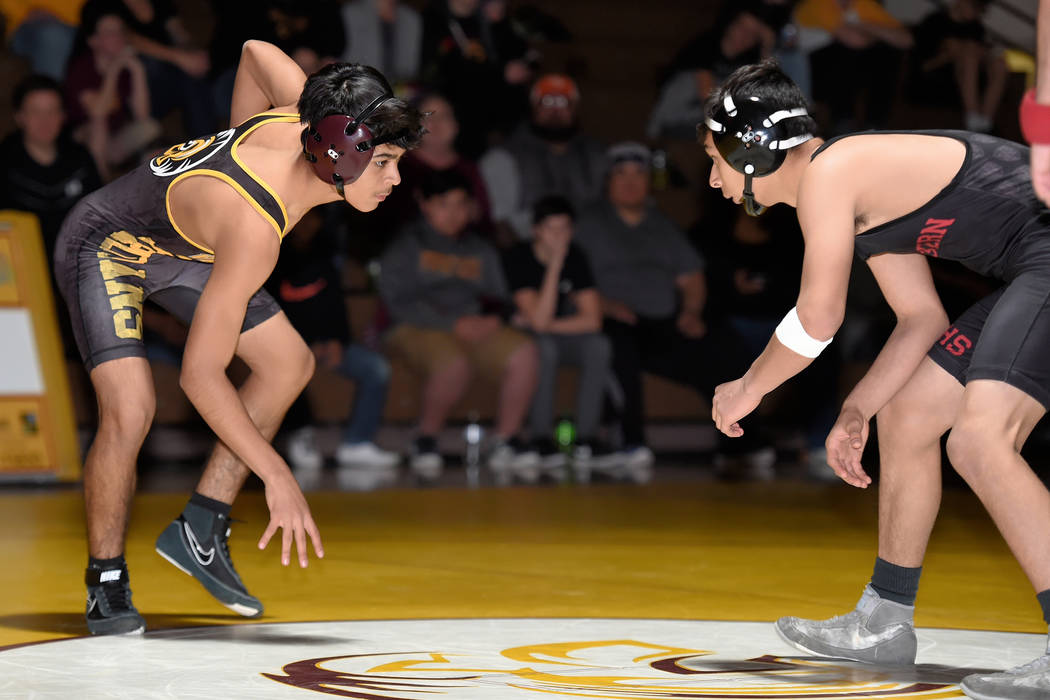 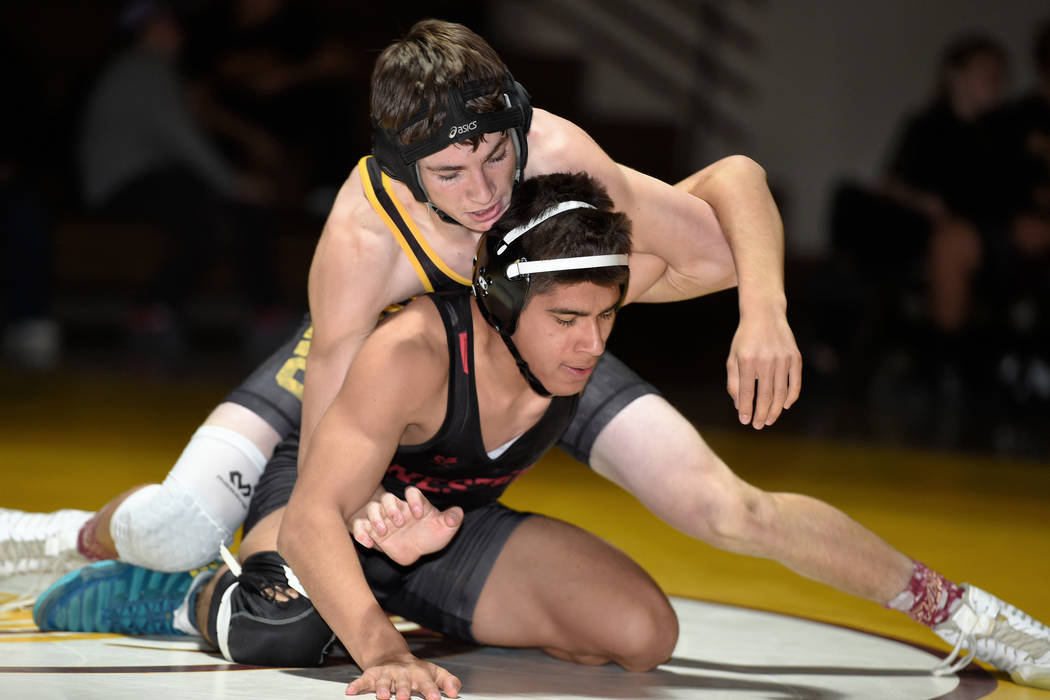 Peter Davis/Special to the Pahrump Valley Times Pahrump Valley wrestlers will compete in the region quarterfinals, with opening ceremonies scheduled for 3 p.m. today at Moapa Valley High School. Quarterfinals will take place today, with the semifinals at 10 a.m. Saturday and the finals at 3:30 p.m. Saturday.

Four years ago at Boulder City High School, the Trojans sent out two wrestlers at 195 and both responded, as Jax Clayton won the region championship with a second-period fall over Abraham Preciado in the final. They went on to place first and second again at state, which was held that year at the Winnemucca Event Center.

This time around, it’s senior Tristan Maughan and sophomore Dylan Wright in the same class for the Trojans, and should they each place at 160 in the regions, they will go to the state championship, again in Winnemucca.

“We’re going to be in the same weight class, and we’ll be on opposite sides of the bracket,” said Maughan, who has excelled at 160 this season. “If we both win our semifinals, we’ll see each other in the final and compete for first and second. And the same could happen at state.”

Wright, who has wrestled at 170 and 182 this season, expects the typical advantage that comes when a quality wrestler is able to drop down a class.

“I know most of them,” Wright said of the competition at 160. “I think I’m going to be a lot bigger than all of them. Boulder City is pretty good. Up north there are a few kids that are pretty good.”

Just mentioning the kids up north shows you Wright has not exactly been focused on the regions as a goal. As a freshman, Wright finished second there at 145 and did the same thing at state.

“We definitely have been looking at state, trying to place well at state,” he said.

Wright acknowledged it would be a little tough to get down to 160, but he has been dominating wrestlers slightly heavier than he is all season. Maughan said his younger teammate told him about a week and a half ago that he planned on dropping down, but staying in that class also made the most sense to the senior.

“Dropping to 152 is just unhealthy for me right now, so I decided to stay,” he said. “I feel good. I’m ready. I haven’t had any injuries or anything.”

“At 160, both Dylan Wright and Tristan Maughan should place well,” Rieger said. “Isaak Cruz at 145 has been wrestling well. He’s 4-0 on our side (vs. the Sunset League).”

Cruz finished fourth at 132 last season and made a quick exit at state. He expects better results this time around.

“I’d be satisfied with a state title,” he said. “That sounds like a great thing to shoot for.”

Just getting to state would be an accomplishment for many of the Trojans, as Rieger expects many of them to have tough paths at Moapa Valley. The top four in each class advance.

As for the team competition, going in with three weight classes vacant makes overall success a challenge for the Trojans, who finished third behind Boulder City and Virgin Valley last year.

Part of the struggle is that the more experienced Trojans find themselves in difficult weight classes. Rieger noted senior Spencer lane has wrestled well but that 138 is a loaded bracket. And junior Armani McGhee will be in a very deep heavyweight division.

“Armani McGhee is going to have to really step up to qualify, which he can,” Rieger said. “Every school has a tough kid here and there. It’s going to be tough to qualify, but that’s what we expect.”

Exceeding expectations will depend heavily on freshmen, and Rieger said that while they have done well, the postseason is a different animal. But they do carry confidence into the regions, none more than Henry Amaya at 132. Amaya takes a 27-4 record to Overton.

Every Trojan asked, including Rieger, said that the one school in the region they haven’t wrestled, Boulder City, figures to be a challenge, although exactly where the Eagles pose the biggest challenge remains to be seen.

“I have not wrestled Boulder City yet,” he said. “I’m not sure if they’re good, though. I’m pretty sure I’ve wrestled everybody else. Not much I have to worry about.”

Wrestling gets underway at 3:15 p.m. today at Moapa Valley. The finals will be at 3:30 p.m. Saturday, with the state championships slated for Feb. 8-9 in Winnemucca.