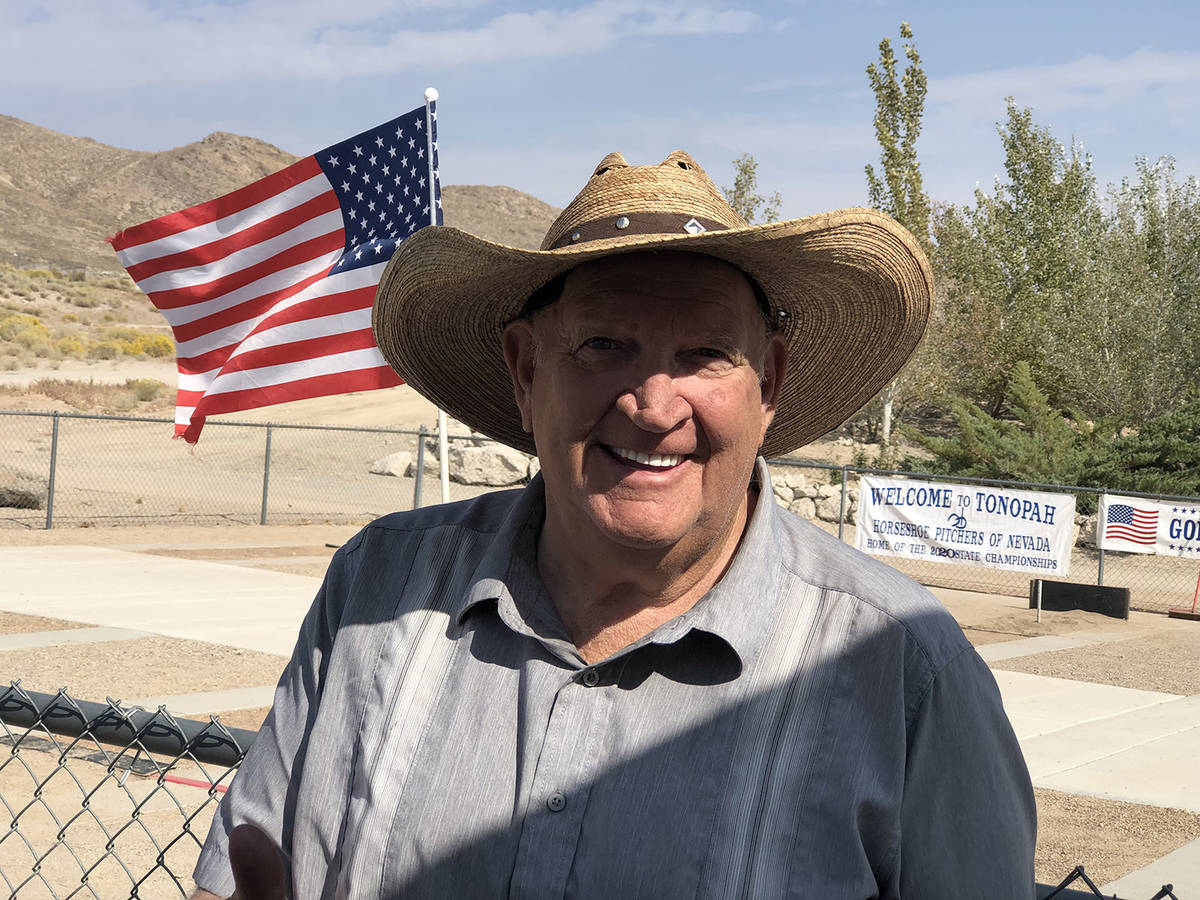 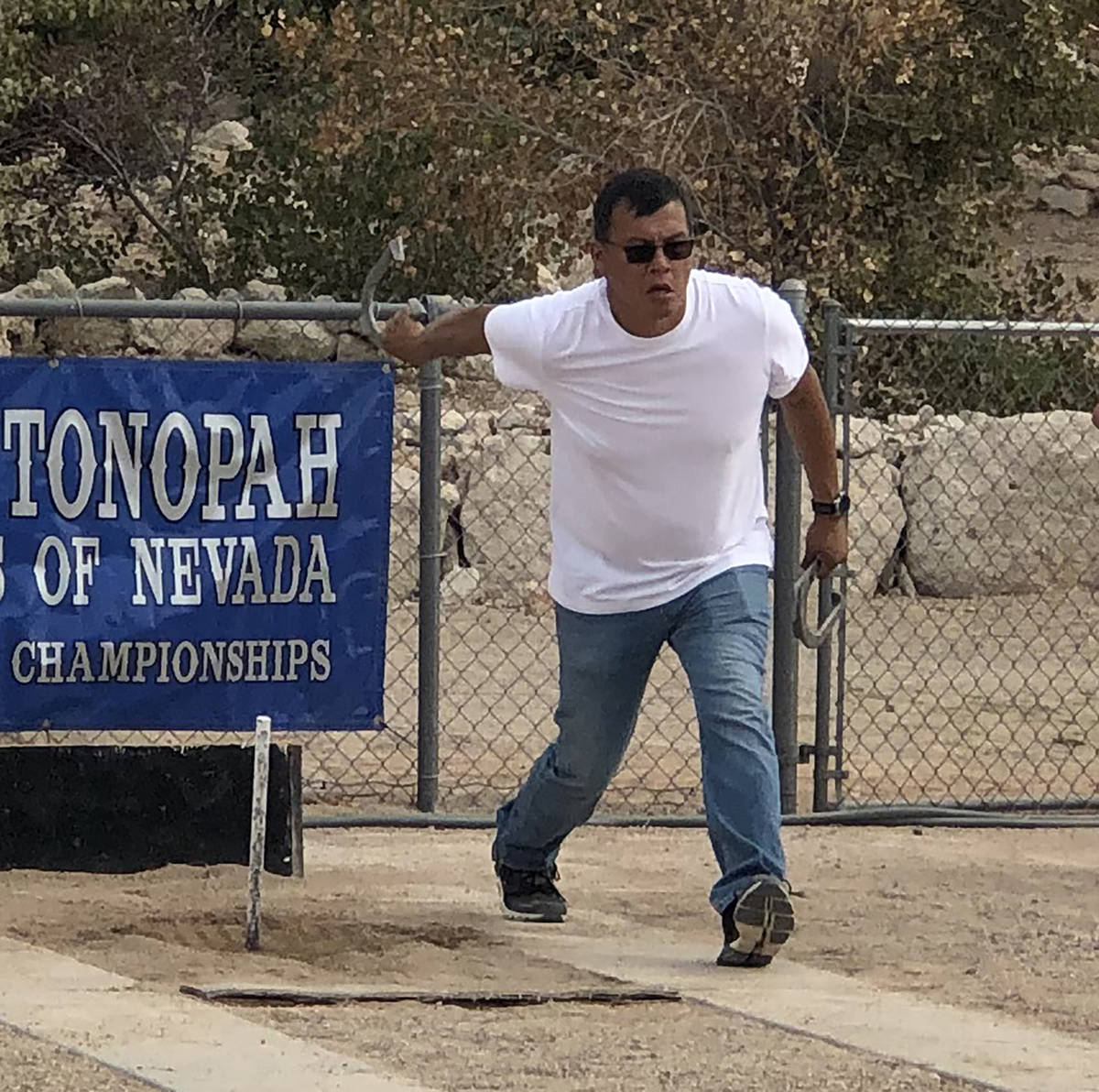 Tom Rysinski/Pahrump Valley Times Foster Kenton of Hawthorne nailed ringers on more than 64% of his pitches in winning the Men's Championship division at the state horseshoe pitching championships Saturday in Tonopah. 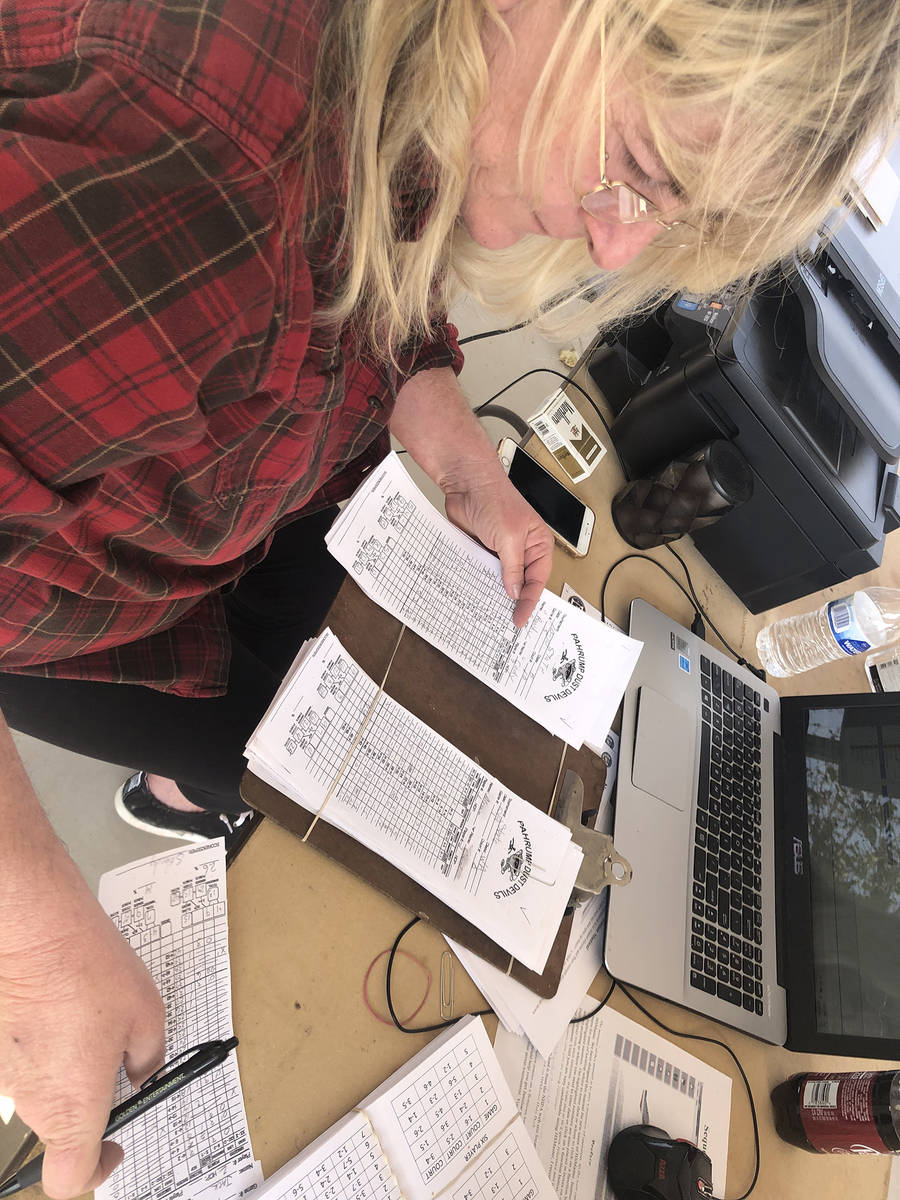 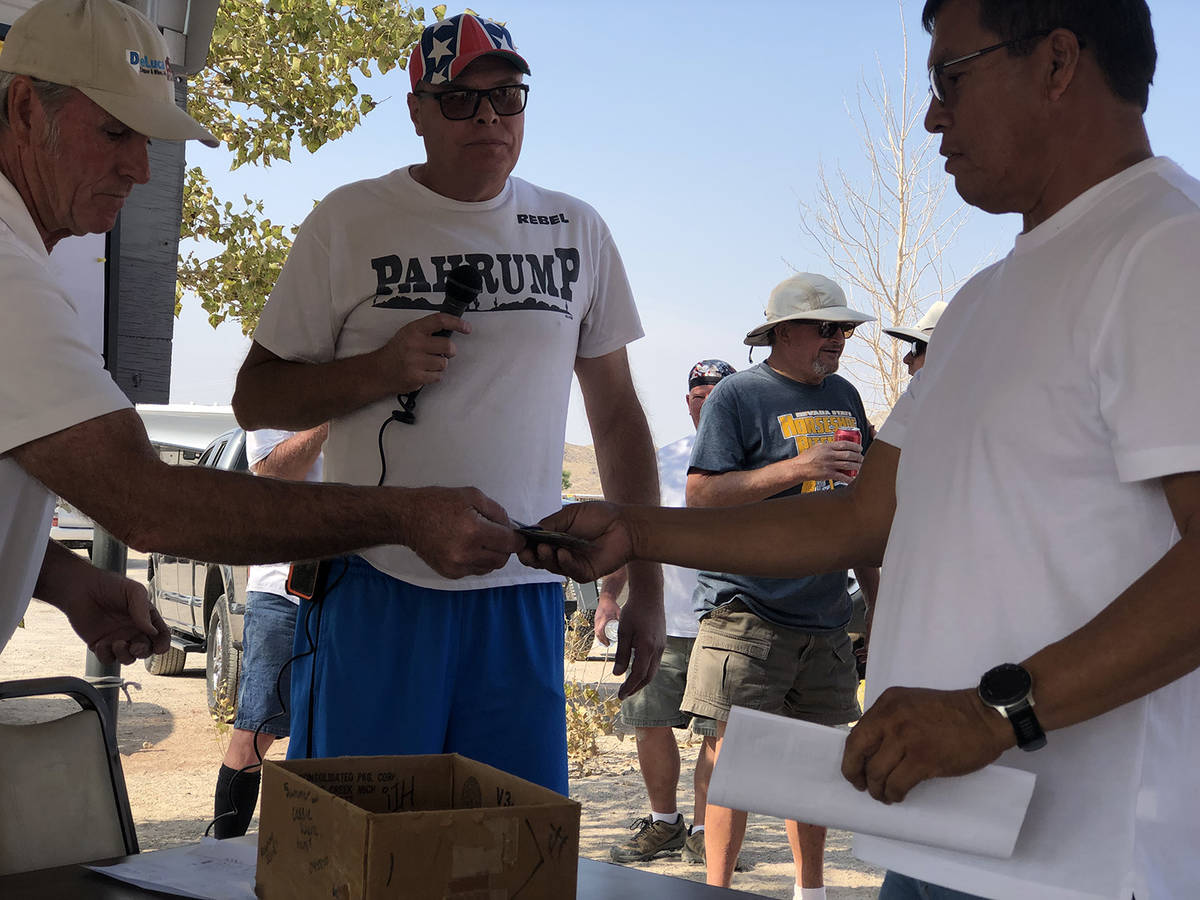 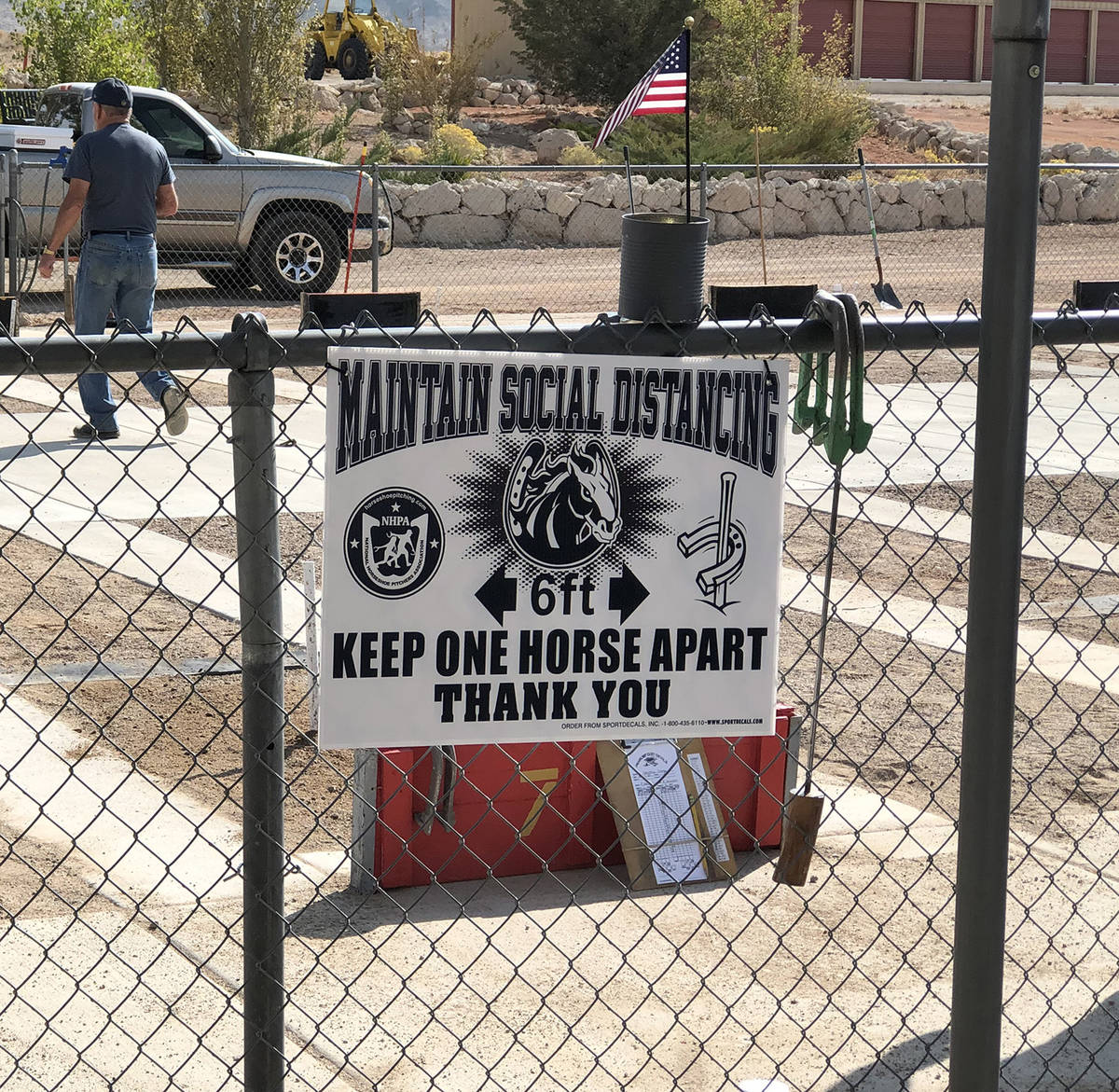 Playing through pain is a common theme in sports, especially football where it’s hard to avoid pain.

And aging does little to help, with minor aches and pains a fact of life and more serious issues taking longer to heal than in younger people.

But there was Dennis Andersen on Saturday morning in Tonopah, pitching a horseshoe 200 times in the Nevada State Horseshoe Pitchers Association championships at the Joe Friel Sports Complex. Andersen went 4-0 against Ken Jose of Tonopah and Geno Dawson of Reno to capture the Elders division title.

“I’ve been kind of pushing all day, sore and everything else,” Andersen said. “This year’s been tough on me. I’ve been going through a lot of injuries that just pile up. I always play hurt, and it’s not good, but I played very well today, and I’m glad of that.”

Andersen did play very well; he was the only Elders division pitcher to be anywhere near his entering ringer percentage, hitting on 40% of his pitches against his 41.37% entering percentage.

By the numbers, Andersen was the favorite in the division, but he didn’t consider himself a lock.

“All games are hard.”

The most dominant performance of the day came in the Men’s Championship division, featuring the top seven players by entering ringer percentage. Nobody could touch Foster Kenton of Hawthorne, who went into the tournament hitting 60% and managed to top it, nailing 155 ringers during his 6-0 run that earned him $125.

Kenton’s steamrolling of the Men’s Championship division included wins of 61-7, 56-5, 59-13, 33-11, 48-5 and 63-9, scores that would suggest playing Kenton gets in opponents’ heads. In any event, everyone else was playing for second place, something they suspected from the outset.

And that battle came down to Las Vegans Dan Dunn and Joe Kalache, who each went 4-1-1 to tie for second place. Their head-to-head battle was a 21-21 tie, but Dunn totaled 215 points for the tournament, hitting 87 ringers, to Kalache’s 139 points and 67 ringers, so Dunn took home the $80 second-place prize and Kalache settled for third place and $50. Lathan Dilger of Pahrump took fourth place.

Cody McNeely of Gardnerville won the Men’s B division, going 6-0. Randy Salzwimmer of Pahrump finished third, tying for second with a 4-2 record but losing out on the tiebreaker. The Hardys each won a title, with Scott going 4-0 to capture the title in Elders B, while Lela finished 5-1 to win the Mixed division.

There were only two pitchers in the Women’s division, with Allison Breeden of Reno winning three of five games against Carol Lanfair of Gardnerville to claim the championship.

“It was good,” Dilger said. “Not me, I didn’t play well today, but the tournament went well. Tonopah’s a good place … It’s good weather. It gets a little windy in the afternoon, but in the mornings it’s always nice and calm.

“Super, way surprised,” Jose added. “We didn’t expect this many people to show up. The Pahrump guys, they’re die-hards, they would’ve come and we would have had at least 12. But everybody else came in, so that worked out well.”

The number of RVs in the parking lot reflected that. The tournament was scheduled for August but postponed because of COVID-19 concerns, and the thinking is there would have been more competitors for the original date. But the good October weather was one reason for the NSHPA to move the event to the fall next year.

There was strong sentiment to hold the tournament in Beatty next year, but further improvements to the pits in Tonopah swayed the vote.

“The town really did a lot of work for us here,” Jose said. “They brought up a couple of workers and they cleaned it out and fixed the bathroom. They wanted to move it to Beatty, and I said, no, we’re going to do a lot of work here. These are the best horseshoe pits in the state.”

Shading all of the pits is on the agenda in Tonopah, and Jose also said its location gives it two advantages as a state tournament host.