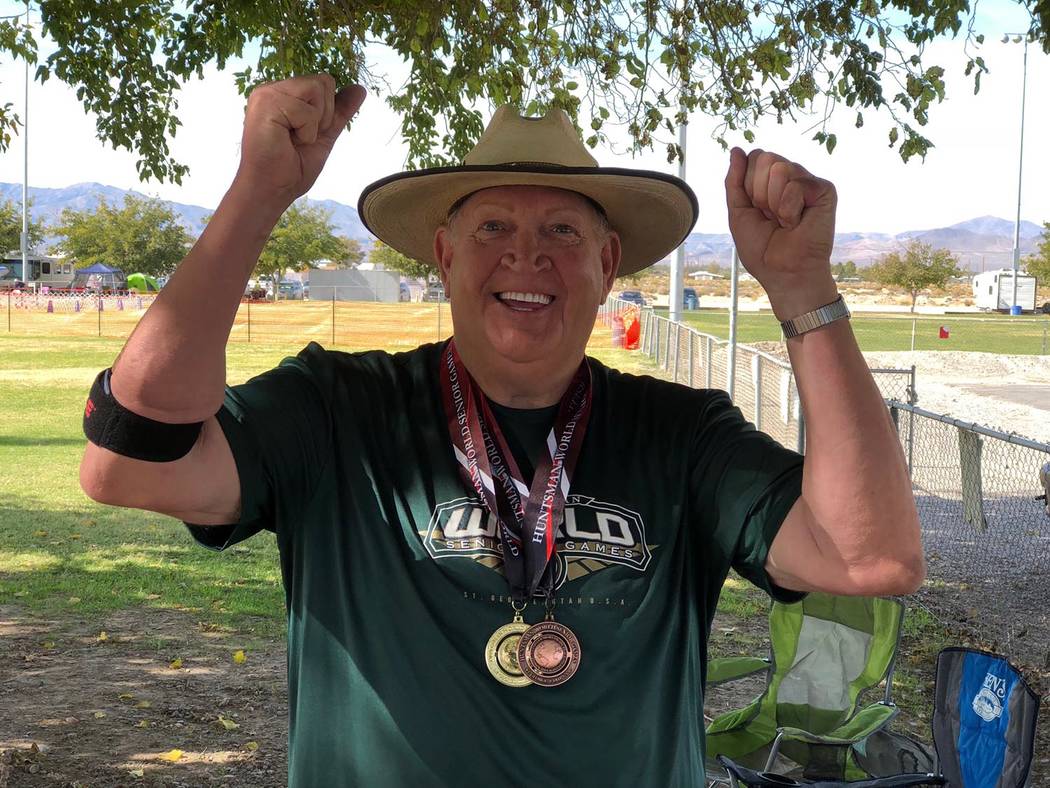 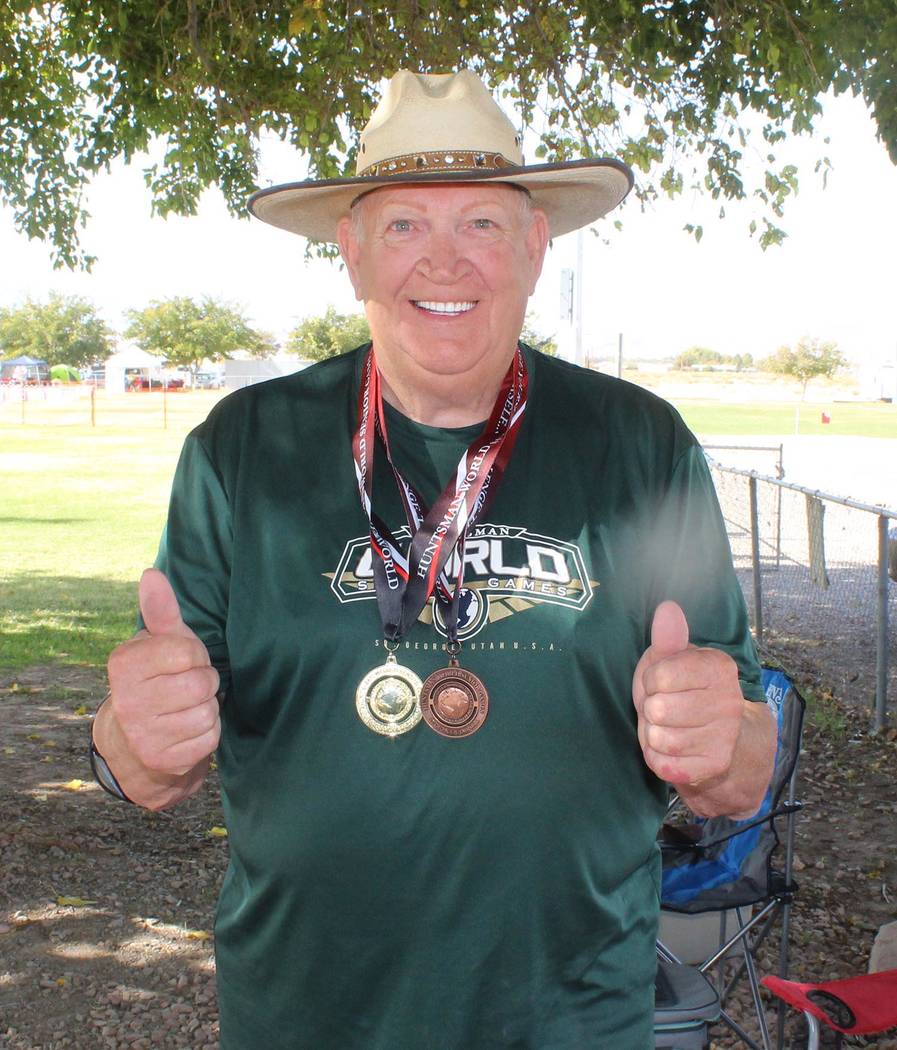 Tom Rysinski/Pahrump Valley Times Dennis Andersen of Pahrump won a gold medal in singles and a bronze medal with Kim Bradshaw in doubles in horseshoes in October at the Huntsman World Senior Games in St. George, Utah. 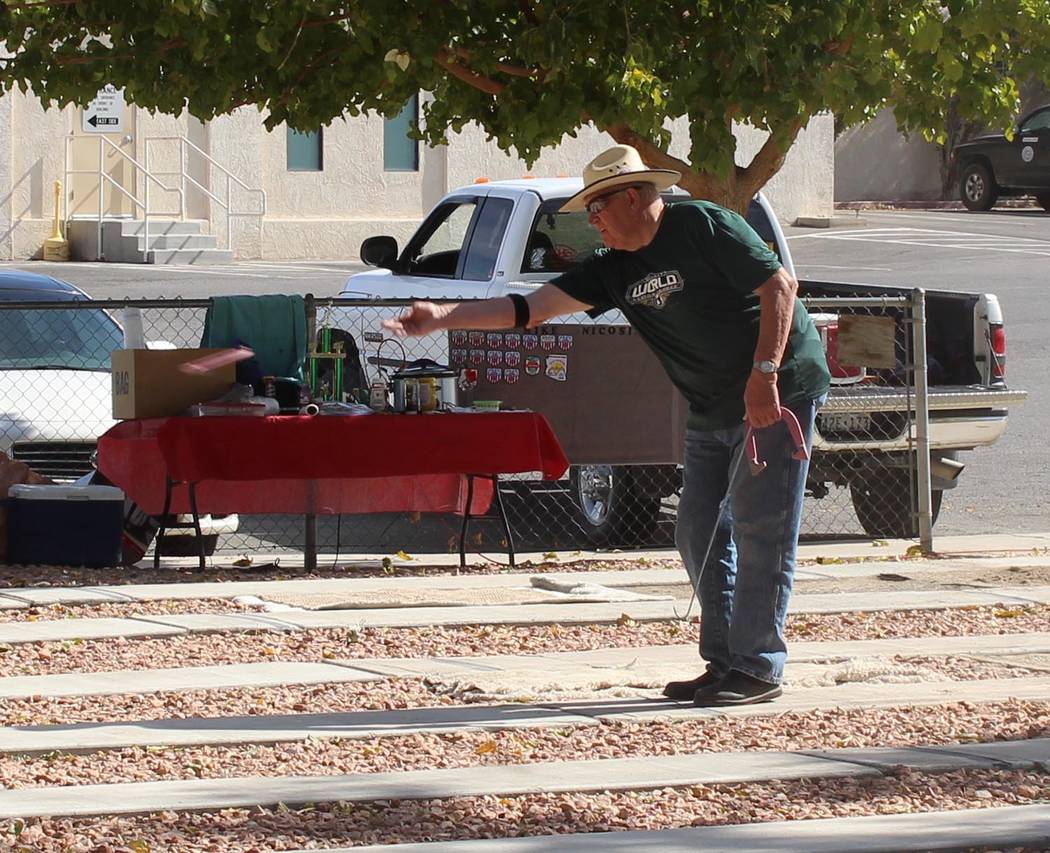 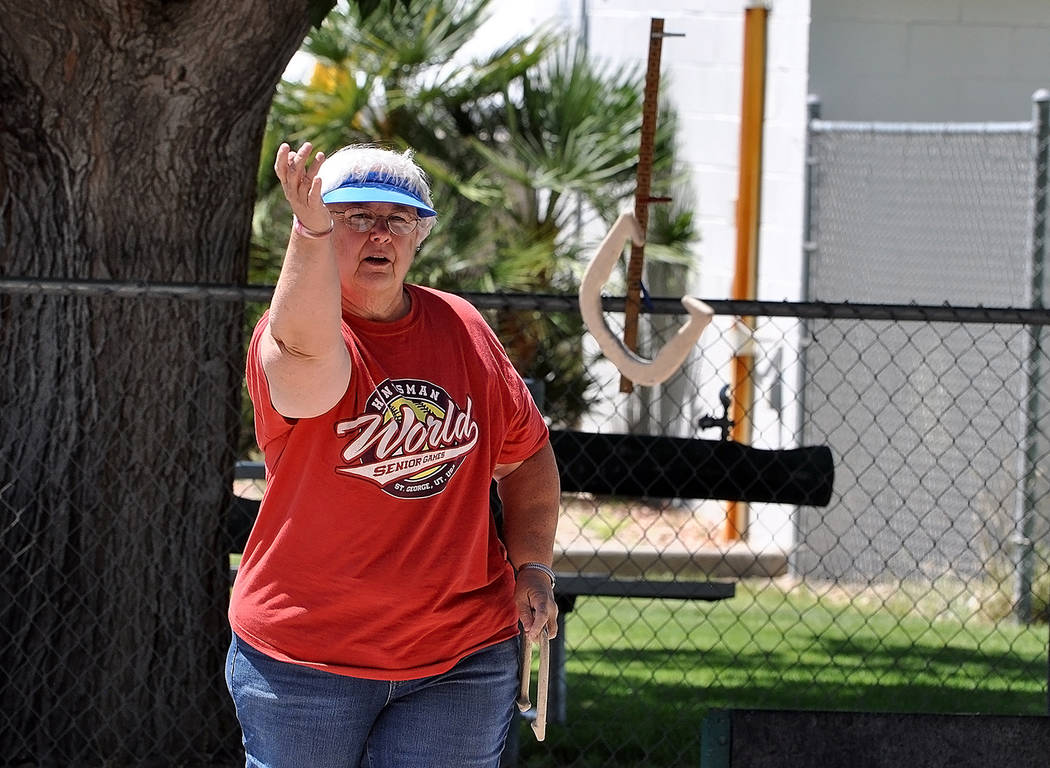 Despite the issues that come with aging, some good things happen as we get older. There are senior discounts, special slot tournaments and getting to pitch horseshoes from 30 feet.

A lot of people don’t know about that last one, but Dennis Andersen certainly does.

In tournaments sanctioned by the National Horseshoe Pitching Association, women pitchers and males over age 70 pitch from 30 feet instead of 40 feet. Getting used to the change is not automatic.

“I had to adjust everything, your throwing, your flip,” Andersen said. “It took me about a week. I was only pitching a week before I went up to Hawthorne.”

Hawthorne was the site of this year’s state tournament in August, and Andersen, in his first competition pitching from 30 feet, finished third. Actually, there was a five-way tie for third in the elders championship, but Andersen got the nod because of his superior ringer percentage of 43.92 during the tournament.

But that didn’t provide a hint of what was to come at the Huntsman World Senior Games, an international event that draws thousands of athletes aged 50 and over from dozens of countries to St. George, Utah, each year. More than 60 competitors were entered in the horseshoes competition, and October marked Andersen’s first trip to Huntsman.

“You enter, then they take your percentage from the NHPA and put you in groups,” Andersen said.

So Andersen found himself in a group of pitchers with ringer percentages between 40 and 50. With him in that group was fellow Pahrump Dust Devils member Kim Bradshaw.

But Andersen won enough to post a 6-2 record, good for the gold medal in his division. The first-time Huntsman champion was understandably excited.

“I was jumping up and down, hollering yabba dabba doo and everything else,” he said. “It was my first time ever winning, and I only started 30 feet two months earlier.

“I could hardly believe it. I was hollering and yelling, and people were saying, ‘Why are you yelling?’ Because I just won gold!”

Bradshaw won the bronze medal in the same division, but she had to work overtime to do it after tying for third place with a 4-4 record. She and her playoff opponent split two games during the tournament.

“Singles I had to go into a playoff to win the medal, so that was kind of exciting,” Bradshaw said. “The first day I beat him really bad, but on that day he had beaten me really bad. The playoff was 20 shoes, and I think I beat him by about 10 points.”

Andersen and Bradshaw teamed up in the doubles competition and came back with another medal.

“So I took gold in singles, and me and Kim took bronze in doubles,” Andersen said. “Kim took two bronze, singles and doubles.”

“The first day of both I pitched quite well,” Bradshaw said. “The second day it seemed like I ran out of steam. At first I didn’t know we did two days. I gave one hundred percent the first day, and then it was, ‘We have to come back another day? Oooooooooooooh.”

That’s a lot of horseshoe pitching over two days.

“We were throwing 40 shoes in singles and 30 in doubles,” Andersen said. “First day you’re just nervous and the adrenaline is up. The second day I settled in. One game I had five doubles. I won all of the games the second day.”

Bradshaw had the opposite experience, going 3-1 on the first day and 1-3 on the second before winning the playoff. Of course, the Huntsman Games are nothing new for Bradshaw. Although this was her first time competing in horseshoes, she has participated in softball for 10 years.

“Out of the 10 years, I won medals at least seven, both in the A group and in lower divisions,” Bradshaw said. “In softball, they can have up to three divisions if they have enough teams.”

Bradshaw said she enjoys making the trip to St. George and is glad such a large event is a reasonable distance from home.

“It’s almost overwhelming the first few times because there are athletes everywhere,” she said. “There are so many different countries, and all the states are usually represented. You just meet everybody. It’s pretty awesome.

“The town just accepts you. Everybody’s kind. I love to go to the Huntsman, and it’s usually organized really well.”

So Bradshaw added to her medal collection and Andersen won gold on his first trip. Despite moving to 30 feet relatively late in the year, Andersen can say he had a strong season.

“I took third in Hawthorne at state, then gold at Huntsman,” he said. “I think I did pretty good.”