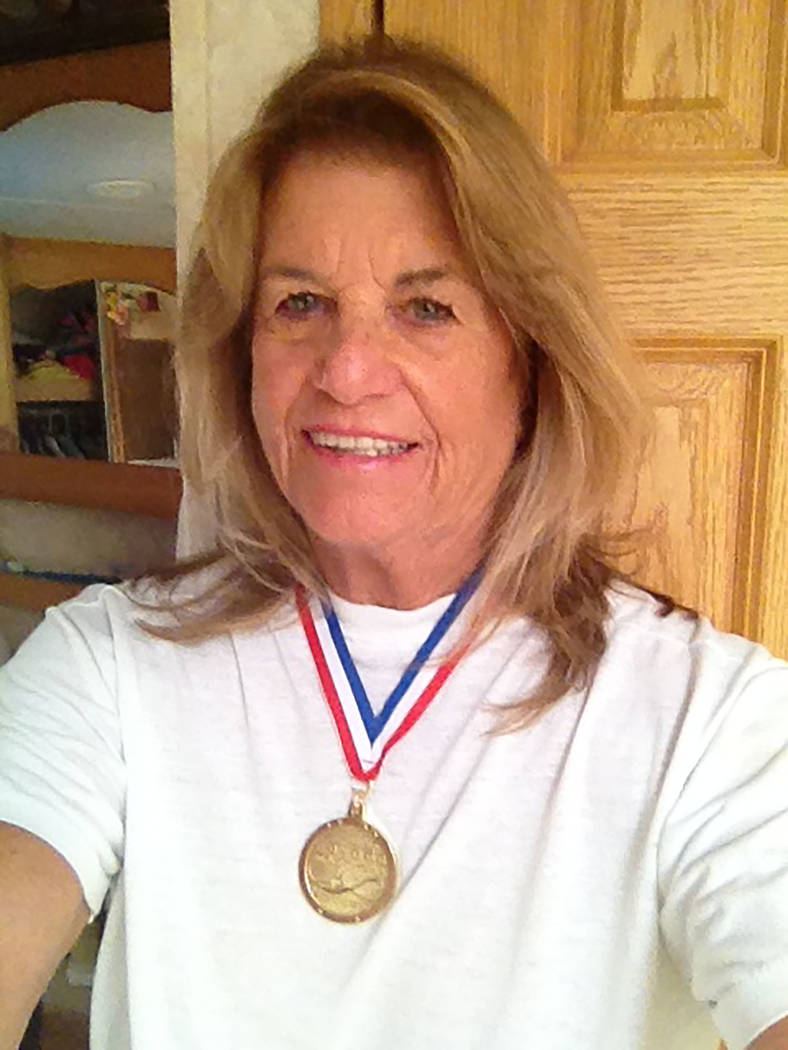 Cathy Behrens/Special to the Pahrump Valley Times Pahrump resident Cathy Behrens poses with the gold medal she won in the 75-79 50-yard freestyle at the Nevada Senior Games.

After winning gold in her first Nevada Senior Games last year, Pahrump resident Cathy Behrens decided to try for two this time around.

The first half of her weekend didn’t go quite as planned, as she competed in the 75-79 50-yard backstroke Oct. 6 at Pavilion Pool in Las Vegas.

“I was disqualified the first one,” Behrens said. “I didn’t know the rules. … If I didn’t win the gold, I would have won the silver. I was swimming and I came to the end and didn’t reach the wall. You’re swimming backwards and you can’t see anything.

“I couldn’t see the wall and felt for sure it had to be there, so I turned over and reached the wall from the front. You have to reach it on your back. I got out of the water not knowing that, and you know something is up when the guy dressed all in white is coming toward you. And he told me they had to disqualify me.

“I kept a smile on my face. What are you going to do? It was a perfect learning lesson.”

But that meant the very competitive Behrens was laser-focused on winning her other event, the 50-yard freestyle, which took place the next day.

“My event was the second to last, so it was a very long morning for me,” she said. “I was out for the kill. I wasn’t going home without a gold. I was really pushing myself because I didn’t want to leave there empty-handed.”

She didn’t, finishing first in 1 minute, 5.98 seconds, more than 12 seconds ahead of the second-place finisher.

“I came home not exhausted from the swim, but what tired me was the light stress of it all,” Behrens said. “I took Monday off, and I took Tuesday off. I said, ‘I’m not going to swim, I’m not going to do anything.’ And I didn’t feel good.

“When you do something six or seven days a week, your body wants to do it. Wednesday, I was back in the pool, and I’ve gone every day since. I just felt like a big lump. I’ve had people that do exercise that say it energizes you, and I never believed it. But now I know it really gives you energy for the rest of the day. It’s like taking a happy pill when you do something that you’re passionate about.”

Behrens, 76, has her sights set on the nationals, and she is almost sure she has qualified. If she did, she plans on being there, not just for the competition but to be part of the scene.

“I think there are going to be 10 or 11,000 people doing this,” she said of the event slated for June 14-20 in Albuquerque, New Mexico. “It’s huge. There’s going to be a lighting of a torch, there will be a celebration of athletes. It’s going to be just like the regular Olympics.”

“I’m a member there, it’s a campground for snowbirds,” Behrens said. “It’s very nice, a beautiful park. They’ve got a complete workout room and a pool, and the pool’s heated. They turn off the heat in November, but Nationals are in June. I can’t take six months off, so you’ll see me in a wetsuit. I got it last year.”

While Behrens is excited by the prospect of being part of the National Senior Games, she knows what she’s getting herself into.

“I swam this in 65 seconds,” she said. “The girls at nationals at my age are doing this in 38 seconds. I looked at the stats, and I’m right in the middle of the times from two years ago.

“The reason I want to go to this one is that Albuquerque is relatively close. It will be a great experience, and I plan on going for about five days.”

Until then, Behrens will relish the memories of the last competition and look forward to the next one.

“It’s my passion, and I think it’s really important to have a passion as you get older,” she said. “There are women 85 years old in this competition, and they’re swimming well. These are super people, and I feel privileged to be part of it.