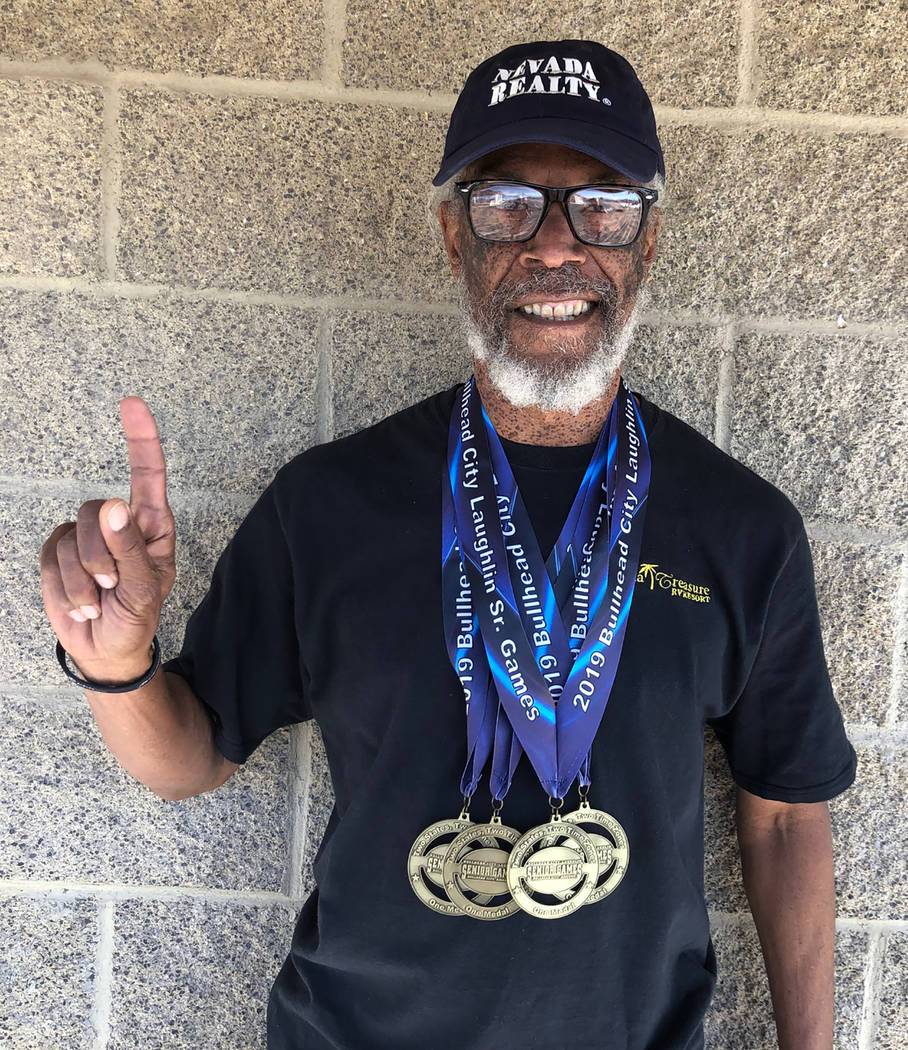 Tom Rysinski/Pahrump Valley Times Marvin Caperton, 64, of Pahrump won the 50-, 100- and 200-meter races and was part of the winning 4x100-meter relay at the Bullhead City/Laughlin Senior Games. 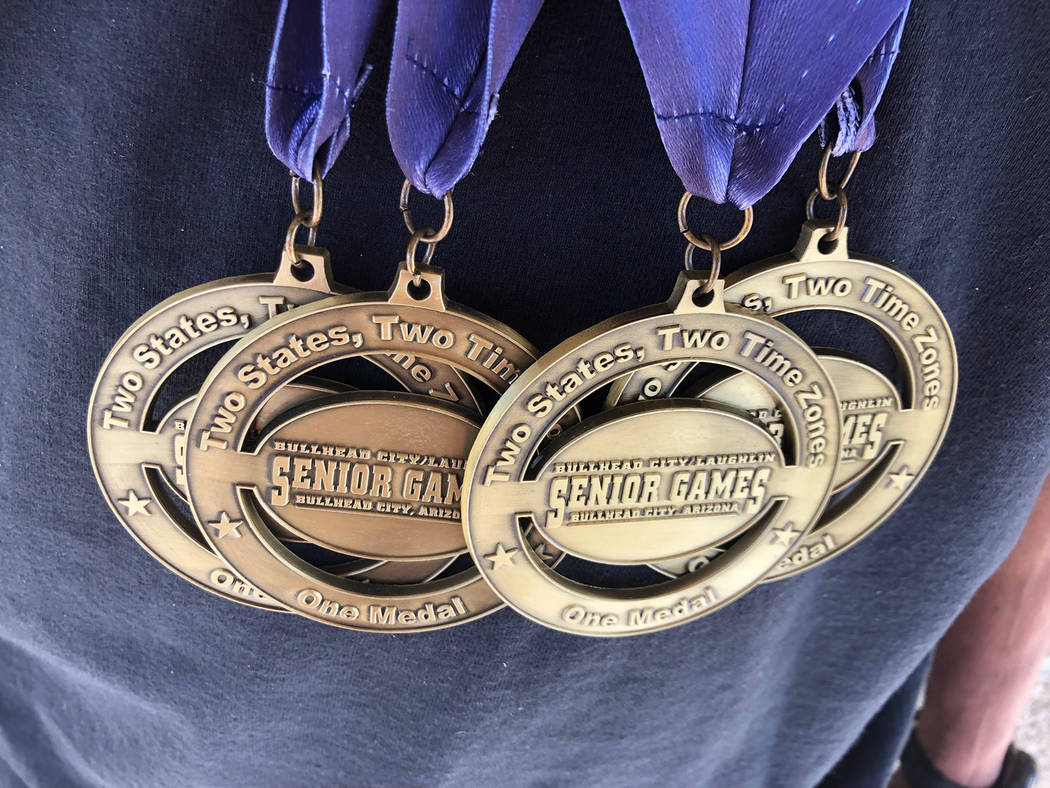 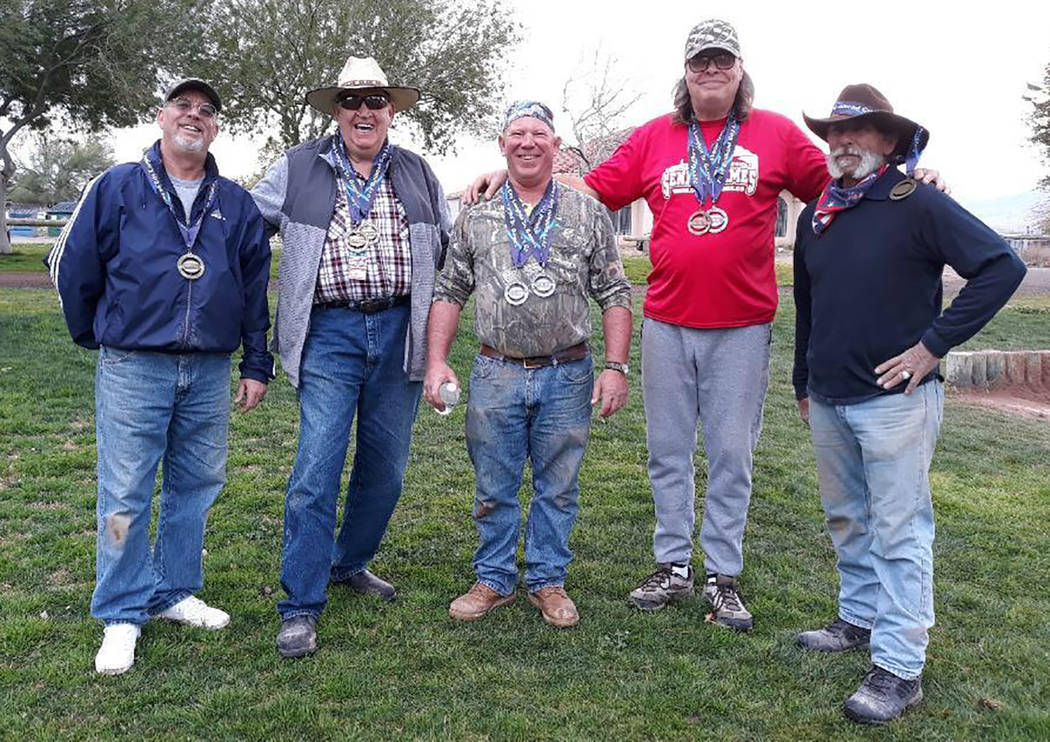 Four this time. All gold.

Perhaps, but Caperton was also in good form.

“So I really picked up in the 2,” he said. “I’ve been running hills and doing different things to work on different muscles, and it’s starting to pay off.”

The fourth medal came in more casual fashion, as a pickup team was formed to run the 4 x 100. “They couldn’t find a baton,” Caperton said. “They took some foam you would wrap around a pole for the pole vault. They wrapped it so hard and put some tape on it, and that was our baton.”

But Caperton won more than four gold medals at the meet. For him, the best part was landing a new coach. The starter recognized his name and remembered him running track in college. It turns out the starter was Bruce Frankie, a well-known sprint coach in Arizona.

“We talked, and I said I need coaches and I need to take a second, second and a half off my time,” Caperton recalled. He said, ‘You send me videos, and we’ll go from there.’ We’ve already had correspondence, and he’s already telling me what I need to do.

“It’s a little harder than what I’ve been doing. That was the greatest thing that came out of that meet for me. I know what I’m doing, but I’m not a coach. I’m a runner.”

Caperton said he has been pushing himself a little harder, working out since October, just after his last cataract surgery. “The people at the top take it more seriously than I do,” he said. “I can’t go every day. I go every other day.”

Caperton said the next meet on his calendar, March 23 in Mesquite, promises to be tougher than the last one. “I’ve looked at some of the times that were turned in, and they are very similar to mine,” he said. “That means I’ve got to work harder.”

Helping Caperton turn that hard work into results at meets are his sponsors, and he was eager to express his appreciation to Tim Hafen, Cathy Slaughterback, Ray Guin and Drew of Drew’s Tires for sponsoring him for the Bullhead City/Laughlin event. “Big thanks to them,” he said.

While Caperton was dominating the sprints, Pahrump residents also were dominating pitching events, winning nine medals in horseshoes and four in cornhole. Lathan Dilger brought home the most medals with four, while Dennis Anderson won gold in both singles and doubles competitions. Dok Hembree also came home with gold, winning a singles competition. “I won eight out of my nine games,” said Hembree, who said the competition was “pretty good.” The weather did not cooperate, as light rain came three different times during the competition. “It was a nasty day to be throwing,” said Hembree, who thanked his sponsors, The Hideaway and Dok-Tor Signs, his own company, for their support.

The 2019 horseshoes season is almost here. The next Nevada Horsehoe Pitchers Association-sanctioned tournament will be Feb. 16 at Leavitt Family Park in Las Vegas. The Pahrump Dust Devils pitch twice a week at Petrack Park’s pits near the pool, usually meeting at 10 a.m. Wednesdays and Sundays.