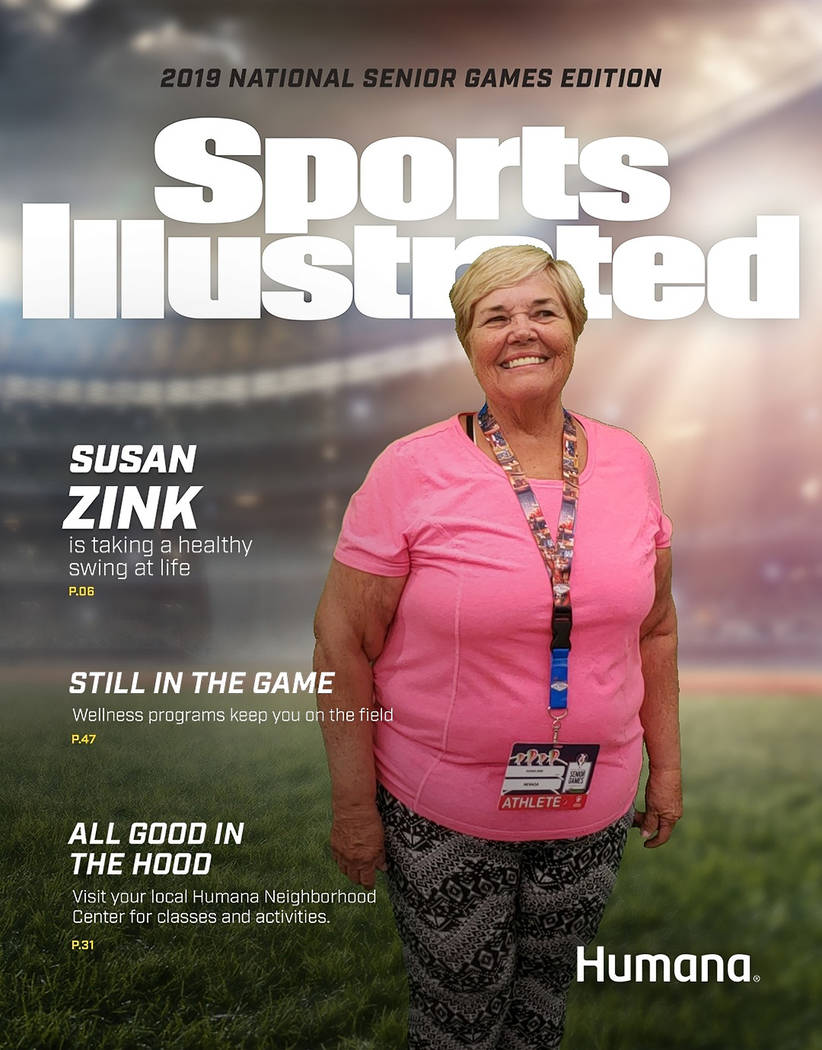 Special to the Pahrump Valley Times Susan Zink of Pahrump poses for a mock Sports Illustrated cover during the National Senior Games in June in Albuquerque, New Mexico. 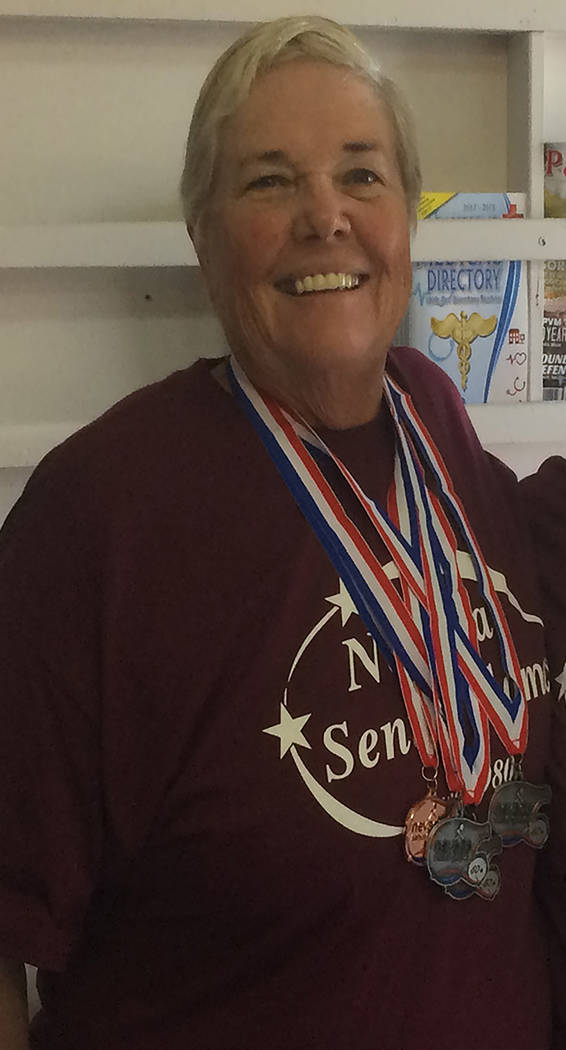 Special to the Pahrump Valley Times Susan Zink poses with some of the medals she has won at the Nevada Senior Games, in which she will swim again in October in Las Vegas.

From a purely competitive standpoint, it would be hard to have a rougher trip to the National Senior Games than Susan Zink.

The Pahrump swimmer competed in the 100-yard breaststroke in Albuquerque, New Mexico, in the 65-69 age group and finished 23rd in a time of 3 minutes, 19.47 seconds. That was dead last.

Zink then competed in her final event, the 50-yard butterfly, finishing 16th in 1:37.47. Yup, last. So last that she was swimming for 26 seconds after the 15th-place finisher, Caroline Kemerling of South Carolina, finished.

You think she had a bad time? Think again. Zink had a blast.

“Look, you couldn’t do any worse than I did,” she said. “I came in last in everything. I’m still alive, I’m still in the pool, and I still have a smile on my face. It’s too late to be inhibited. We need to smile and make friends and have a good quality of life.”

One reason Zink struggled in the pool was the altitude in Albuquerque.

“You need at least two weeks, if not more, to acclimate, and I just don’t have the money to do that. And a lot of people were struggling with 5,900 feet. It’s higher than Denver. I tried to turn it on, and there was nothing there. It was so frustrating.”

But the unsinkable Zink nevertheless is thrilled just to be able to swim 100 yards, whether anybody is timing her or not. Her enthusiasm for staying — or getting — fit at any age is infectious, and not coming back with a medal isn’t going to change that.

“It’s great to win, it’s great to do a really good time, but even in the regular Olympics, all we ever see are the medalists, and we don’t get to see all the sports,” she said. “There are literally tens of thousands of athletes who go knowing they’re not going to win, but they go for the experience. And it is an experience. You make new friends from all over the United States. If you have the ability to go and do that, why not?”

Watching others who have that ability was inspiring to Zink, especially those who have challenges other than age.

“There were people swimming who were handicapped, and I was so happy to finally see that,” she said. “I saw a couple of gentlemen who only had one leg, and they competed along with everybody else. And they were doing OK. The point is not to win, the point is to participate.”

Then there was Hurricane.

Julia “Hurricane” Hawkins of Louisiana is 103, the oldest woman to compete on an American track. She ran the 50- and 100-meter dashes in Albuquerque, setting records in both because she was the first to compete in the 100-plus division. The retired teacher lives on an acre of land in Baton Rouge and says yard work keeps her young.

Meeting someone like that would be a highlight of anybody’s trip.

“I sat with her, and there was another gal in her 90s who had five gold medals,” Zink recalled. “Hurricane, she’s 103 and she’s amazing. She’s totally a hoot. She’s got personality up the yin-yang.”

And it wasn’t just Americans that Zink encountered in New Mexico. Many other countries have no such event for senior athletes, so competitors from other countries come here.

Zink had plenty of issues with Albuquerque as a host for the event, citing transportation and efficiency among those areas in which the city paled in comparison with 2017 host Minneapolis-St. Paul. So will Zink head to Fort Lauderdale, Florida, in two years for the next National Senior Games?

“Yes!” she said without hesitation, the locale bringing out the former travel agent in her. “There was a huge booth promoting the 2021 games, and I said, ‘You know you’re one of the huge cruise departure points in the U.S.?’ And the girls went, no. Wouldn’t it be great fun to celebrate, relax or lick my wounds, especially if I go with a bunch of people who are also licking their wounds, on a cruise?

“If it’s going to cost me $600 or more to get to Florida, then we can get on a cruise for $800 to come home, why not? I hadn’t even gotten checked in yet and I was already drafted to help put that together. Those are the kinds of things that can happen when you get out there.”

In addition to being drafted to plan a cruise, Zink also was recruited to be an official part of the Nevada Senior Games.

“I met a gentleman whose name is Ron, and he’s the president of the Nevada Senior Games,” said Zink, referring to Ron Barco, a retired postal employee from Baltimore who has lived in Las Vegas since 1991. “He drafted me for the board of directors.

“I think that more people would attend if they knew about it and knew how many different sports there are. And they are fun.”