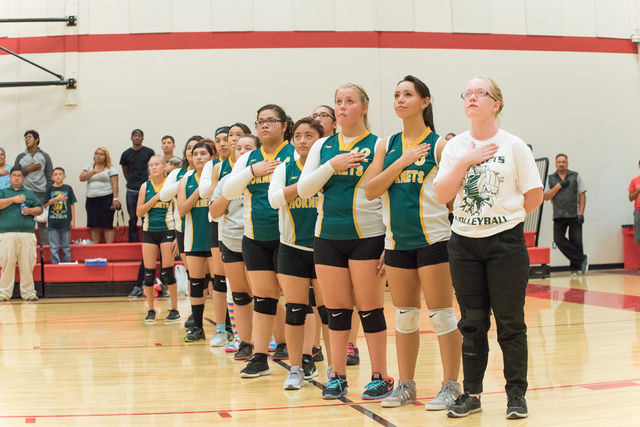 Skylar Stephens / Special to the Pahrump Valley Times Beatty volleyball respects the flag and stands tall during one of the games this year. 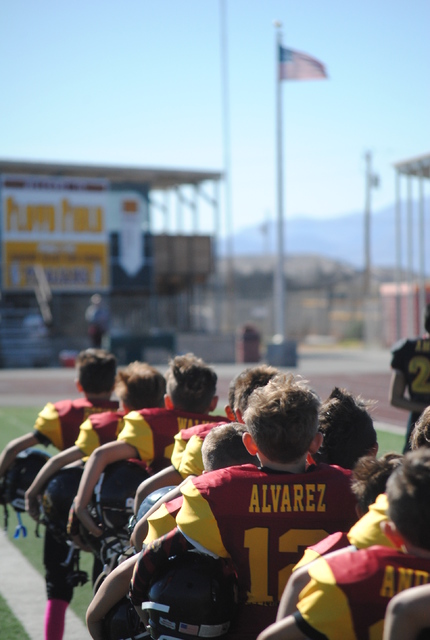 Charlotte Uyeno / Pahrump Valley Times The littlest football team on the field in Pahrump properly respects the flag. Adults can learn from kids. 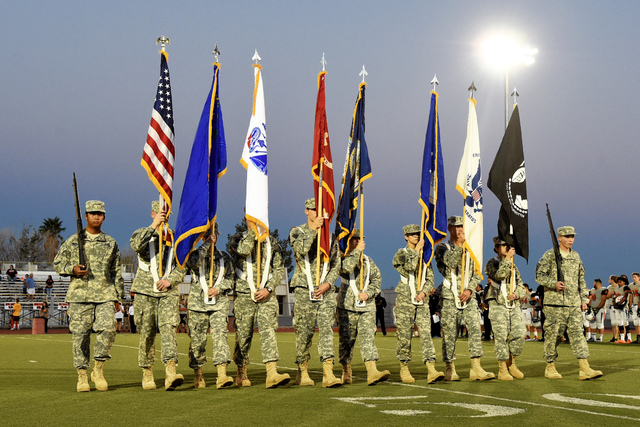 Peter Davis / Special to the Pahrump Valley Times The Trojans JRROTC Color Guard shows the proper respect for our flag at one of the home football games this year. 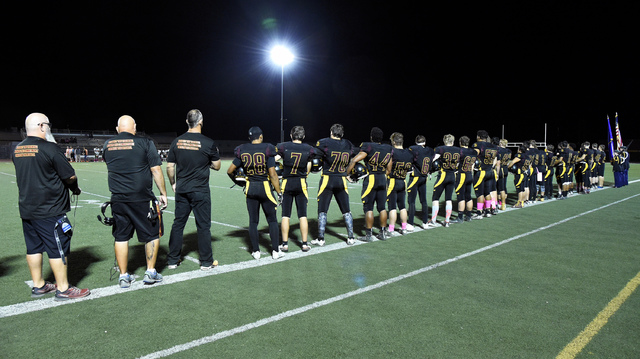 Peter Davis / Special to the Pahrump Valley Times Pahrump's varsity football team shows the proper respect for our flag. They probably could beat the 49ers this year too.

Sometimes disrespect can go too far. In some cases, it can catch on and spread.

That could be what 49ers quarterback Colin Kaepernick was trying to pull off when he took a knee for the first time at the beginning of the season. It has spread like a disease throughout the NFL.

After seeing Kaepernick doing this all season you would think this would be a catchy thing with the teens too. Almost like with our generation, the burning of the bras, wearing blue jeans to school and donning the peace sign.

But with this new generation, they are sticking to what they believe in and not being influenced by the adults that surround them.

Sure, Kaepernick has the right to protest and all. I am just glad his negativity hasn’t infected our kids. Sometimes the younger generation can teach us something.

So far in Nye County, there have been no Colin Kaepernick-type protests by high schools in our area and I am glad. I am proud that our youth have stuck with the flag.

All throughout the county at every age group I see the kids being patriotic.

Thanks to the photographers from around the county who captured these moments for posterity we can see firsthand the flag is respected and loved.

Some people are so fed up with the NFL that they are boycotting games or the 49ers.

So that is a kind of disrespect on one level.

There is also the kind that stabs you in the back and is hard to pick up at first.

We all have done something similar to this. A friend or family member who we don’t like doesn’t get invited to dinner and is disrespected, but it’s done on the DL (down low) and you say real sly and slick-like, “Oh I am so sorry, the invitation must have been lost in the mail.” The “it was lost in the mail thing” can only go so far though. So there is the “omission” game, which is disrespect by omission.

A perfect example of this is how our town is treated by its neighbor Las Vegas. The town of Pahrump was disrespected in the Nevadapreps this morning in “Fielders Choice.” It was subtle. That way they can come back and say, “So sorry, we forgot.”

In the column, they picked three Vegas teams in the 3A (three out of four and we were the fourth team ) to write about and left us out. Was it intentional? I think so.

This is what they said, “Let’s see if I can continue my hot streak with a few close matchups on this week’s schedule.”

Meaning they think Desert Pines and Del So will be close—my eye. I mean, come on Fielder, that game will be a blow-out and wasn’t even worth mentioning, but because we were the newcomer to the playoffs this year, he saved his precious space and left us out.

In other words, (pardon me while I spell it out) the Pahrump Valley vs. Moapa Valley wasn’t worth mentioning, despite being the better game.

That, my friends, is disrespect at its highest level.