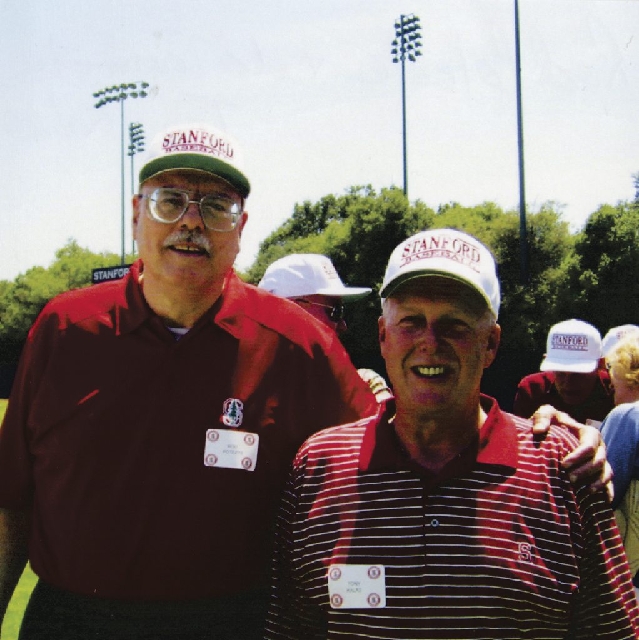 In 1989 while watching the Giants vs the A’s in the 1989 World Series, Retired Pahrump Valley High School teacher and coach Rod Poteete took out his old baseball cards from a shoe box and started going through them.

The World Series had been delayed because a large earthquake hit the area and canceled the series.

Poteete said this gave him a lot of time to look at his old cards. The cards were mainly from the 1950s but after his preview of what he had his interest snowballed. He has not stopped buying cards since.

Poteete has many accomplishments in his life. Besides teaching for over 35 years and helping to break ground at PVHS, Poteete played baseball for the Stanford Cardinals baseball team. He was a pitcher and took Stanford to the college world series. He even played for the minor league Dodgers under manager Tommy Lasorda.

No wonder Poteete’s love for baseball has led him to having one of the largest Stanford baseball card collections ever amassed.

According to baseball card expert Steve Haws of Legacy Card Store in Las Vegas, Poteete has just an average collection if you were to go just by numbers. Haws has been a collector for over 30 years.

“There is one kid who has one of the largest private collections in the city at two million cards. He is famous for having all his cards autographed. Then there is Burbank Sports Cards who have a collection of over 40 million cards. So based on numbers, Poteete’s cards are average, but it is what he collects that makes his cards valuable.”

As a kid, Haws used to come into the store and see Poteete. He says Poteete used to tell him great sports stories about the athletes from Stanford. Hearing stories from people that come to the store is why Haws continues to collect.

Poteete enjoys telling the stories and says he collects all the players he played with and against.

“I have my main sets which are Stanford, USC, Cal and UCLA. I also have UNLV, UNR, Arizona State and BYU. Those are the ones I have the most of. I organize boxes by team and player,” he said.

He is known simply at the store as “Stanford” because of his collection.

Poteete says he has gained some notoriety over the years because all the collectors know him.

“There are now just two main card shows during the year,” he said. “I can go to them and the collectors could have up to 300 cards ready just for me because they know what I collect.”

Haws, over the years, has seen a downturn in the hobby.

“It’s interesting to see where the hobby is going,” Haws said. “There have been a lot of stories coming out talking about the decline of the hobby. Every year we have the new hot rookies coming out and their cards are worth thousands of dollars. If there is a decline, I just don’t see it. There may be less collectors out there, but the collectors of today are more hard- core. They are out there spending thousands of dollars per month or per week.”

Poteete is not into it for the money. He collects for the enjoyment of collecting. He even gives a lot of cards away simply because he likes to.

“I make team sets and school sets like I gave to you,” he said. “I have given to over 60 people. Did I tell you that I even gave a set to Pete Carroll of USC and Jim Harbaugh when he was at Stanford? I have even given them to doctors and nurses who have helped me out.”

The enthusiastic collector also agrees with Haws that the hobby has seen some rough days.

“I have seen a decline in collectors because of the recession. In 1990 during the height of the boom there were 70 shops just in Las Vegas alone. There are like five now,” he said.

The most money he has made from cards comes from selling hot rookie cards, but that is not his thing. He just gets lucky now and then and is in the right place at the right time.

“One time a triple crown winner from the Padres came out and his rookie card was selling at the beginning of the day for $5 and then it went up to $17-$20 per card and I had 13 of his card and so I sold them all for $12 apiece and sold all of them in a day,” explained Poteete.

To him that was exciting, but he says it is rare for him because he collects obscure college cards that nobody buys nor wants.

At home, he has several closets and a rented storage container full of cards. How does he remember what he has? “Good question,” he replied. “I just know and it is all in my head.”

Haws said just because a collection is huge and old does not make it valuable.

“The book value of a card and the actual value all depends if you have a buyer. If you have no buyer, the value of the card is worthless regardless of the book value,” Haws said.

One set of cards he is particularly proud of is the Bob Boone family collection. He played with all-star Bob Boone at Stanford. Boone then played for the Phillies and stayed in the majors from 1972 to 1990. Poteete has a Boone collection of 5,000 cards.

Poteete says he spends maybe $1,000 a year. Of course it could be higher, but if he says so his wife will kill him.