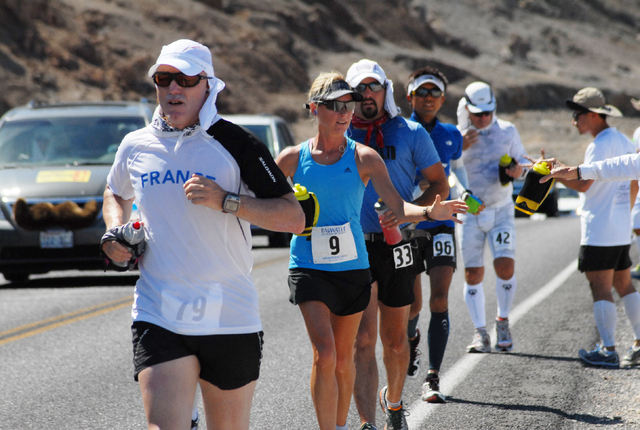 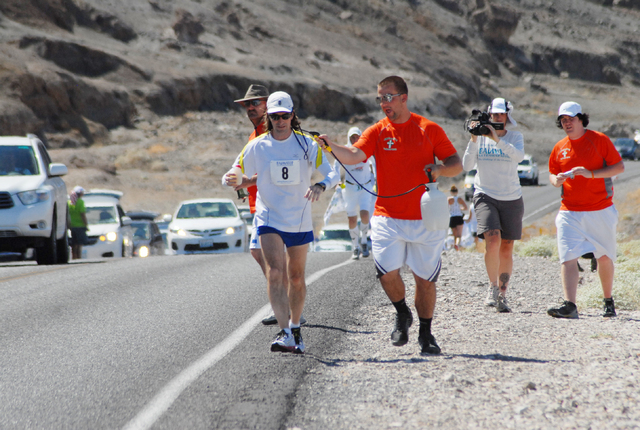 With just a couple of weeks to the traditional date of the Death Valley Badwater Ultramarathon on July 21, Death Valley National Park is close to reaching the end of their safety review, but for the Badwater race, not close enough.

Death Valley National Park has had a moratorium of all sporting events since October 2013. This moratorium made it necessary for the organizer of the Badwater race, AdventureCORP, to change the entire race course.

Death Valley came out with an official word on the status of the park-wide safety review. Cheryl Chipman, the Death Valley National Park spokesman said the report is still under review at the regional office.

Admittedly the National Park Service is behind their own time line, which is posted on their website.

According to their own website the entire process was supposed to be done.

“We have accepted some applications from post October 1. We anticipate on granting those permits with a new set of conditions. This is all I can say until the final review. I am not sure what the time frame is on that because this has reached such a high level of scrutiny. As you can imagine within our government circles there are a lot of levels of review that will be needed to be completed before being released to the public,” Chipman said.

She said the park thought the review process would have been over by now, but that just did not happen. In fact, she said all the scrutiny has added to the process.

“What has happened because of Mr. Kostman, his letter writing campaign and his advocacy for other levels of review has lengthened the process by quite a bit. I think this has backfired on him,” she said. “We are not dragging our feet, we are doing this as quickly as possible. This is not going after him (Kostman) personally. We are looking at all the events that happened, not just Badwater. We have ten events each year and we also get more requests each year. This is an opportunity to look at all events comprehensively, set some conditions that will be applicable to all, and this includes increased signage on Death Valley roads.”

Past articles on the topic have centered entirely on just the safety of the sporting events, but the PVT in a story by Mark Waite reported that Chuck Caha, a Death Valley road worker, died on Sept. 19, 2013. The PVT asked Chipman if this death also played a role in the decision for the moratorium. Chipman replied, “Both of the events that you mentioned are part of the consideration for the moratorium. One because the death of our employee highlighted that even at 106 degrees, Death Valley can be a dangerous place and because Badwater happens often at 120 degrees, that is definitely part of our consideration.”

Some of the safety considerations she said revolve around traffic control, times of the day, and time of year.

“There are a lot of factors going into our review and some that are not applicable to the Badwater race. Basically, we are setting new conditions for all permit holders,” Chipman explained.

The PVT asked Death Valley if the National Park had it in for Chris Kostman because his organization has been so vocal about the moratorium. Chipman answered, “Absolutely not. We knew that permit holders would probably have some issues with the moratorium. There are other large events that have applied for permits this fall and they will be under the same conditions as any other person applying for a permit.”

Chipman wanted the issue to remain with safety. It is apparent that Death Valley does not want attention to be focused just on Chris Kostman and his event.

“For this issue, our priority is the safety for the park visitor, for the people that are bystanders for these events and exposed to unsafe conditions. That is our responsibility, to the employees that work these events too. Our staff is out there on the roads while these events are taking place. This puts a strain on our resources and thirdly the event participants and their staff, their support crews that are on the road. So it is a threefold audience that we are looking at. We want to make sure that we are safe for park visitors first and park staff secondly,” Chipman remarked.

In the past, Kostman has come out and said Death Valley was attacking his safety record, which is not the case according to Chipman.

“The athletes that come to these events are trained and we know they are fit, but the other people that get out of their cars and watch the events. Those that are trying to drive on our park roads, trying to pull around the event participants on to oncoming traffic, cross double yellow lines and go through blind corners, that is our responsibility to make those roads safe for all,” Chipman explained.

Chipman said as soon as the review is done the park will come out to the public with results and to the race permit holders.

Kostman was asked for some comments on the safety review time line, and whether or not he thought his chances of returning to Death Valley had been diminished by his past comments about Superintendent Kathy Billings. He replied, “I’m not going to try to guess the motivations or inner brain workings of the Death Valley National Park staff. The complete lack of logic or just cause for their actions is inexplicable. I will point out that the National Park staff are not following the timetable outlined on their own website in regards to what they term a “safety review.” I will also state that they have never reached out to AdventureCORPS, who are undoubtedly the biggest “stakeholder” to be impacted by their actions, although their website promises they were to reach out to us in March, May, and June of this year, which they never did.

“Our organization, for well over a decade, has brought more overnight guests, and more media attention, to Death Valley National Park than any other organization on an annual basis. We have also brought considerable revenues to the Death Valley Natural History Association, the park’s official non-profit partner, not to mention over a million dollars in annual revenues to the hotels, restaurants, and other businesses. Not so in 2014, when we are not bringing anyone to the park due to the National Park Service actions.”