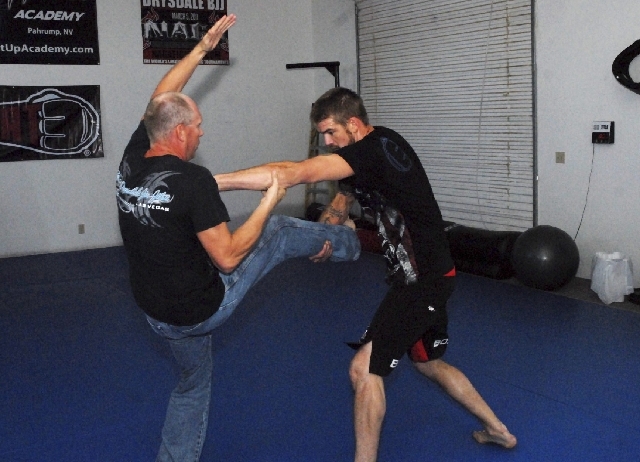 Schneider is 6 feet 5 inches tall and hopes to capture his first amateur MMA title. Schneider is better known as “Brandon the Brute.”

Schneider is on a fight card of 16 and his title fight will be the 14th spot of the evening against 205-pound Cedric Terrel, “Big Dawg” at 2-0.

Tuff-N-Uff broke the news two weeks ago to the Schneider camp in Pahrump, which is composed of Coaches Robert Wilson and Brian Thelaner. Both have been with Schneider for the last three years. Wilson and Thelaner both teach out of Robert Drysdale’s Mix It Up Academy in Pahrump, which teaches Brazilian Jiu-Jitsu and Muay Thai.

Schneider is excited about the fight and the opportunity. He has been training hard with UFC fighters for weeks.

“You got to train with the best to be the best,” he said. “I have taken a beating. I am not using any headgear. When you use headgear, you get used to it and you don’t use it in a real fight. You need to know you can take a real punch. You risk injury, but you’re not going 100 percent in training on the head. A couple of times I was supposed to cover up and I got clipped.”

Schneider said he is training with UFC fighters Robert Drysdale, James McSweeney and Brad Torres to name a few. He travels to Las Vegas everyday to train with them.

Wilson is extremely excited about the opportunity to prove Schneider is ready for the big time.

“The Tuff-N-Uff champion vacated his title and went pro. So we had a feeling this was coming. The training is still the same. Every fight he trains like it is a title fight. I push him the same. So he is ready and successful. I never want his training to be in question,” he said.

When asked about why Schneider trains without the headgear, Wilson responded, “The reason we don’t use headgear is because he does not wear headgear in the ring. The way I look at it is we are not going 100 percent and there is a vision issue.

“When I train guys for amateur Muay-Thai fights they use headgear because the athletic commission wants them to use it. We try to do everything in sparring as close to how the fight is going to be. If it is a fight that uses headgear, then we train with headgear in practice. If it is a fight without headgear, then in practice — no headgear. The sparring we do is usually 25 to 30 percent.”

Wilson said he is training Schneider like he always has trained him. The team knows Terrel is a stand-up Muay-Thai fighter and Schneider favors taking his opponents to the ground. They watched some footage on Terrel but are not really concentrating on him.

“I don’t put a lot of emphasis on the opponent, just a little bit,” Wilson said. “The last fight we worked on a ton of wrestling. That was something I wanted to add to his arsenal so he had a good skill-set of wrestling. I want Brandon to be able to defend against takedowns better.

“Sure enough, this last fight Brandon took his opponent down and pounded him and got the submission. This guy is 2-0 and is good. Our game plan is to do what we do best, maybe counter- punch a little and then get the fight to the ground.”

“We are basically wanting the fight to go to the ground with Brandon’s Jiu-jitsu background. We want Brandon to learn a punch combination that will lead to a takedown.

“I am not too concerned with the stand-up. The guy does come from a halfway decent Muay Thai gym. The coach is pretty good there. Brandon does do a lot with pros, so he is getting good on the ground. That is the strength of his game. We will work the ground and pound game and try for the submission.”

As far as getting hurt before the fight even starts, the Schneider team is not too concerned with that.

“Getting hurt before the fight is always there. That is part of the game. He will have to step up to the level of the game. What we do with the cross- training is we tear them down and build them back up. The fight training is a 12-hour day. Training is more than a full-time job,” Thelaner said.

If Schneider wins, will he take it to the next level? Wilson would not comment on that because he said he would address that when the time comes.

Schneider did say this, “I could defend one more time to prove that I did earn it or go pro. It depends on the coaches and me and we are taking it one step at time.”

Schneider is related to former PVHS coach Andy Schneider, who retired in 2011 and moved to North Dakota. Andy too, is really excited for his son.

Andy said he has not had a chance to see any of Brandon’s latest fights because he lives in North Dakota and the plane fare is just too expensive.

“Every time he gets a fight I watch his videos,” he said. “Getting hit hard is part of the game, but deep down it does bother me. I mean I cringe. He is tough, though.”