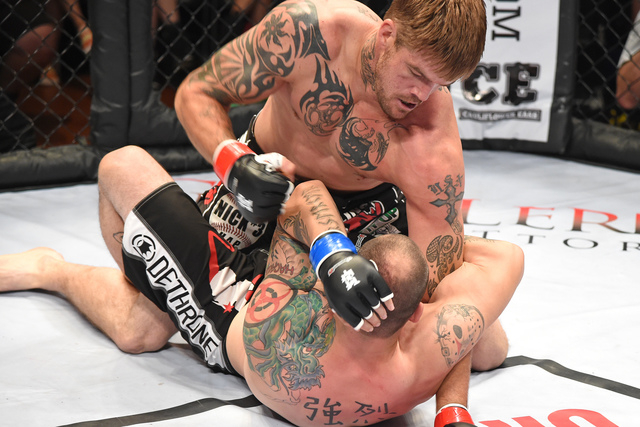 The Pahrump resident earned a split decision to take the amateur light heavyweight title from champion Mike Florio at a Tuff-N-Uff event at the Cannery Hotel and Casino in North Las Vegas.

Schneider (4-3) came out fighting like he did in his March 14 fight in Mesquite, where he won with an 11-second knockout. However, Florio (7-3) proved a much tougher and experienced opponent.

“The fight seemed to last forever, and when you defend against take downs, you use a lot of energy,” said Schneider of the match in the 205-pound weight class. “I felt exhausted, but I kept going and in round two I kept telling myself, ‘I worked so hard for this that I am not giving up.’”

Schneider’s coach, Robert Wilson, said the game plan was similar to the one they had in Mesquite.

“I wanted Brandon to be aggressive and always be moving forward,” Wilson said.

Schneider came out punching and scored with several head shots with one punch clearly hitting Florio in the temple. After the first round, Florio appeared dazed and he never seemed to recover.

In round two, Schneider kept the pressure on with more punches to the head. Schneider was also able to defend against a couple of take-down maneuvers and this seemed to dishearten Florio.

“He followed the game plan,” he said. “His opponent was a very tough fighter. What he lacked in technical skill he made up for it in willpower.”

Wilson said that he told Schneider after the second round that he had the fight won.

“I told him to keep standing,” he said. “I didn’t want Florio to take him to the ground because I thought Florio could do some damage and score points on the ground.”

Schneider did just that. In the third round, when Florio tried to take Schneider to the ground in numerous attempts, Schneider managed to somhow always reverse the move and managed to stay on top.

By the third round, both fighters were gassed, but Schneider managed to stay on his feet. The coach said what beat Florio was in the first round when he failed to take the fight to the ground.

“The take-down defense was great and then Brandon was so much stronger than him,” Wilson said. “He threw Florio around like a rag doll. As soon as I saw that, the percentage went way up that Brandon was going to win.”

Wilson said it’s very frustrating when you are a ground fighter and you can’t take down the opponent.

“You expend too much energy,” he said. “I thought unless Brandon does something stupid, Brandon should win this fight.”

Schneider was feeling on top of the world at the end of the fight. His entire family and many fight fans from Pahrump were there to see him win the title.

Schneider said that Florio never really hurt him during the fight.

“He got some punches in the first and second rounds, but nothing hurt me,” he said.

Schneider has changed many times as an amateur and Wilson said he still needs to learn more to be successful in the future.

Schneider started off his career as a grappler in 2013. He would throw a few punches and take his opponents to the ground. In his early career, he was not known for his punching ability and that worked then.

In Mesquite, he gave up the ground game and came out punching. Wilson called the stand-up fighting, “dirty boxing.” He continued the dirty boxing with the Florio fight. Wilson would like to work on Schneider’s footwork, including moving side-to-side, and working more angles.

“Schneider has some more work to do,” Wilson said. “These last two fights he has been fighting straight forward. I think he still is not well-rounded enough. He has room for improvement. Those days where you are just a ground fighter or just a stand-up fighter are long gone in MMA.”

According to Wilson, his fighter needs to progress further with his stand up and work more angles. He needs more side to side. He needs to keep his opponents at the end of the punch and where he takes less damage.

Schneider said he is going to take a small vacation before deciding what to do next, including possibly turning professional. Or he might do another amateur title fight when he gets back, but he needs to think.

“If he told me he wanted to turn pro, he would definitely have my blessing,” Wilson said. “I want the best for Brandon. I want him to succeed.”

Brandon’s father Andy Schneider, a former Pahrump Valley High coach in football, wrestling and track, was scoring the fight as a judge in training.

“Of course, I can’t score my son’s fight for real, but I was allowed to shadow the judges and I scored the first two rounds of his fight and I had it 1-1,” he said.

Schneider thought his dad was being biased.

“Of course I think that was ridiculous,” he said smiling. “I know my mom and dad support me and I could hear my mother’s screams during the fight.”