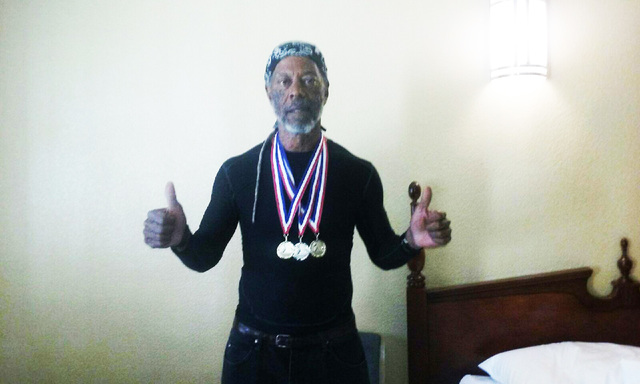 Marvin Caperton is a former University of California at Los Angeles football wide receiver and track star who played football under Dick Vermeil.

Caperton is now a senior athlete, who regularly competes in senior events across the country. He runs in the 50 meter, 100 meter and the 200-meter runs in the 60-64 age group.

He competed in the annual senior games in Las Vegas, which started on Sept. 16 and ended on Oct. 19. He won gold medals in two events, the 50 meter and the 100 meter. He received a silver in the 200 meter.

Caperton then traveled to the Huntsman World Senior Games in St. George, Utah, which ran from Oct. 3 to Oct. 15.

At these games Caperton got fourth place in the 100 meter and fourth in the 200 meter.

This year he said he trained differently.

“I worked on strength and power,” Caperton said. “I was stronger but last out of the blocks and so I was behind in every race.”

He said he will change that for the nationals in Birmingham, Alabama June 2 to June 15, 2017.

“I think I could have had first or second at the games in Utah if I had better starts,” he said. “It was my fault that I didn’t practice.”

Since he left college he has had to change the way he does start out of the blocks.

“Now they teach you to throw your hands up and drive with your arms and feet nowadays,” Caperton said. “That wasn’t taught back then when I was running.”

He said he will do some other things to help him with his starts.

“I was told to start running hills,” he said. “I haven’t done that in a long time.”

Note: If you are a senior athlete, we want your story.