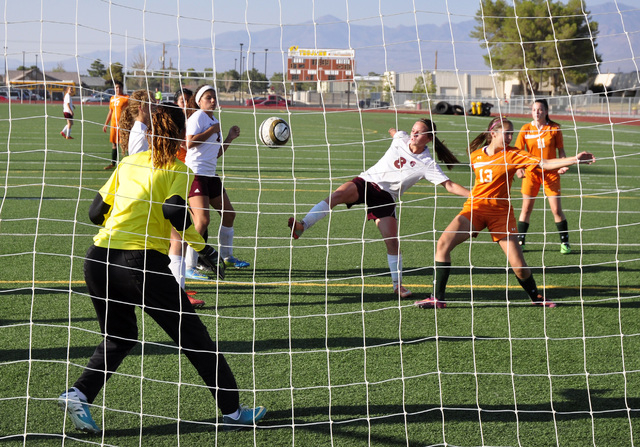 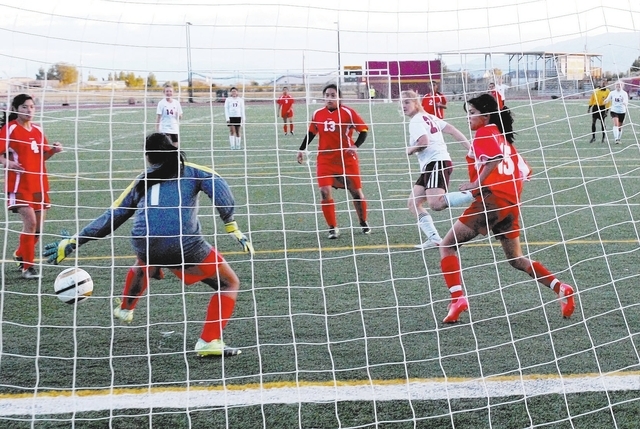 The only team Pahrump has not beaten up this year is Faith Lutheran. Pahrump played Tech at the beginning of the year and beat them badly 8-0. Pahrump played Faith and that contest ended in a 0-0 tie.

The Trojans will attempt tomorrow to settle the score at Faith Lutheran at 3 p.m. to see who is king of the hill.

Trojans Coach Pam Larmouth feels her team was not up to full strength the first time around. Her team had two injured players who are both healthy now.

Faith has one loss to Cheyenne this year, while the Trojans are undefeated overall and in league play.

The Western Warriors was the latest Trojans victim giving up 6 points in the first half and 5 in the second half.

The women played their passing/possession game and denied Western the ball. The Warriors never came close to scoring and the ball really was never in the Trojans red zone the entire game. It was so bad, the Trojans brought their goalkeeper, Kiaya Nauck, up to the front and let Winter Young get some time in as goalkeeper. Nauck scored one goal.

Larmouth took advantage of the game situation and let all her seniors play up top most of the game.

“Our possession game went great. Today we were trying to get all the seniors a goal. We let the seniors play up top that normally don’t. We dominated possession today and they did the right things.” Larmouth said.

The squad loses eight seniors this year: Brittany Klenczar, Sydney Sladek, Kristen Young, Kiaya Nauck, Lexi Smith, Rosa Ortega, Jennifer McCaw and Courtney Lindsay. All of them were honored with flowers at the beginning of the game.

One of the seniors who got to play up front was Lexi Smith who normally plays defender. Smith took advantage of the situation and was a dominating force on offense, despite not scoring. At the end of the first half, Brittany Klenczar ran into the goalkeeper while Lexi was scoring a goal. A penalty followed and the goal was taken off the books.

“Today’s game was like an intense game of possession.” Smith said. “This means basically when we play possession we try to better ourselves. It really is intense for us because we just try to keep the ball for our team and I think we did a good job of it today. It was a little frustrating for the seniors that did not score.”

The game ended and the seniors after the game were pretty emotional.

Sladek said she thought about the game during the day at school.

“It’s definitely an emotional day. It’s my last home game of my life in high school here, so it’s one of the saddest things ever. The season went too fast, I remember saying, ‘Wow, we have all these games. It will take forever to get through all of them,’ and now we have just one more conference game,” Sladek said.

The Trojans play Faith for the League title and regardless of who wins will probably face them again in the regional tournament, which will start Nov. 4 and Nov. 5, and conclude on the 6th. The top four teams from the Sunrise and the Sunset Leagues will first face off at Faith Lutheran High School on Nov. 4.

The final four teams will play at Heritage Park in Henderson starting on Nov. 6 and concluding with the championship game on Nov. 9 at 10 a.m.

From there the top two teams will represent the South and travel up North to participate in the state playoffs.

Look for the top two teams to be Pahrump Valley and Faith Lutheran. Neither team was really challenged by any team on the Sunrise side. Both Faith Lutheran and Pahrump defeated Tech who is the number one team from the Sunrise League.

The state title could very well be a repeat of last year’s title match between Faith and Pahrump.