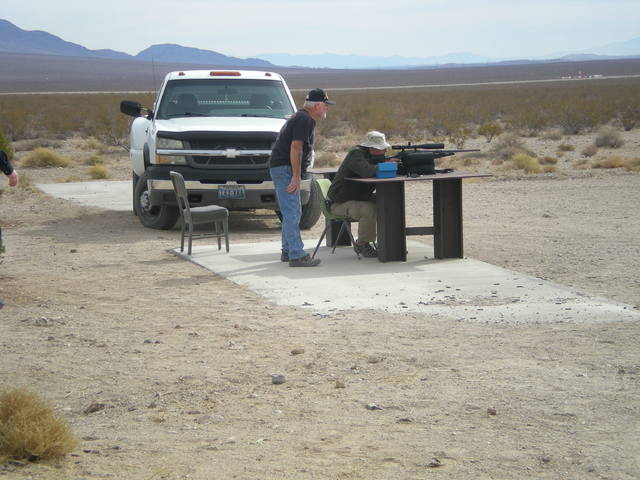 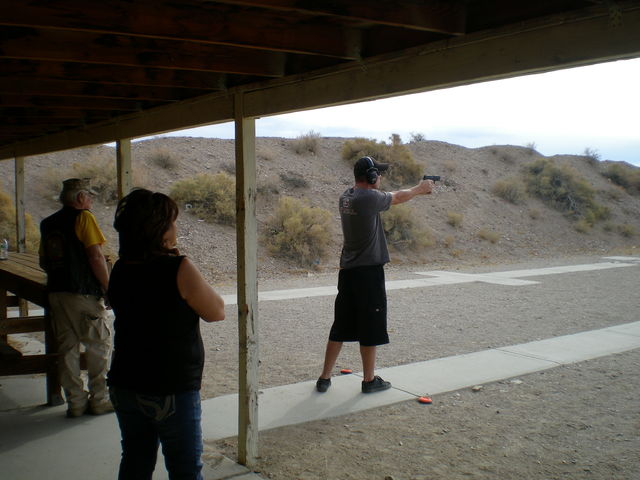 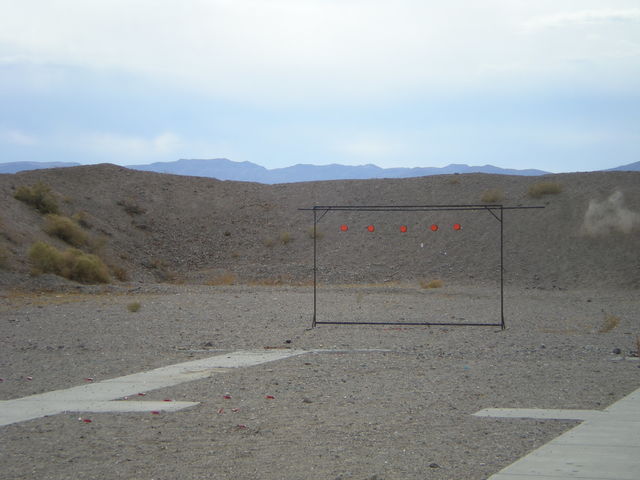 A view of one of the toughest shots at the shoot was the pistol shoot at 30 yards. Vern Hee / Pahrump Valley Times

BEATTY — The show must go on as they say in show business. The Beatty VFW Turkey Shoot went down as scheduled despite the town mourning the loss of Robert Revert, a former county commissioner and town resident for more than half a century.

“Yeah, we had fewer people than usual, this thing just happened to fall on the wrong day,” event organizer Karl Olson said. “It was so unfortunate that he passed and I know for a fact that it stopped many shooters from coming out because they felt wrong shooting on his day. Regardless, it was still a good day for shooting.”

According to Olson, the shoot benefited the community fund.

“This is a fund that helps kids out with scholarships or just people that may need bus fare or something to eat,” Olson said.

Ironically, the event is one that Robert Revert himself enjoyed doing each year.

Olson said the event gave away 30 turkeys to winners that paid $2 a shot to hit clay pigeons with a pistol at 30 yards or by rifle at 75 yards.

“That is not an easy shot to make,” Frank Jarvis, an observer of the shoot said. “I think they moved that back. It looks further away but I will tell you this, the best caliber to use for that pistol range is a .22 target pistol and I suggest you practice a lot before coming out here. I think you need to be about near perfect when you shoot at that range.”

Jarvis said he enjoyed doing this shoot when he was a lieutenant for the Nye County Sheriff’s Office but he said he wouldn’t do it unless he had a lot of practice before the shoot.

“You don’t know the flack I would get if I had a bad shoot,” Jarvis said. “They expected me to be a perfect shot because I was a sheriff’s deputy.”

Since his retirement, Jarvis said he hadn’t practiced in a while. Hence the reason he was just an observer during this shoot.

Then there was the grand shooting prize that Olson ended up winning. In that rifle shoot, shooters paid $25 for three shots at three different ranges, at the 200, 300 and 500 yards. There he had three shots at each distance.

The individual high score takes the prize money. This is limited to five, four and three-person teams. Olson just had the best shot.

“Of course they blamed me for practicing too much for the competition,” Olson said.