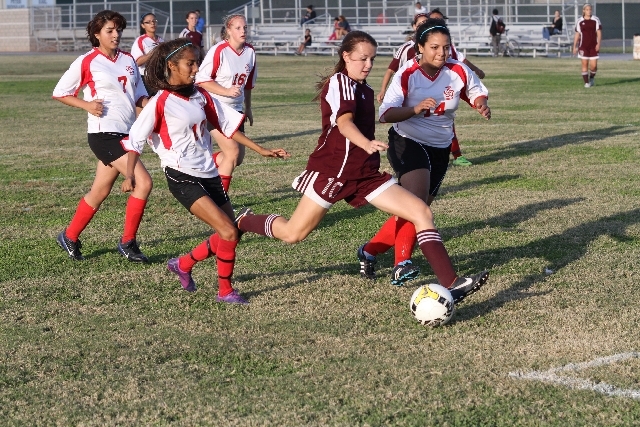 The Trojans have finally earned some respect as a championship team. The girls soccer team won back-to-back state championships for the past two years.

According to Head Trojans Coach Pam Larmouth, the last couple of years have been tough regardless of being state champions. She said it has been hard trying to put together a good solid schedule.

She said a good schedule is important to maintain the edge needed to win and be competitive.

Even after winning the state championship the first year, teams were not lining up to play them. Larmouth said it was like pulling teeth just trying to get Bishop Gorman to play them last year.

All that has changed this year.

“We did not pursue anyone to get the games. Everyone came to us. This was a real change,” said the coach.

The Trojans August/September schedule reads like a who’s who in girls soccer of all the top teams in Nevada.

Larmouth said the team will be scrimmaging two top teams in the beginning of the season, Arbor View from Las Vegas and Bishop Manogue from Reno.

Arbor View was last year’s Division I Nevada State Champion and Bishop Manogue has been one of the top teams from the North for a while.

Trojans Coach Joe Sladek has said all along you only get better by playing good teams.

The girls beat Bishop in the Howell Memorial two years ago.

“Bishop Manogue came to me saying they want to play a few Division 1 teams. So they will be coming to us. It will be played in Pahrump, but the time is not set — just the date, Aug. 24,” the head coach said.

Other teams the Trojans will be facing are Shadow Ridge, Green Valley, and Bishop Gorman.

This action-packed schedule should get the Trojans primed and ready to face Faith Lutheran and Division 1-A league play.