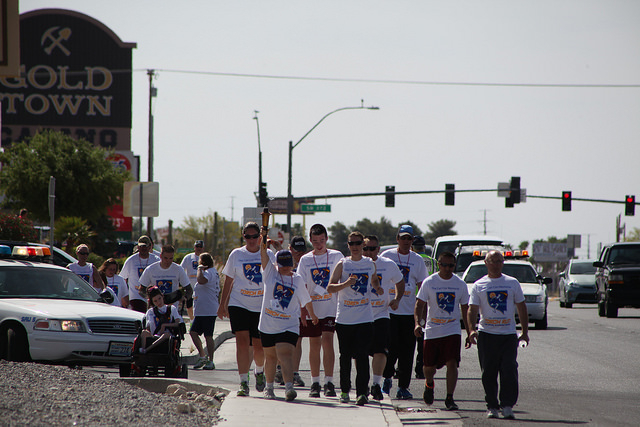 The Special Olympics Law Enforcement Torch Run will be on May 16 at 8 a.m. and is a fundraiser for Special Olympics Nevada. The torch is carried from Hoover Dam and runs up to Reno. Last year was the first time the run came to Pahrump.

Through the run Jim Soltz, Area Director for Special Olympics, hopes to raise nearly $2,500. Last year the group raised $1,300. Funds raised are used to send the athletes to the Special Olympics Summer Games in Reno.

“This year we should do well because I have been working on this all year and last year I didn’t have much time to organize the run,” Soltz said.

This year the event will be run by nearly 30 Special Olympic athletes where last year only the track team ran.

Soltz said although it is called the torch run, it’s really about being part of a team and working together. In the run, everyone is allowed to carry the symbol of the games, the torch.

In Pahrump, the run will start at the Calvada Eye and move 3.3 miles to the Sheriff’s station. The athletes will each run three-tenths of a mile.

“The new sheriff is on board to provide the deputy athlete runners,” he said.

Once the torch comes to Pahrump, 15 Nye County deputies will run with the athletes.

Soltz said in addition to the deputies there will be a lot of other different community groups showing their support for Special Olympics.

“There will be water at all the exchange stations thanks to different groups,” Soltz said.

Donations are still being accepted by Special Olympics and t-shirts will be sold at the event on Saturday for $15. This year’s t-shirt sports Elvis and says, “Viva Pahrump.” For more information call Jim Soltz at 775-537-2175 or go Online at SONV.org.