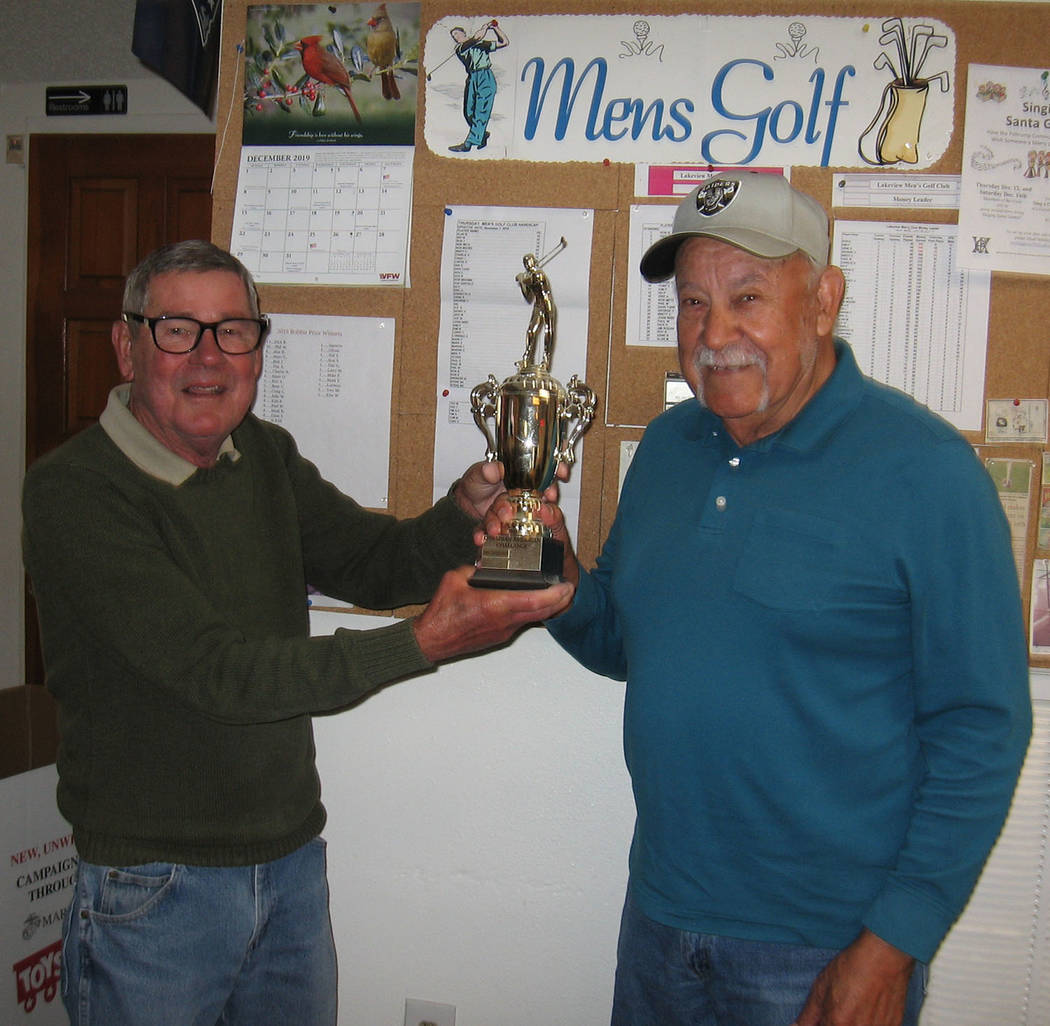 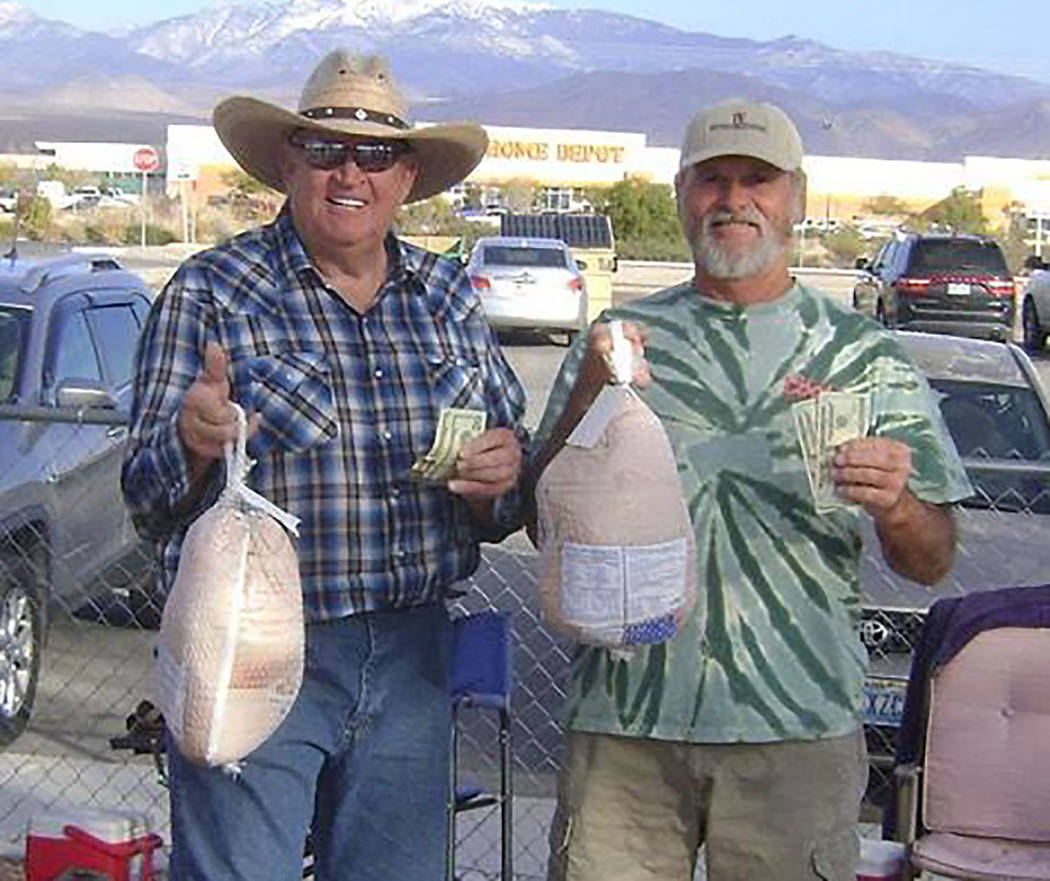 Special to the Pahrump Valley Times Dennis Andersen, left, and Mike Nicosia display the cash and turkeys they won for taking first place in the horseshoes tournament during the Pahrump Social Powwow on Nov. 23 at Petrack Park.

Thirty-two players participated in the tournament, which was held over two weekends. Alvarado and Simmers were tied at 12-under 106 at the conclusion of the second round.

“I started playing golf 24 years ago when my wife and I retired,” Alvarado said at the awards presentation. “We play at Lakeview three times a week and enjoy it very much.”

Alvarado was presented with the championship trophy, which he will keep for a year, and a cash prize for winning the tournament.

Dennis Andersen and Mike Nicosia went 5-2, compiling 147 points to take first place in a horseshoes tournament held in conjunction with the Pahrump Social Powwow on Nov. 23 at Petrack Park.

Instead of a cash prize and a trophy, the top three finishing teams received cash and a turkey, which tournament organizer Lathan Dilger considered appropriate for an event held the weekend before Thanksgiving.

“I’d like to thank Terry at Smith’s for the turkeys,” Dilger said.

Dan Dunn and Rai Adams went 5-2 with 142 points to finish second, while Dave Barefield and Randy Salzwimmer were 5-2 with 137 points for third place.

Dilger said the next horseshoes tournament will be the Christmas Tree Open at 11 a.m. Dec. 14 at Petrack Park.

When Anthony Bachiller died unexpectedly a couple of months ago, leaving behind a wife, Jessica, and children, Alan Foshee immediately thought about doing something to help.

The result is a fundraising bowling event that will be held at 1 p.m. Sunday, Dec. 15, at the Pahrump Nugget Bowling Center.

“I used to play softball with them,” Foshee said. “When they got married, I dropped out of softball and was bowling Saturdays with Anthony. When I found out Anthony had passed away, my first thought was Jessica because I knew her first.”

Foshee said Jennifer Bachiller was in high school when she started playing softball, and that longstanding friendship moved him to take action. Because he had bowled for so long with Anthony Bachiller, a bowling fundraiser for the family made sense.

“It was just something I had in my heart to do for her and for the kids,” Foshee said. “I just thought it was something good to do since the family basically lost half of their income.”

The cost is $20 per person for three games, and with the Nugget only charging $1 per game, $17 of the entry fee will be donated. The format is three games with handicap, and for those without a 2019 book average, 100 percent of 200 pins will be used.

There will be a scratch 50/50 men’s and women’s side pot, with an entry fee of $20. Half of that will be donated and the other half will be awarded as prizes, with $2.50 per game for high games and $2.50 for high series. There also will be a raffle.

“The Nugget was gracious enough to help me find some deals on bowling balls to raffle off so nothing is coming out of the donations,” Foshee said.

The Pahrump Valley High School softball team is holding a raffle as a fundraiser, with prizes including a $100 gift certificate to Stockman’s Steakhouse.

“We’ve had a lot of support from local businesses offering goods and services toward our raffle, which has really touched my heart,” Lauver said.

Lauver has a lengthy wish list of items that simply cannot be purchased without outside support.

“A few of our goals dependent upon the outcome of this fundraiser are travel gear for our girls, one or two additional tournaments added to our schedule, rostering a freshman team for the 2020 season and specific equipment goals such as a new pitching machine that throws multiple pitches, which our program is in desperate need of, a pitching screen, nets and tees.”

Tickets are available from any softball player or coach, and the drawing will be held Dec. 16 via PVHS Softball Facebook Live. For more information, contact Lauver at clauver@nyeschools.org or 775-727-3183.