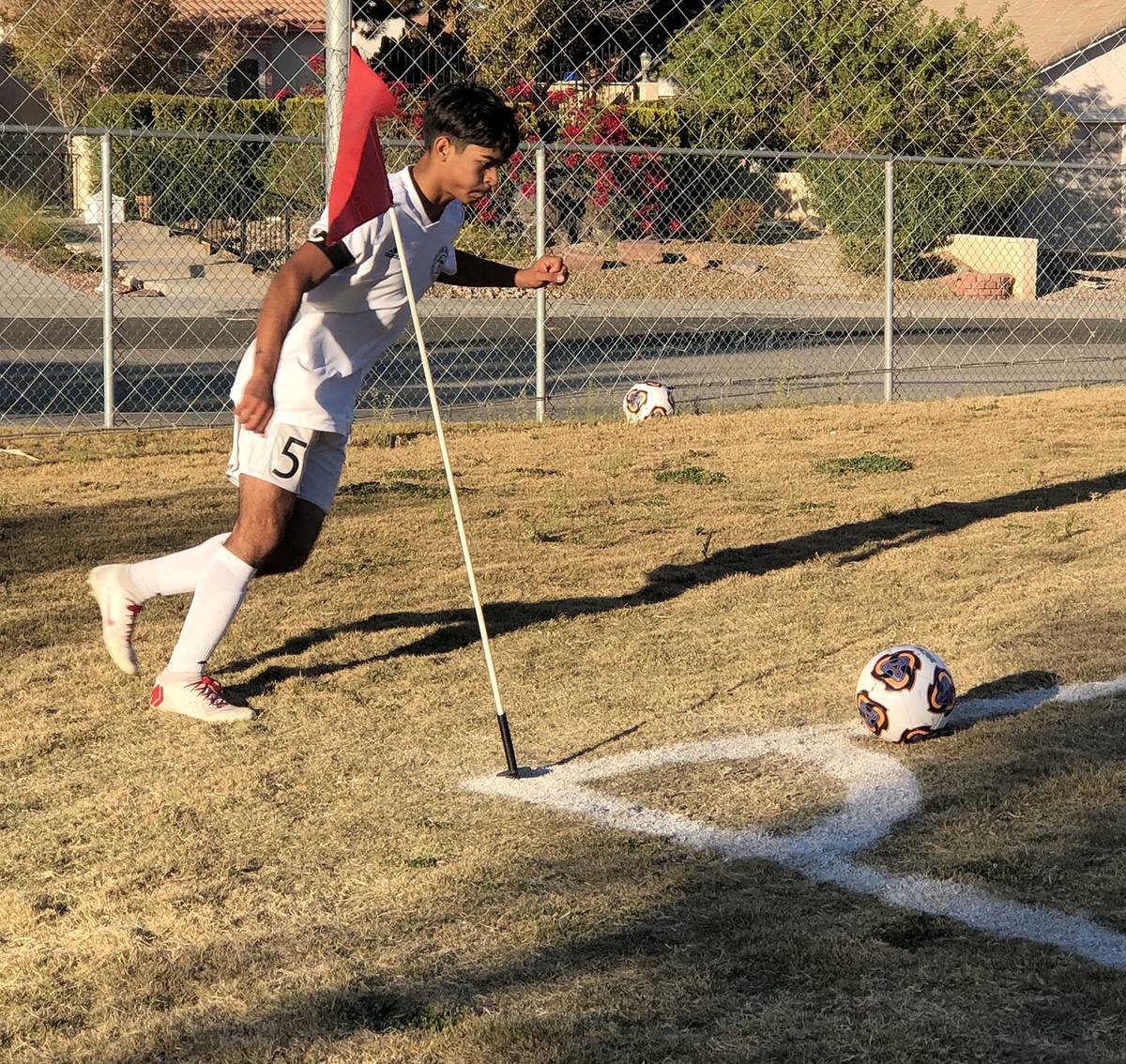 File photo Christopher Vega, shown taking a corner kick during a game last season against Del Sol, recorded a goal and an assist as the Pahrump Valley High School boys soccer team ended its season with a 5-1 win over Virgin Valley on Friday in Mesquite.

Junior Christopher Vega posted a goal and an assist for the Trojans, who finished 3-6.

The five goals is a season high for Pahrump Valley, which scored nine goals in nine games and was shut out five times while playing a challenging schedule that included two games apiece against Faith Lutheran and Equipo Academy and a game against Bishop Gorman. The Trojans went 0-3 against teams that would have been 3A Mountain League opponents and 2-3 against Class 3A South teams overall.

History was almost made Friday night at Trojan Field, but in the end Virgin Valley headed home with another victory over Pahrump Valley.

Ethan “Peanut” Workman’s touchdown run in overtime was the only scoring in the Bulldogs’ 6-0 win over the Trojans, the 26th consecutive victory for Virgin Valley in a series that dates to 1973. And while the Trojans fell to 7-45 all-time against the Bulldogs, even the loss stands out looking back at the rivalry.

The six points scored by Virgin Valley is their fewest against Pahrump Valley since the Trojans shut out the Bulldogs 12-0 in 1993, their last victory in the series. The game was the first overtime contest in the series since 2005, when the Bulldogs posted a 39-33 win. And aside from a 26-24 Virgin Valley win in 2018, the two OT games mark the smallest margins of victory during the Bulldogs’ winning streak against the Trojans.

Pahrump Valley finishes the truncated season 1-3, while Virgin Valley went 2-2, losing to Moapa Valley (18-14) and Faith Lutheran (49-0). Clark County schools not playing fall sports undoubtedly hurt both teams’ records. Against 3A South teams that did not play this season, the Trojans are 9-3 against Western with nine consecutive wins, 2-0 against Valley, 1-0 against Rancho and 1-0 against Eldorado. Only Boulder City (26-7) owns a winning all-time mark against Pahrump Valley.

Assuming the fall season beginning in August marks a return to normal, Pahrump Valley will be in the new 3A Mountain League with Boulder City, SLAM Nevada, Eldorado and newcomer Pinecrest Academy Cadence.

Tristen Brown went 2 for 3 with 3 RBIs and 2 runs to help the Dodgers to an 11-8 win over the Red Sox on Thursday night in Juniors, the first loss of the season for the Red Sox after four wins.

Over in the Majors, Noah A. blasted 2 home runs and finished with 6 RBIs as the Dodgers (3-3) battered the Braves 18-2 on Saturday, their second win over the Braves in three days.

Sammy M. and Chris each drove in 3 runs and scored 3 runs for the Dodgers, who pounded out 17 hits. Levi D., Daniel S. and Wyatt W. each scored twice.

In Thursday’s game, Noah A. went 3 for 3 with a double, a triple and 5 RBIs as the Dodgers rolled, 16-5. Levi D. tripled, scored 3 runs and drove in 4 runs, while Jose A. doubled and tripled and Derek H. homered in the win.

In the Minors, the Braves and Dodgers each had 4 hits Saturday, but the Braves took advantage of 15 walks to post a 15-4 win.

Everett, Levi, Bentley, Jon and Damon each scored twice for the Braves (4-1-2),while Austin hit 2 singles and scored a run. Evelyn W. walked twice and drove in a run for the Dodgers (2-5), while Aden R., Ethan C., Grant D. and Luis G. scored runs.

Saturday’s other Minors game featured the Giants drawing 17 walks yet still losing to the Rockies, who drew 11 walks in a 14-10 win. Juan R. had 2 of the Rockies’ 6 hits, including a triple. Five players scored 2 runs apiece for the Rockies (5-2).