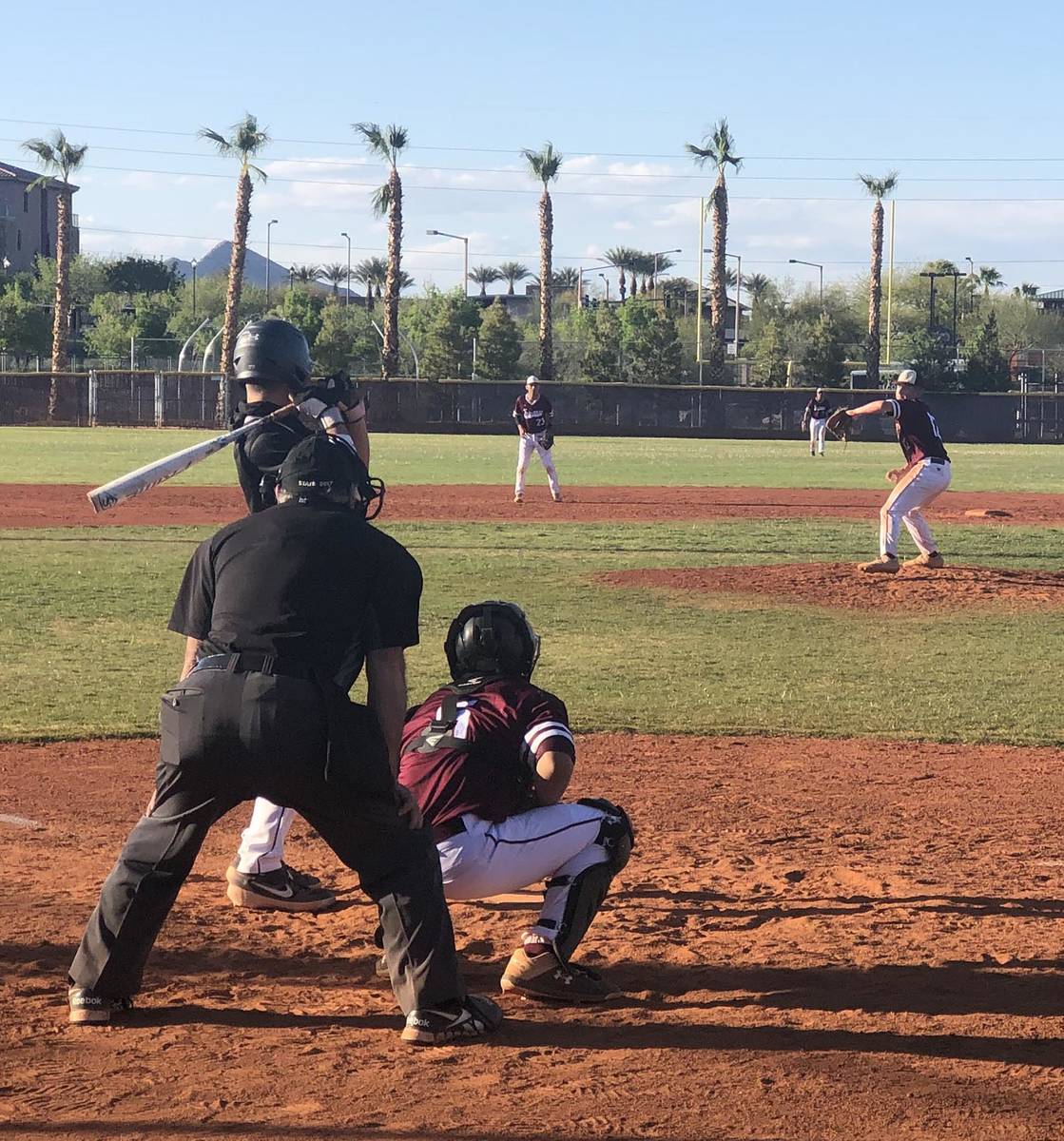 Tom Rysinski/Pahrump Valley Times Pahrump Valley's Kyle McDaniel pitches to a Faith Lutheran batter during Thursday's game in Las Vegas. McDaniel went 2 for 2 and scored the only run during the Trojans' 13-1 loss in the second game of the doubleheader. 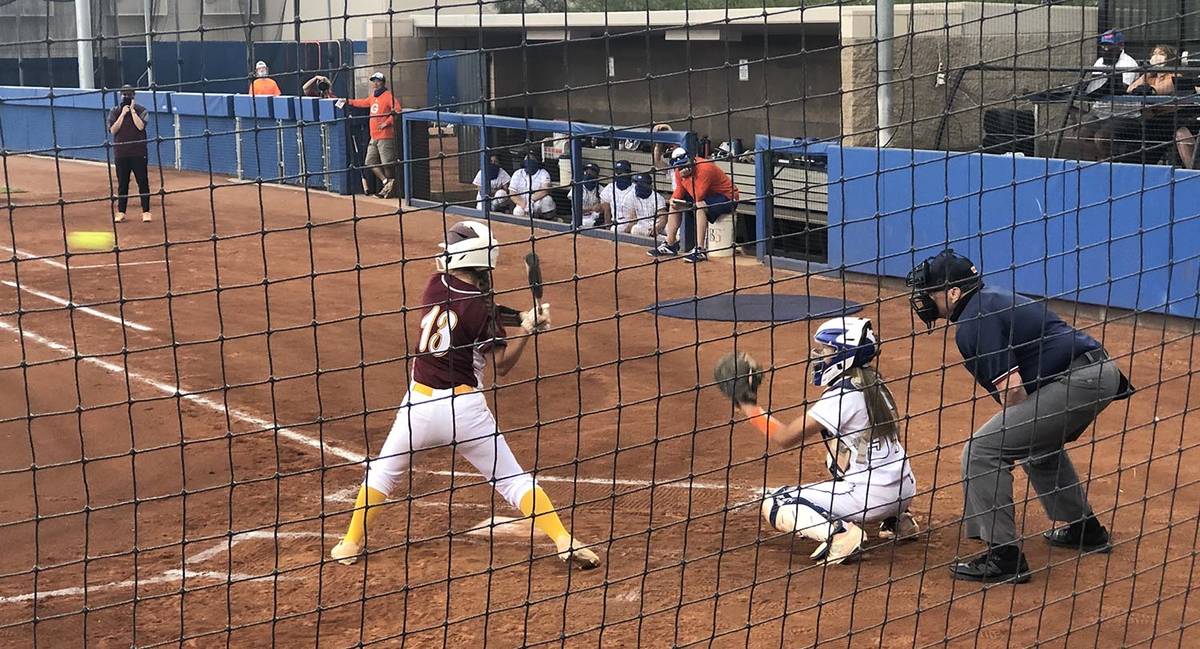 Tom Rysinski/Pahrump Valley Times Pahrump Valley's Leila Denton keeps her eye on the ball during Friday's softball game at Bishop Gorman. Sara Colucci is coaching first base for the Trojans.

Sophomores Nathan Schaaf and Daniel Edghill recorded victories as the Pahrump Valley High School track and field team opened its season at a meet Friday at Basic Academy in Henderson.

Schaaf ran the 1,600 meters in 5 minutes, 23.2 seconds to finish 6 seconds ahead of Basic’s Trent Day. The time was also 12 seconds better than his best time from last season’s brief schedule.

On the girls side, freshman Paris Coleman won the 800 in 2:59.20, beating out Basic sophomore Kennedy Ports (3:02.60). Coleman also won the shot put with a heave of 25-11, besting junior Allie Miner of Basic by 5 inches. All 12 competitors in the event represented Pahrump Valley or Basic.

The Trojans are also shorthanded, at least by their standards.

“We have around 55 athletes out for track this season,” Schmidt said. “Normally, we field 120 to 130 athletes combined between girls and boys teams.”

Other Pahrump Valley winners were Bill in the triple jump (38-8.5) and senior Bodhi Ledford in the boys shot put (32-2).

“The athletes are excited about being able to get out and compete again,” Schmidt said. “We hope that feeling will spread to bring more kids out to be active and not allow this virus to suppress them. They need to be active, and exercise promotes health.”

The Trojans opened the season by dropping both games of a doubleheader against Faith Lutheran on Thursday in Las Vegas, 4-0 in the opener and 13-1 in the nightcap.

The Trojans were held to five singles in the first game, with Jalen Denton getting two of them. Jake Riding and Kyle McDaniel teamed on a six-hitter, but the Crusaders used single runs in the third and sixth innings and scored twice in the fifth to squeeze by the Trojans.

In the second game, the Crusaders scored 7 unearned runs during a 9-run first inning and cruised home.

Riding drove in McDaniel in the top of the first, and it was all downhill from there for the Trojans, as the Crusaders scored 16 hits, 4 walks and 4 Pahrump Valley errors to build their lead.

McDaniel had 2 of the Trojans’ 4 hits.

The Trojans are off to an 0-3 start, falling 15-5 to Bishop Gorman on Friday after dropping both games of a doubleheader Thursday at Faith Lutheran by identical 11-4 scores.

The Trojans took a 5-0 lead early against the Gaels, as Ciara Stragand’s double highlighted a 3-run first and the Trojans used a hit batter, an error and 2 groundouts for a 2-run second.

From then on, it was all Gaels. The Trojans managed 2 hits the rest of the way while the Gaels finished with 18.

The Crusaders scored 5 runs in the bottom of the first inning Thursday and coasted past the Trojans in the opening game of the season. Ava Charles went 2 for 3 and scored a run for Pahrump Valley, while Ally Rily and Stragand drove in runs.

Crusaders starter Ava Walker struck out 11 and allowed 2 earned runs for the win.

In the nightcap, the Trojans took leads of 1-0 and 3-2 early before being overwhelmed by the Crusaders’ 16-hit attack.

Deeanna Egan went 3 for 3 with a walk, driving in 3 runs for the Trojans, while Ally Rily’s double was the only other extra-base hit for Pahrump Valley. Kalea Whitney drove in the other run for the Trojans and scored twice.

Kelson S. went 2 for 3 with 2 RBIs, 2 runs and 2 stolen bases as the Royals snapped a 2-game skid Saturday by posting an 11-4 win over the Braves in the Majors division.

Mark R. struck out six batters in 2 innings for the Royals (7-2), who held the Braves to one hit.

In the Minors, Steven B. singled, drove in 2 runs and stole 2 bases as the Dodgers edged the Giants 12-11.

Levi had the only hit for the Braves (4-1-2), while Levi, Nick, Austin and Zayne each scored a run.