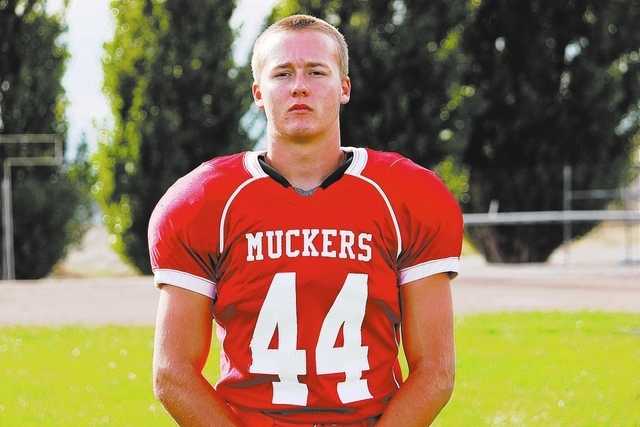 The Tonopah Muckers football team had too many problems with Indian Springs and lost 35-20. The Muckers have one game remaining and are 4-1 in league play.

Tonopah had many opportunities to score last Thursday, but after the first half just could not regroup.

The Muckers play division leader Pahranagat Valley Panthers at home on Friday at 7 p.m. The Muckers have a chance of smashing a 65-game Panthers winning streak. If Tonopah loses this week to the Pahranagat Valley Panthers and Indian Springs and Spring Mountain win there just might be a tie for second place and the Nevada Interscholastic Activities Association will have to step in with their complex formula to figure out who gets what seed in the playoffs.

Muckers Coach Duffy Otteson believes his team lost momentum after his defensive captain, Jeb Ayers went down with an injury during the Indian Springs game.

“We scored 14 points in the first quarter right away, then Jeb Ayers got hurt. He was a big loss as he is our starting running back and middle linebacker and our captain on defense. When we lost him our defense lost its edge. Jeb was able to adjust our defense and put the team in the right position to beat what they were doing. Jeb came with me to watch Indian Springs play Beatty last week and he was our quarterback on defense, basically,” he said.

Ayers went down in the first quarter and Matt Misener went down with cramps in the fourth quarter. Tonopah had to rely on freshman running back Vinny Bagaros and senior Jason Carman, who was moved from tight end to running back.

Otteson blames the team’s lack of scoring on himself. He said the team had the ball on the 3-yard line with 4 minutes and 30 seconds left in the game. The score was 20-28 Indian Springs and the Muckers could not get the TD.

“What it boils down to is I got out-coached. We also had the ball on the 50 and I decided to go for it on fourth and two. We didn’t get it. We had 10 penalties which directly comes back on me not being able to keep our kids’ heads in the game,” he said.

To beat the Panthers the coach believes his team has to stop them from making the big plays on the run and the pass.

“Indian Springs had four big plays that led to a victory over us, a punt return for a TD, two counter plays for a TD and a quarterback scramble for a TD. We can’t allow those kinds of plays. Alamo will score on us, but if we can eliminate the big plays and not have turnovers and penalties we can play with them,” he said.

Otteson says his team can put up the same numbers as the Panthers, but must learn to score like them. He said they know how to score.

“We have to play physical with Alamo and keep our heads in the game. If the kids believe we can play with them we will be fine and play good against Alamo, but the moment they think we can’t do it Alamo will pull away from us,” he said.

He knows to win, the Muckers have to be physical and just play smart football.

The big question for the Muckers is if they can pull out a big win without starting linebacker Jeb Ayers who sprained his ankle.