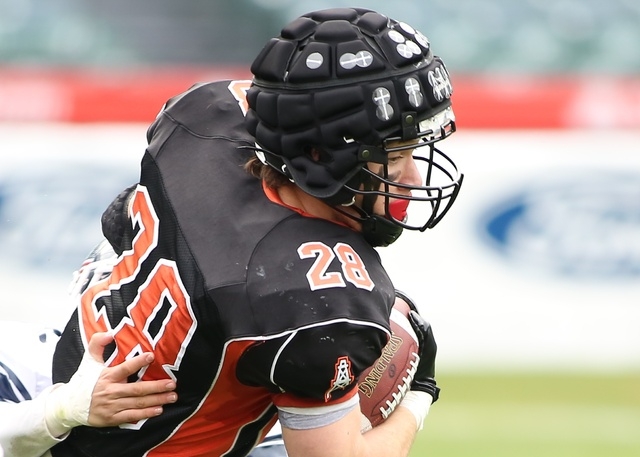 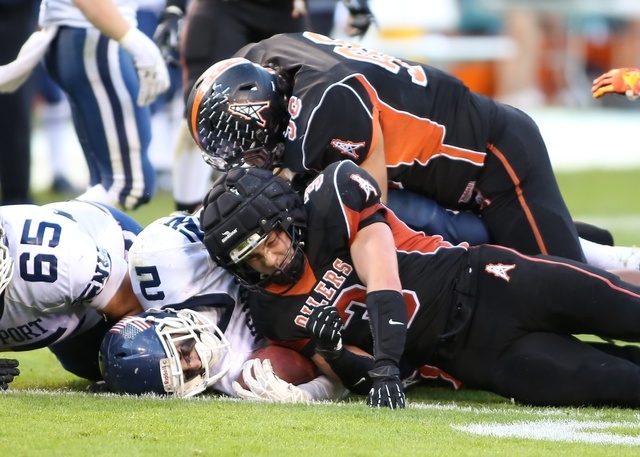 The topic of concussions has rocked the NFL all the way down to the Pop Warner level. It’s the hottest issue in football.

The cap is called the Guardian Cap and it is one-size-fits-all helmet cover. The Crusaders wear them at practice to reduce concussions.

Are these caps the solution? Ask any parent in Pahrump with a son that plays football at any level, would you invest in a cap that reduces impact by one-third in the head area and they will want to know more about it.

Craig Swan of Pahrump Valley Auto Plaza has a son that plays. “I would use something like this cap. Where can I get one?” he asked.

The answer is convoluted at all levels of play in football.

Besides Faith Lutheran there are three other schools in Nevada that use them: Reno High School, Bishop Manogue and the University of Nevada Reno.

The big question is why are there not more schools in the state using them when already the company that makes the Guardian Cap, The Hanson Group LLC, said there are 30,000 of the caps in use.

Matt Simonds, national sales coordinator for the Guardian Cap, said his company does a lot of research and development with materials.

“We are a materials engineering firm. We have a lot of expertise in energy and impact management. We design materials for aerospace, the military, playground equipment and recreational equipment,” he explained.

Simond’s group has been at battle with the leading helmet manufacturer, Riddell for some time.

The Hanson Group tried to get a similar helmet, under another company name, into the NFL. The intention was to make a better helmet and reduce head injuries.

The company worked strictly with impact reducing material. “We were called upon by a company that wanted to design a fully incorporated soft helmet for football. They wanted to design a helmet that looked like a regular football helmet used today. They wanted it to have a softer, more pliable exterior. We worked on it for two years around 2009. We took it to the NFL Concussion Symposium but it didn’t go anywhere,” Simonds said.

He said his company was left with a lot of research and through the work they concluded to have a soft-pliable material on the exterior of the helmet worked better.

“We set about to make something that was a bit different and was an add-on. We wanted players to be able to take them off and just wear them for games or practice. This was more feasible for teams who didn’t want to have to replace an entire inventory of helmets. This would be easier to implement,” he explained.

At the moment, the Nevada Interscholastic Activities Association goes by the National Federation of State High School Associations and they leave the purchasing of this type up to the schools and districts. What keeps most schools from buying the helmet add-on is Riddell and the fear of voiding the Riddell warranty on the helmet. “This has been our biggest battle and the hardest part of my job,” Simonds said.

Riddell was unavailable for comment, but Clark County did respond. They will not use it just yet. Ray Mathis, Region IV board member and past president of the NIAA Board of Control, said he thinks the product is a good one but the district has to make sure it’s doing the right thing for the safety of the kids.

“The national organization that certifies helmets (National Operating Committee on Standards for Athletic Equipment (NOCSAE)) came out and said any manufacturer has the right to void a warranty or re-certification of their product if there is an addition or adjustment to it. So Riddell has said there is not enough evidence to say this add-on is good or bad. There is not enough data to say this is safe. I will not get into a discussion with a product manufacturer about a product that everyone is trying to make money on and risk the safety of our kids. That’s the bottom line. Until someone says this is a safe product and adding to the helmet will increase the safety of the kid, we can’t move forward,” Mathis said.

He went on to add that it would be better if Riddell came out with their own helmet add-on and then districts would have more products to choose from.

Ryan Renne, vice president of the Huntington Beach Oilers Booster Club, said his school was all in on this helmet add-on. The Oilers won the CIF title in Calif. last year. This year 110 players came out for the varsity team. The team had four players that used them in the championship game last year.

“We used them on kids that had concussion problems in the past. One of our kids had numerous concussions between his freshman and sophomore year. He had three or four. At some point he was told he was not going to be able to play. He then sat out a year. He came back and they put the Guardian Cap on him. He went through his junior year with no problems. He was the first one to wear one during practice and during the game. This is an expensive product. We have 160 kids in our program. 100 are on the varsity program. This year we told the parents that this was an option and we bought 30 caps. It is really focused with kids that have had problems with concussions,” Renne said.

As far as the warranty, Renne said they follow to the tee what Guardian advised them to do. “Riddell is our primary but we use several other companies as well. When the warranty issue comes up we instruct the parents using the same information that is put out with Guardian. This is usually handled by the coaching staff,” he explained.

“Consumers have to weigh what Riddell says and what we say. I walk people through this. I tell people to look at after-market add-ons and specifically in the car industry, which gives the best example. Helmet add-ons are similar to this industry. If you want to alter or add something to a helmet, the OEM manufacture (refers to the company that originally manufactured the product) to be absolved of liability must prove that the add-on is more dangerous and we have to prove that it is safe. Riddell has not done this. All they have said is that it may void the warranty. I urge you to try and find in writing that they will void the warranty. You may find that they ‘may’ void, but you will not find that they ‘will’ void. It is all pretty convoluted and it’s all based on corporate profits. I don’t blame Clark County for being cautious because they are being perceived as a ‘target’ because of their deep pockets,” Simonds explained.

They are also working with athletic trainers to see if these trainers see a reduction in concussions.

“Anecdotally it’s hard. You just don’t know it’s the Guardian. Maybe you have a different set of athletes that are really an aggressive group of seniors. It’s not really conclusive data so we don’t like to make claims for it,” Simonds said reluctantly.

“We are waiting for medical technology to catch up. We need it to be out of the hands of athletic trainers to diagnose it since concussions are diagnosed differently depending on the athletic trainer. So, until we have a definitive piece of gear that says this is a concussion, we will wait on the data.”