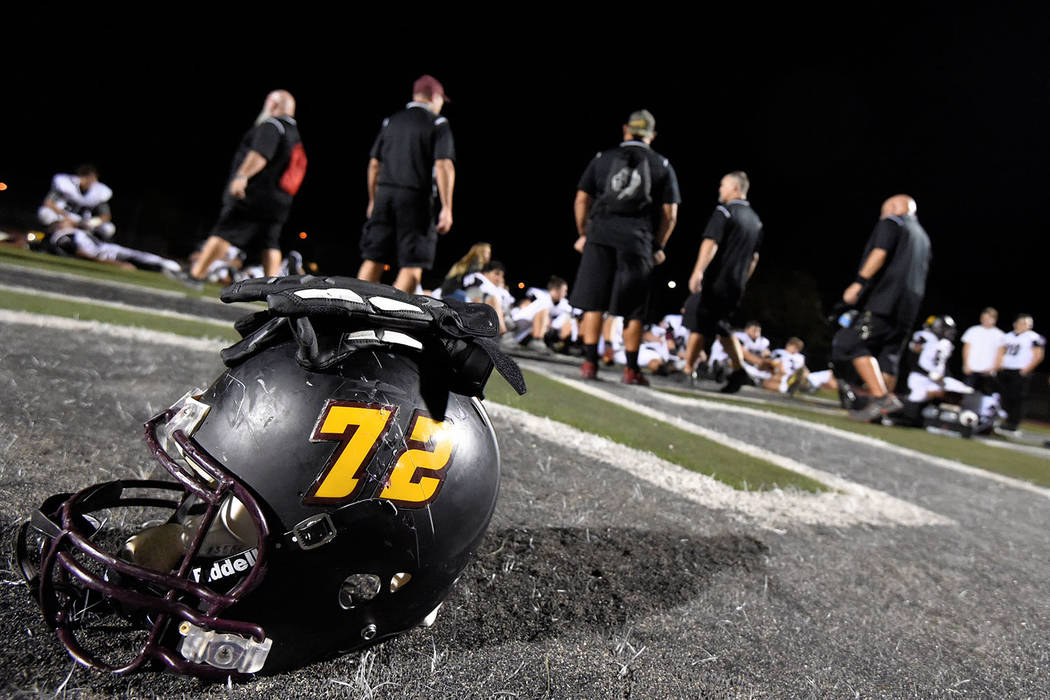 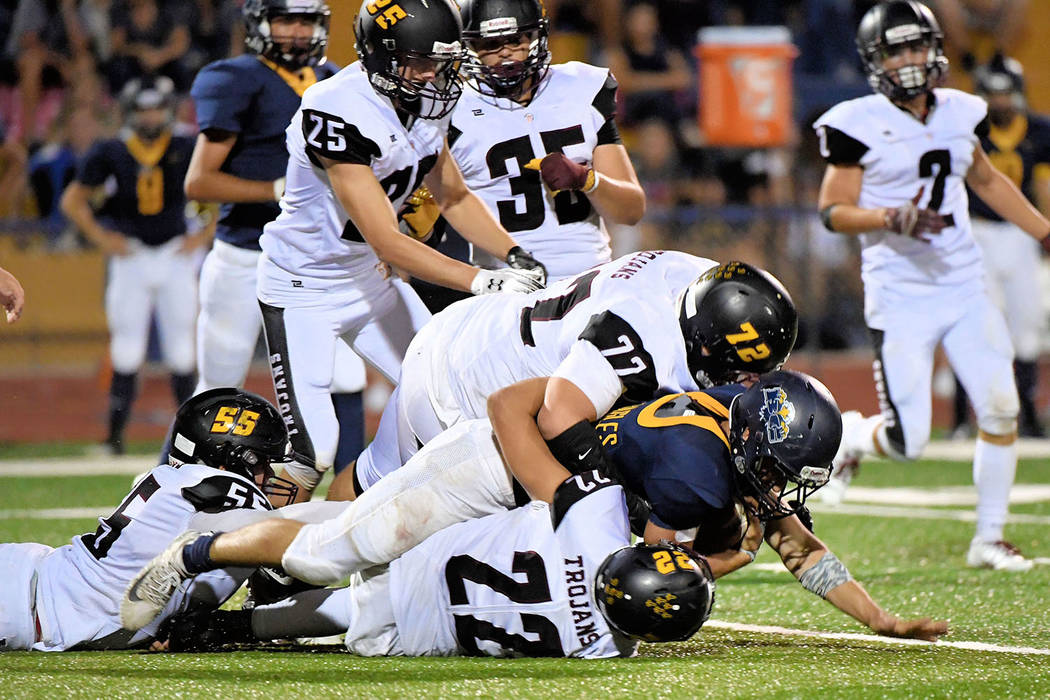 Peter Davis/Special to the Pahrump Valley Times Kody Peugh (55), Caleb Sproul (72) and Anthony Peralta (22) team up to make a tackle during a Sept. 7 game against Boulder City. 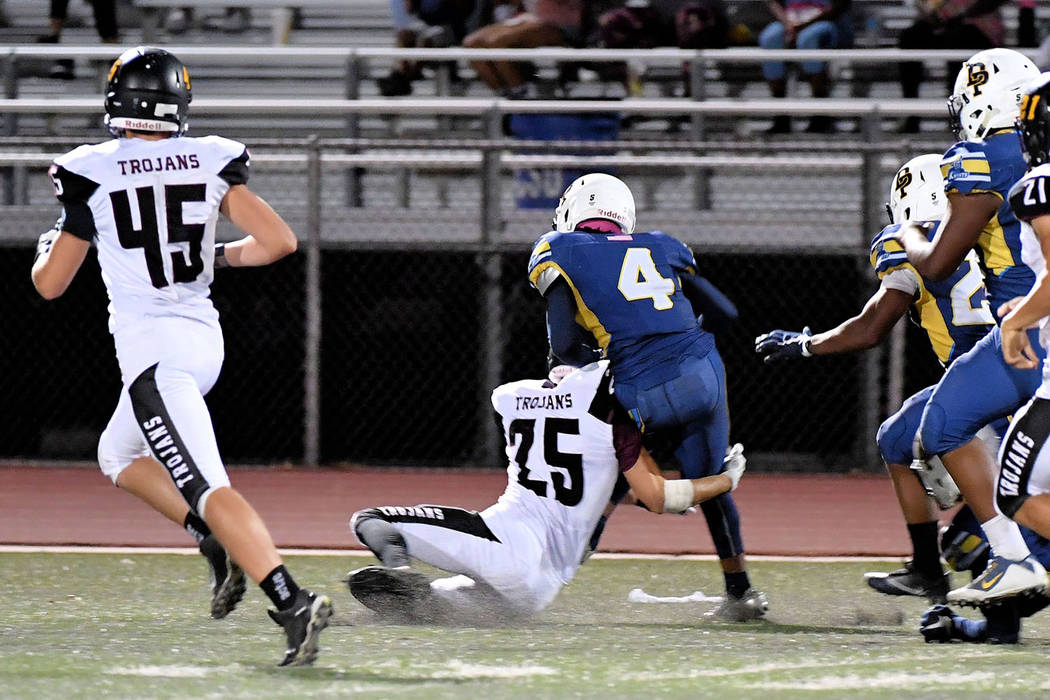 Peter Davis/Special to the Pahrump Valley Times Pahrump Valley's Willie Lucas brings down Democracy Prep's Kemari Cooper during the Trojans' 48-25 win over the Blue Knights on Sept. 21 in Las Vegas.

This is not one of those rah-rah, support-the-home-team kind of columns. I’m way too jaded and cynical for that.

But if you have any interest in the local high school football team, know a neighbor’s kid who plays or maybe is a cheerleader or in the band, or just like football and don’t see much of the high school game, get yourself to Trojan Field tonight to watch Pahrump Valley play Western.

Not because it’s going to be a great game. If it is, the entire Trojans coaching staff will be carted off the field in ambulances. Western is, on paper, no match for the Trojans. The Warriors have scored 26 points all season. The Trojans have scored that many in six out of seven games and netted 24 in the seventh.

So don’t expect a thriller. The Trojans already have played a few of those anyway, and they didn’t work out.

No, the reason anyone with a passing interest should get out there tonight is because this Trojans team has earned your support. It has found ways to improve as the season has progressed, fine-tuning what it already did well and making dramatic improvements in at least one area in which it had struggled.

Oh, yeah, and they are playing for a league title. To put that in perspective, Pahrump Valley (4-3, 3-0 Sunset League) has not finished higher than third in its league in the past 10 seasons. And that happened once. In the past six seasons since dropping down from Class 4A and joining the Sunset League, they have compiled an overall mark of 22-35, 14-20 in the Sunset. The only winning season, both overall and in the league, was 2016, when they went 6-4, 3-2 for that one third-place league finish.

While realignment certainly made the league a bit easier, playing for a title is a big deal for a program that doesn’t hang banners on the wall with any regularity. These kids have worked hard, going back to the early part of the summer, perfecting coach Joe Clayton’s beloved jet offense and improving their pass defense.

And those close losses that now seem so long ago haven’t been repeated, even though two of the past three games were close at halftime. Just as it says in Clayton’s offensive textbook, the Trojans wear down opponents as the game goes on, and they have a penchant for not allowing the opposition to get the ball back down the stretch. They run, they run, and they run some more, taking big chunks of precious time off the clock in the process.

Demoralizing to foes, but pure heaven to fans of old-fashioned football. That has always been Clayton’s style, but this year it could bring home a championship.

That’s fitting, in a way, because there are a lot of seniors on this team. Naming them all risks forgetting somebody, so I won’t try. But up front, guys like Brandon Bunker, Caleb Sproul and Zach Trieb are in their final seasons, as are Nico Velazquez and Casey Flennory, who run through the holes they create, the former a battering ram with surprising speed, the latter a gazelle with tackle-breaking ability. Joey Koenig, who has become a deep threat for young quarterback Dylan Wright, is another senior.

Other seniors include Dylan Grossell, perhaps the team’s best open-field tackler, and Tristan Maughan, who so enjoyed harassing Del Sol’s Andre Nevarez, Southern Nevada’s best quarterback, who had a rather pedestrian performance against the Trojans’ improved pass defense. And there are the injured seniors, such as Josh Belcher and Dee Brown, relegated to the stat crew. Those guys also deserve a good crowd for their last home game.

OK, so technically it’s not their last home game. In all likelihood, the Trojans will play at home during the playoffs. But that’s a different scene. A lot of people come out for playoff games, and the atmosphere is nothing like a regular season game against an 0-7 team.

The last scheduled home game of any season is a big deal. But for a team that has done things not seen around Pahrump in years, it’s a bigger deal. The job is not done — the season ends next week at Valley, then the playoffs begin — but the strides the players have made merit attention and respect.

Throw in the fact that the size of the roster is in line with some 1A schools — you will see a similar number of players on Tonopah’s sideline as Pahrump Valley’s — and you get a real sense of what these guys are doing.

So if you’re not stuck in the rah-rah, come-out-and-cheer-the-local-boys mentality, then come out because these guys deserve a good crowd. They deserve a packed house with some folks standing along the fence.

And, as John Houseman (Google him if you must) used to say in those brokerage ads, they did it the old-fashioned way: They earned it.