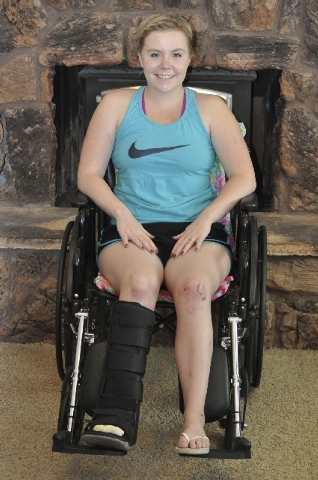 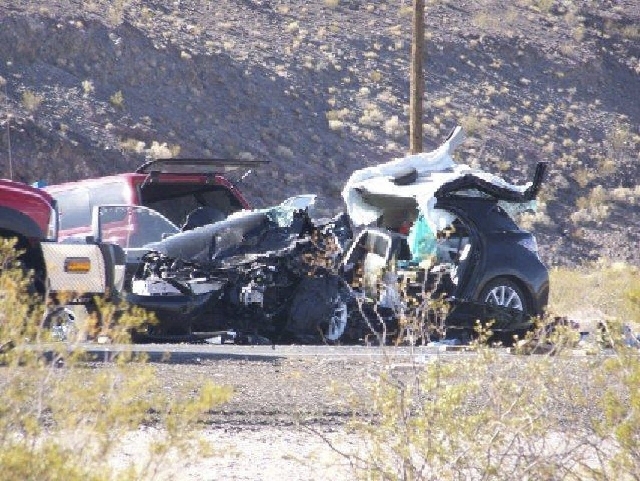 On July 14 Tonopah senior Elise Salsbury was driving home after a relaxing time visiting her aunt in Las Vegas.

It was supposed to be a routine, a trip she had made several times before.

Summer was coming to an end and she was looking forward to a new year as the setter for the Muckers volleyball team. This was supposed to be potentially her best performance as an athlete in high school. All these hopes and dreams came to an end in the blink of an eye in a horrific head-on collision.

On the way home, she was following her boyfriend Eric Reynoso, who was driving in his car ahead of her. They had just made a rest stop in Beatty where Elise texted her mom, Lisa Westerlund, to let her know they would be home soon.

Just outside of Beatty, the couple passed Angel’s Ladies Brothel. It’s there Reynoso and Salsbury tried to pass a semi truck.

Reynoso was able to pass without incident.

“I watched Elise’s car in my rearview mirror to see if she was OK. I saw her car pull out and hoped she saw the other car coming our way. I tapped my brake to warn her so she could get back in the lane. Everything was just happening too fast. I saw her car just hit,” Reynoso said.

Salsbury said when she pulled out she could not see the oncoming car. In her mind it was clear for her to pass the big truck.

“He (Reynoso) had already passed the semi. It was 3 p.m. I looked out and there was no oncoming car. Once I was halfway up on the semi another car appeared. I tried to slam on the brakes and I couldn’t. There was no way I could get back over on my lane. So, I swerved off the road and the other vehicle did too and I tried to get back on the road. The other car followed and we collided,” she said.

Reynoso immediately turned his vehicle around and raced back to his girl.

“I just wanted to get to her to make sure everything was all right,” he said. “I saw the whole driver side was all smashed up. The front tires were backwards and the dashboard was jamming up her left leg. There were airbags all over. I could hear the moans of the other car, but ignored them and went right to Elise. I was just hoping she was OK. I tried to keep her calm. She was conscious the whole time and told me to get her out of the car. I tried, but couldn’t. It then clicked that it was best for the rescue crew to get her out.”

Reynoso didn’t have to wait long. Another car had already called 911.

Although Salsbury did not feel lucky at the moment of impact, somebody was watching over her that day. Just five minutes down the road a hotshot crew from Dayton, Nev. was on its way home. They had been fighting the fires on Mt. Charleston. They heard about the accident and gave assistance to the victims.

Volunteer Beatty Firefighter James Revert gave his account, “There was another fire crew. They had just been released and they were there before us and had two attack lines pulled out and traffic blocked by their engine. They were full-blown paramedics so they were plugging her (Salsbury) into IVs before we even got her out of the car. These guys were very awesome.”

Revert said they arrived just after the Dayton crew.

“We had an amazing response. It was a Sunday and our whole crew was there. We worked on that car getting her out. They collided in such a way that it wrinkled everything up. None of the training we received had prepared me for this. We’re pretty proficient in cutting up a car, but everything was mangled in such a way that our relief cuts were not working. We had to attack that thing eight ways from Sunday. When I got up to Elise she was talking and the first thing she said to me was, ‘I guess volleyball is out of the question.’ Her legs were pinned between the dash and the seat. By the time we got her out we’re all exhausted, and we looked up and they said we got the exact same thing on the other car. It amazes me that there were no fatalities.”

It took almost two hours for the Beatty crew to cut Elise out. The paramedics were not taking any chances. In the crash, Elise broke her left femur and broke her right ankle. She also suffered a lacerated liver. Bleeding out from her injuries was a chance, so she was life flighted to University Medical Center in Las Vegas.

For Westerlund it was the worst day of her life. She had just got a text from her daughter saying they had left Beatty when she got the frantic call from Reynoso.

“He is kind of a jokester so I thought he was joking at first. He said, ‘Hey you better come down here, Elise was in an accident.’ That was the worst phone call any parent can get. Adrenalin filled my body. You don’t know what is going on, and you are just trying to get to your child,” she said. “We arrived 10 minutes on scene just as the her helicopter had left.”

Westerlund could not breathe easy until her daughter had left surgery the following day. Elise had a rod placed into her femur, and screws put into her ankle.

Tonopah volleyball coach Javier Gonzalez heard about his player’s accident on that Sunday.

“I heard about it an hour and a half after it happened. My wife had called me. Our first thought was to make sure Elise was OK. I did not realize the impact it would have on volleyball until after the fact. I was upset for her and her family because there still were a lot of unknowns when it happened. I just wanted to make sure she was going to live. I was just glad to see her and her smile again,” he said.

As far as replacing the setter, the coach said that will come in time and he was just glad Elise was well.

Elise’s surgery was successful but volleyball and basketball were out. The surgery prevents her from competing in any athletics for a year.

She was a second team all-conference setter last year for the state championship team and she started on the varsity girls basketball team.

Regardless of her injuries Salsbury managed to stay upbeat about her situation. She will be rehabilitating for five more months. “This accident happened for a reason. I will still be on the team, but my role has changed. My team will make sure I don’t feel excluded from anything,” she said.

Her mother feels her athleticism will lead to a speedy recovery. Tonopah doesn’t have a rehabilitation center so she does all her rehab work with her dad, Joe Westerlund. She is making great progress and is already using a walker to get around.

Although she has had a horrific accident, and had her senior year demolished by this incident, the teen demonstrates a lot of resolve.

She could be at home feeling sorry for herself, but instead has turned her energies to other people.

“During my two-week stay at UMC, I met a woman who was involved with a program called Child Life,” Salsbury said. “They bring DVDs to young children in the hospital. Some of the DVDs we could keep and others we just borrowed from them. They also bring crafts, and a lot of other things to make sure each child’s hospital stay is as comfortable as possible and I am doing a project where I can give back to them. My community has donated a lot of DVDs for this. I am also purchasing crafts, books, and other things to donate back to Child Life. Once I am able to walk again I am going to drive down to Vegas and donate all of these things to the Child Life program at UMC. ”