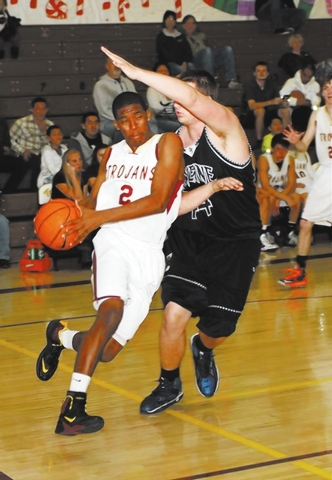 The Pahrump Valley Trojans men’s basketball team is closing out its season with the last three games of the season this week.

The week starts off with the last home game of the season against Mojave at home at 6:30 p.m. During this game, the seniors will be recognized.

The Trojans will then play Faith Lutheran in their last conference game of the year on Thursday. The last game of the season is a non-league game against Sierra Vista.

The Trojans lost a close game to the Western Warriors last Friday 45-41. Trojans Coach John Toomer said his team should have beaten Western.

“We played really bad the first half. We were down 22-11 at the half and we came to within 3 a couple times, but they beat us by 4,” he said. “I think my team was just overlooking them. They also had an entirely different team than we played the first time. They had some eligibility problems and played some new JV players.”

The Trojans are out of the playoffs and will be playing their last games for respect and fun.

“I told the players we have nothing to lose in our last games and go out and have fun. We have the ability, it just is a matter of which team shows up.” Toomer said.