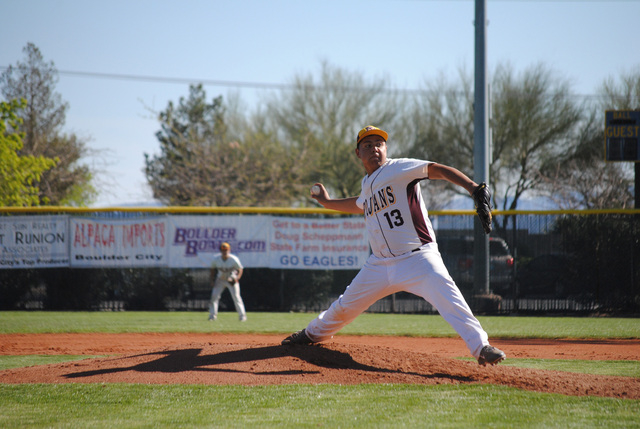 Everything is relative. About last year at the River Valley tourney at the start of the season, Trojans Coach Brian Hayes complained that his team was averaging about 11 errors a game and he said the team needed to cut errors. This year the team started around 4 errors a game. The coach still says his team needs to cut errors as his expectations have changed.

The team played the Boulder City Eagles on Tuesday and lost 12-2.

“Since the last inning of the Parker game (where we blew a 6-2 lead in the last inning), we have not been playing good baseball. Defensively, we are averaging almost 4 errors a game, our pitchers have had trouble throwing strikes (18 runs scored off of walks this season), and we have allowed one big inning in each of our losses (a big inning is giving up 3 or more runs). Offensively, we’ve only had a few guys hit consistently, and hope to get some of our other players getting going soon,” Hayes said.

The team has come a long way in a year’s time. Everything has improved and now the coaching staff is just fine-tuning. Although the team’s record does not reflect success (1-4-1), Hayes feels the team will be fine.

“Although we have not played up to our expectations, it’s only the preseason, and what matters most is that we begin playing good baseball by our first league game on March 31 against Cheyenne. We still have a few starting spots that are still up for grabs and are working on finding our rotation, relievers and a closer,” he said.

Boulder City had two big innings in the 2nd and 5th innings, where they scored 3 runs and 6 runs respectively. Trojans bats were held to just three hits the entire game. Josh Mortensen, Richard Greene and Anthony Vega had the only hits for the team. AJ Segura didn’t play in this game, so a major bat was sidelined.

“We didn’t beat ourselves too bad and we played a good game. We had a few errors here and there, but they didn’t snowball,” Segura said.

“As for Boulder City, we played decent baseball until the last inning, then gave up 6 runs. Although we did make some mistakes defensively (5 errors), Boulder City hit the ball (16 hits). We only had 3 hits,” Hayes lamented.

Mortensen returned to the lineup against Boulder after a brief resting of his arm and played at shortstop. He had injured his arm in the River Valley tourney last week.

“Josh played yesterday and says his arm is good to go. We are not sure if he will be able to pitch for us, which will put a huge hole in our closer role,” Hayes said.

The boys from Troy are on the road again and this time to play in a tournament in Mesquite this weekend.

Next week the team has two preseason games against Legacy and Del Sol.