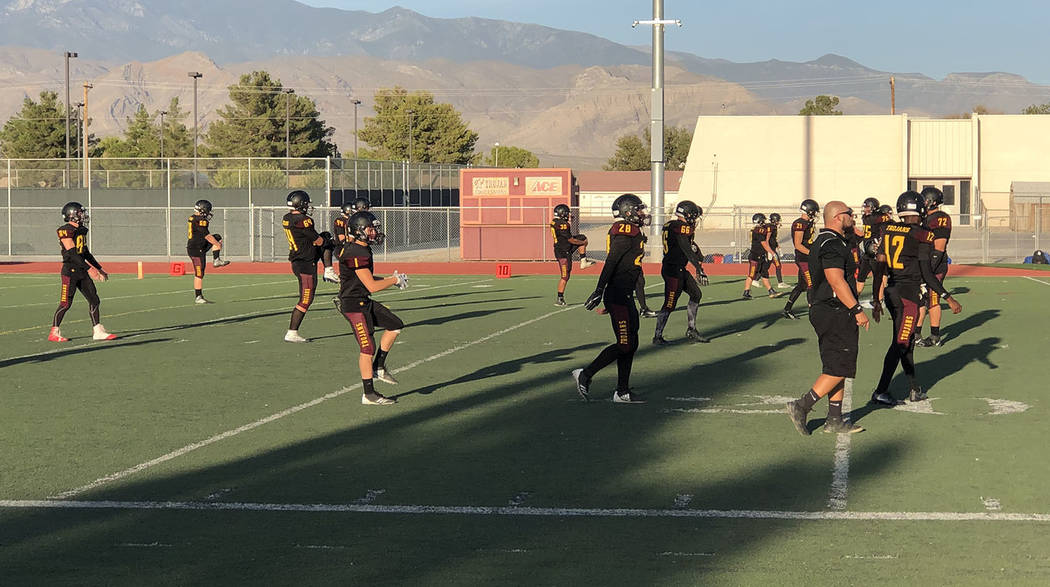 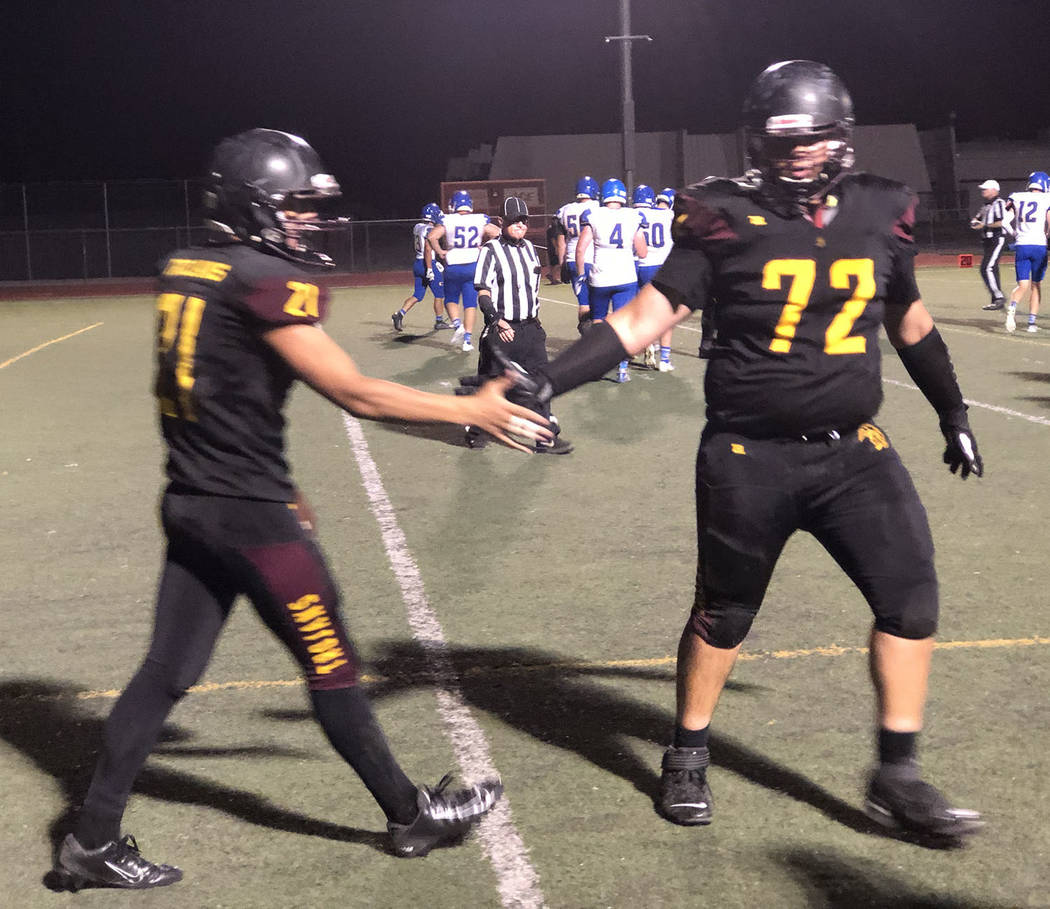 A few days before the start of another Pahrump Valley High School football season, a deal was offered coach Joe Clayton: After a loss, instead of talking right after the game, there would be a post-practice chat about the game Monday afternoon.

Clayton generally is very easy to talk football with, but sometimes it’s best not to poke the bear. Friday night was one such occasion.

The catastrophe that was the Trojans’ come-from-ahead loss to Lowry was the kind of game that is best allowed to settle in the head for a couple of days. Even then, it wasn’t easy to explain.

“We were prepared,” Clayton said Monday. “It was just an awful feeling. From my standpoint as a coach, it was a feeling like you were losing control of the game and didn’t have an answer. It was really tough to watch, and I’m sure it was tough to watch from a fan’s perspective, too.”

After watching the game film, Clayton realized that some of the problems on defense were basic opening-game-type mistakes, rather than problems with conditioning, and the effect was something of a snowball effect.

“At first we were wondering if it was a lack of effort, were we exhausted? We saw a couple of times where we looked like we were fatigued, but what I told the boys was more than anything it was more of a mental fatigue,” CLayton said. “It wasn’t necessarily a lack of effort or being out of shape. I told the boys it was really more of a momentum swing. We had so much momentum in the first half.”

The cost of Armani

It sounds like making excuses, but there is no way to adequately quantify what the absence of Armani McGhee means to the Trojans on both sides of the ball. His impact is not something that can be shrugged off.

“Oh it’s huge,” Clayton said of his 6-foot-2, 295-pound senior right tackle. “He’s possibly our first Division I (football) athlete in this school’s history. Not that (Anthony) rarson did a bad job, he’s just not Armani. With what we do defensively, Armani demands a double team, that’s taking another guy away from blocking one of our linebackers, so he frees up one of our defenders. He’ll always demand a double team because he’s that powerful.”

While the Buckaroos didn’t have many sustained drives in compiling their 46 points, it’s possible McGhee’s absence was felt more on the right side of the offensive line.

“Offensively, Caleb Sproul had one hell of a game,” Clayton said of his senior left tackle. “We ran left a lot. But you’ve got Armani who balances our offense out. You can’t replace him.”

One of the most important plays of the game was an onside kick Lowry executed perfectly following a 57-yard touchdown pass on the first play after the Trojans’ only punt of the game, on the last play of the third quarter, no less.

“That onside kick, they couldn’t do that again if they tried it a hundred times,” Clayton said. “That ball just barely went over the 50, stopped in that little corner. And it wasn’t a lack of effort of us getting after the ball. The placement couldn’t have been any more perfect.”

As the Buckaroos seemed to do throughout the second half, they cashed in on the opportunity. Six plays after recovering the onside kick at the 50, Chance Huitt hit Tyler Neu with a 26-yard touchdown pass to cut the lead to 42-33.

“Right when we made a mistake, they answered perfectly,” Clayton said.

A squib kick then gave Pahrump Valley good field position with 9:10 to go in the game, but three plays later Charles Wiggins returned a Trojan fumble 70 yards to bring the visitors to within two.

“We just couldn’t get the momentum back,” Clayton said. “It wasn’t any one thing.”

It’s not all on the defense

The very next drive was perhaps the biggest example of how life without McGhee is different.

Clinging to a two-point lead with 7:20 to go, the Trojans took over at their own 36. All last year, in that situation, the first thought that popped into anyone’s head on the Pahrump Valley sideline was, “They’re not getting the ball back.” Unless, of course, they scored again.

“That’s what we thought,” Clayton agreed. “The only time we didn’t get a first down was at the most crucial spot.”

After easily getting two first downs on four running plays, the Trojans ran into a wall. The next three plays went for 1, 1 and 2 yards, then Dylan Wright was stopped a yard short on fourth-and-6.

The very next play was Anthony Peterson’s 50-yard run to set up the winning touchdown.

So the last four times the Trojans had the ball were punt, fumble, turnover on downs, fumble. That last one didn’t matter much as the Trojans were in desperation mode at the time. Still, that’s not the offense we’ve come to expect.

Last year’s 41-40 loss in Winnemucca was on the minds of the Trojans as they prepared for their opener, but it was really in their heads as the lead started to slip away.

On the sidelines, there were rumblings even before the lead was threatened. On the fourth play of the second half, with the Trojans up 34-13, there was a fumbled snap that the Trojans were able to recover and even gain a yard on. But two of the assistant coaches exchanged words that hinted it all looked too familiar.

But the Trojans went on to score on that drive to take their biggest lead of the game at 42-13. After that was when things started to go awry.

“It got in my head when they were within nine,” Clayton said of the memories of last year’s loss. “I’m like, oh no, you’re kidding me.”

Of course, the comments on the sideline during the meltdown were just a bit stronger.

Lowry completed just four passes during the game (the run-happy Trojans completed two), but not only did those passes account for 202 yards and three touchdowns, they came at the perfect time for Buckaroos fans who made the long drive.

1. Pahrump Valley takes a 26-6 lead during the second quarter and is threatening to blow out the Buckaroos. But, on third-and-5 from the 25, Huitt finds Kevin Warren crossing over the middle downfield, and Warren turns on the speed and races into the end zone. Not only does Lowry keep the game from getting out of hand too early, the big play showed the Buckaroos they can score quickly, which had to help their confidence as they mounted their second-half comeback.

“That kid’s a good ball player,” Clayton said of Warren, who had four catches for 176 yards and two scores. “We ended up putting Dylan Wright on him later. That slant that he went deep, you couldn’t have had a better defensive play. (Dylan) got his fingers on the ball, and he still caught the ball.”

2. On their first possession of the second half, needing to score on every drive after the Trojans took that 42-13 lead, the Buckaroos faced third-and 13 from their own 17 after losing 9 hards on a first-down fumble Peterson managed to recover. But Warren got open again for 38 yards, and the Trojans were called for roughing the passer to give Lowry the ball on the Pahrump Valley 30. Five plays later, Peterson was in the end zone, and the rally was on.

3. Huitt finds Warren open deep down the left side for a 57-yard touchdown. Not only was the one-play drive the final play of the third quarter — something almost guaranteed to carry momentum into the fourth — but it was the first play after the only Pahrump Valley punt of the game — something almost guaranteed to leave the other team talking to itself.

“The timing of everything just couldn’t be any worse,” Clayton said. “They would have a big play right when they needed it to continue that momentum. We only punted once, and it was the worst time to punt.”

4. On third-and-1 from the Trojans 26, the Buckaroos eschewed running for the first down and instead went for broke, and Huitt found Tyler New for his only catch of the game for the touchdown that pulled Lowry to within nine, and started Clayton thinking about 2018.

Go with who you know

Pahrump Valley has a deep stable of running backs, and it didn’t take long for the Trojans to put that on display. Including quarterback Dylan Wright, nine players carried the ball for the Trojans, combining for 330 yards on 56 carries.

But toward the end of the game, when the Trojans tried in vain to run out the clock, that group wasn’t used for its diversity but for keeping the primary running backs fresh for the stretch run.

With the Trojans ahead 42-19, Wright, Steele Adams, Donnie Miller and Kody Peugh each carried the ball on the only drive that ended in a punt. Because of a successful onside kick, the next time they got the ball back the score was 42-33, and Pahrump Valley turned to its main guys. Margiotta and Avena got the ball on nine consecutive plays before Wright ran a keeper on fourth down.

The next time they got the ball, there were just seconds left and running the ball was not an option.

Stay in your seats, people

The Trojans’ dominance throughout the first half and into the first half of the third quarter led some people to leave early, and those folks were stunned by the outcome.

“I saw my campus monitor at Rosemary Clarke today,” Clayton recalled. “He came up to me and said he had a conversation with the guy who did the halftime Saitta Trudeau kick thing (a fan gets a chance to kick for cash at halftime of each home game, sponsored by Saitta Trudeau Chrysler Jeep Dodge), and he was saying, ‘How about that Pahrump team? Did they (do well) or what?’ And the campus monitor said, ‘You know they lost, right?’ And he couldn’t believe it.

“A lot of people left at halftime because we were (winning), and a lot of them found out after the fact and they couldn’t believe we had lost.”