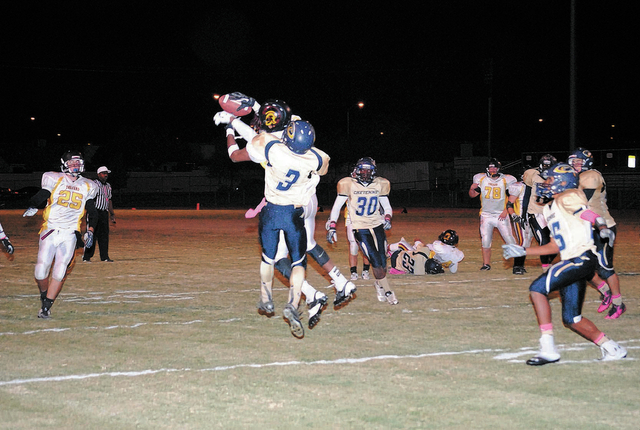 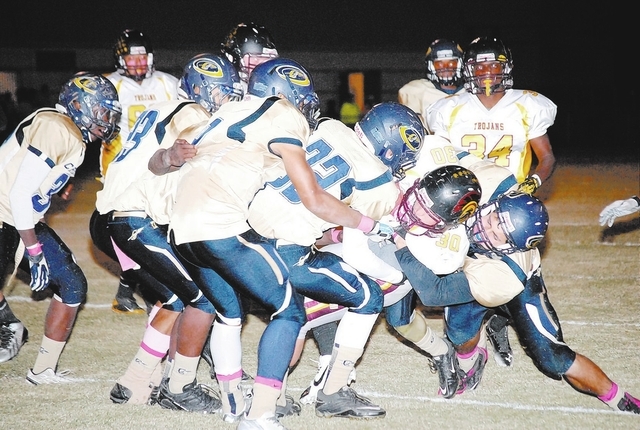 The Trojans led the Cheyenne Desert Shields on Friday at the half 36 to 24. The Shields tied the game in the third quarter and neither team was able to seal the deal in the fourth.

The game went into overtime three times and in the third overtime Zavieh Harrell of the Shields plunged 3 yards into the end zone for a touchdown to end the game 58-52.

The Trojans scored the second most points in a football game since 2004. The most was by the 2004 team, which scored 63 points against Lincoln County.

Pahrump’s offensive stats were through the roof. The team rushed for 195 yards with Scott Maughan leading the team with 25 carries for 125 yards. Maughan had three touchdown runs. On the ground, in the first half alone, the team had 176-yards rushing. AJ Segura was the second rusher with 11 carries for 53 yards.

In the air, TJ Milk threw for 96 yards. Deon Estes had two touchdown receptions and Segura had two.

On special teams the Trojans did well too. Deon Estes ran a kickoff return for 90 yards and punter Chad Uyeno kicked a 72-yard punt, which was his longest of his career.

The Trojans are now 1-1 in league play and will play Faith Lutheran Crusaders, 2-0 in league, on Friday at 7 p.m.

To stop the Crusaders, the Trojans will have to stop the lead rusher for Faith, Keenan Smith, who led his team with 18 carries and 163-yards rushing last week in its victory against Clark. Smith now leads the rushing for the team with 676-yards rushing total. Smith averages 112.7 yards per game with 13 touchdowns on the year.

This should be an interesting duel between the two senior runners Smith and Maughan. Maughan is 5 feet 10 inches tall at 180 pounds who averages 16-yards rushing per game and has 499-yards rushing total on the year with eight touchdowns. Maughan is a straight-ahead runner and is used by the Trojans to pound it out. Maughan just runs right at the tacklers.

Smith is 5 feet 7 inches tall at 160 pounds and relies on his speed to take him around the tackler.

Trojans Coach Joe Clayton said his team must do three things to beat Faith, “We need to be physical on both sides of the ball, bring pressure defensively and execute offensively.