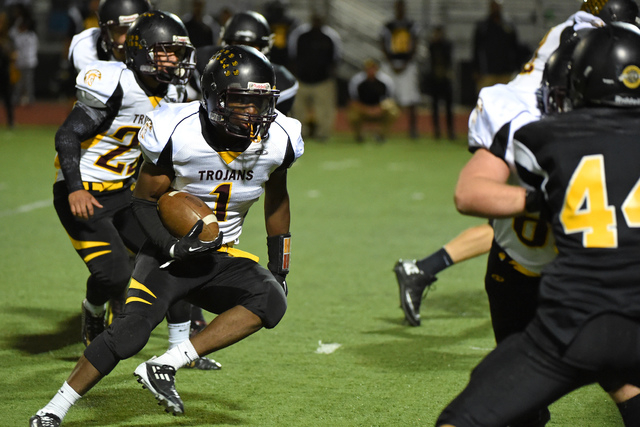 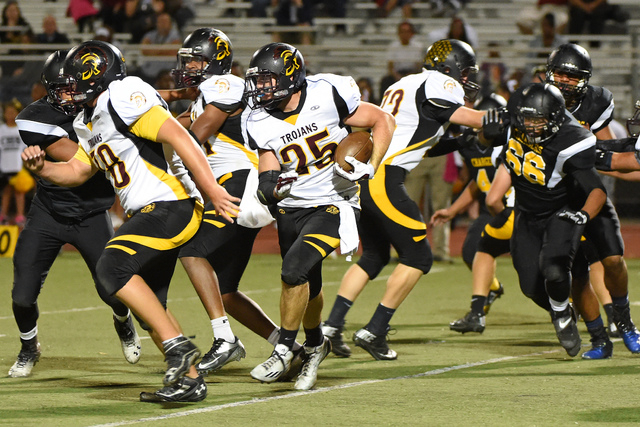 The Trojans posted 359 yards total offense to the 304 yards of the Chargers and still came up short. The Clark Chargers beat the Trojans through the air last Saturday 34-17.

The Trojans offense did a terrific job running the ball and they had numerous first downs, but ended up just short of the end zone.

The Trojans limited TyRek Wells to just 26 yards. The main rusher for the Chargers was quarterback Nick Kinnard, who had 53 yards.

The Chargers may not have been able to run, but they inflicted heavy damage in the passing game. Kinnard (4 for 11) connected for 184 yards passing. Unfortunately for the Trojans the four receptions were for big yards. Early in the first quarter Kinnard passed to Isaiah May for an 89-yard touchdown pass. In the third quarter, Kinnard connected for another big gain and touchdown with Marquice Stuart for a 55-yard pass.

The Chargers also helped themselves out with a Donovan Jackson 86-yard interception of a TJ Milk pass late in the fourth quarter.

The Trojans had one rusher over 100 yards, Tommy Gascoigne with 123. Gascoigne also had two touchdowns. One on a 10-yard run and another on a 1-yard run. Jeremiah England rushed for 60 yards, Keenan Harris for 57 and Deon Estes had 49 yards. Milk had four passing attempts for 59 yards and all four completions were to England.

Trojans Coach Joe Clayton was not pleased with the score. “We just couldn’t put it in the end zone. It was sickening,” he told the PVT after the game.

“We had the ball inside the 20-yard line. I want to say, probably seven or eight times, and not being able to get that score really hurts. We were obviously able to get the ball and drive it there, but, again, not being able to put it in the end zone is the difference. And then they have big playmakers, number 11 (Stuart). We knew number 11 was going to touch the ball, really be quick, and he killed us. He had a long run immediately. We don’t have that speed. When we couldn’t get the scores, we couldn’t match that speed.”

The schedule for the Trojans’ remaining games does not get any easier. This week the Trojans face the Cheyenne Desert Shields at home at 7 p.m. on Thursday.

Cheyenne’s two wins come against Faith Lutheran, who they beat 38-37 and Spring Valley 12-10. Their only conference loss was against Sierra Vista, 29-14.

Cheyenne, under Coach Dave Cochran, likes the ground game with fast running backs. The Shields have 1,326 total yards this year and of that, 918 of it is on the ground. Of that, 918 yards, 527 yards comes from David Walker. Walker is a small fast back in the Cheyenne tradition. He is 5-foot 4 inches tall and weighs 185 pounds. Walker averages 4.79 yards per carry.

The next back for the Shields is Zavieh Harrell, who has 263-yards rushing this season.

Do the Shields pass? Only when they have to. They have 408-yards passing to date. Does this mean they don’t pass well? By all means, no.

Last year the Shields barely beat the Trojans in a 58-52 overtime battle. They just outlasted the Trojans. Cheyenne was able to rush for over for 211 yards and pass for 240 yards during that game. Pahrump Valley defensive backs need to step up and make the big plays against Cheyenne.

The Trojans will need to stop the run and rush the passer to win this year’s battle.

The Trojans should be able to rush the ball against the Shields, but also look for England and Estes to have a good day.

The game should be another high scoring game, 42-36 Trojans.

Peter Davis contributed to this story.