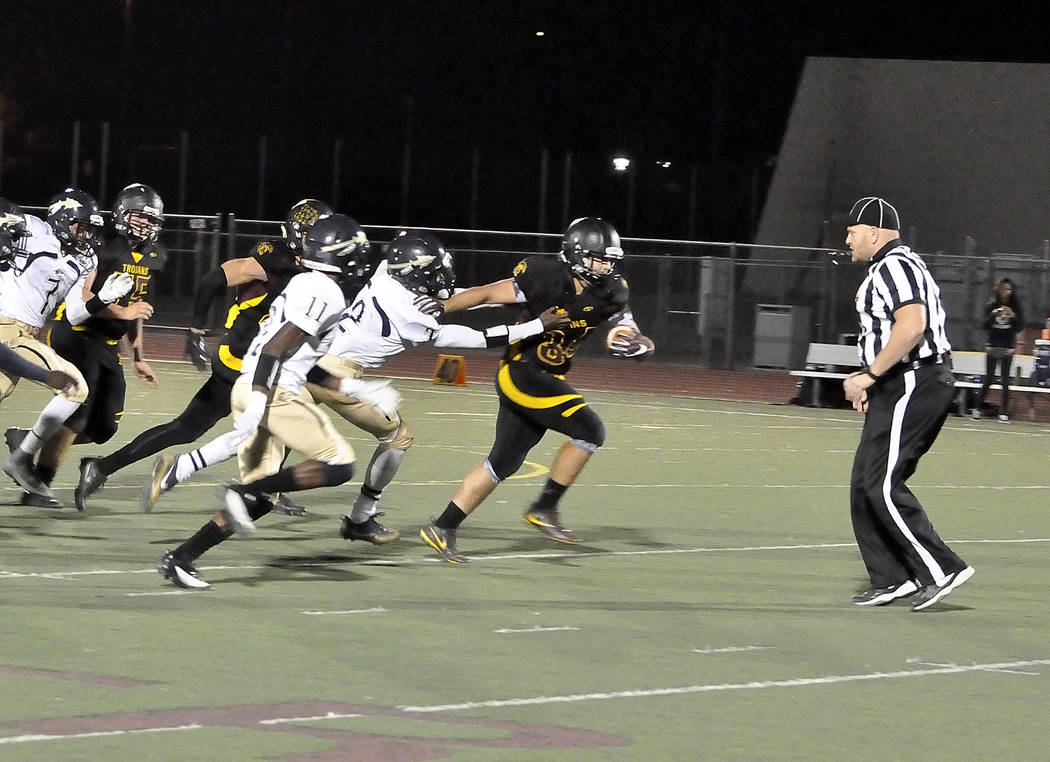 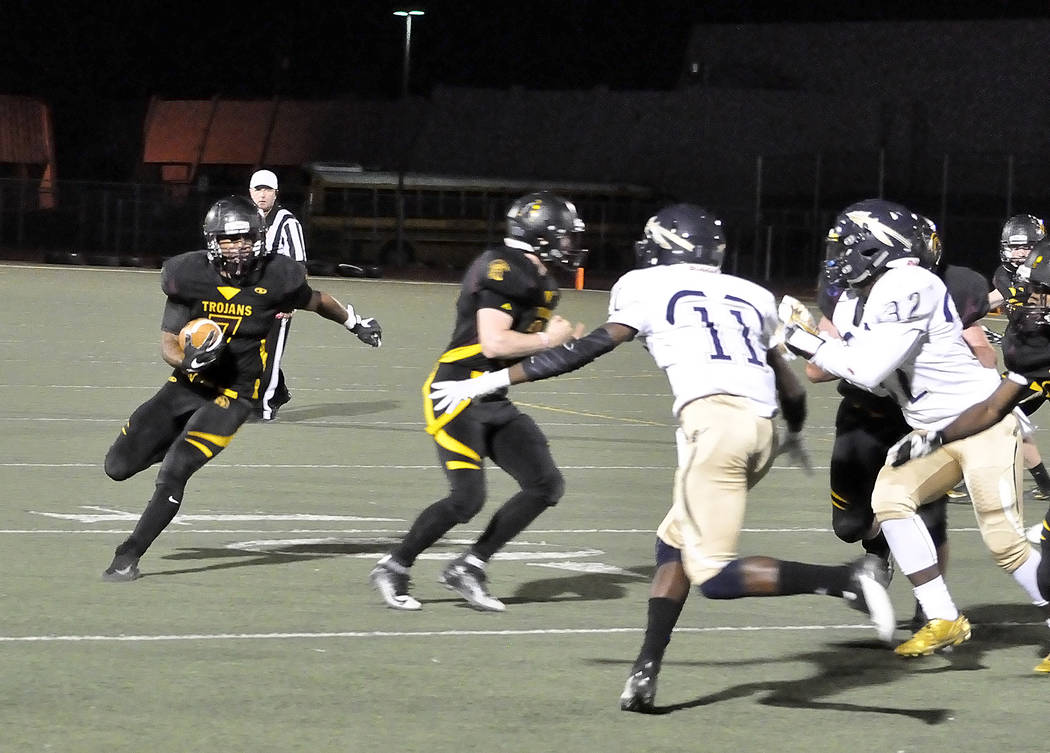 Horace Langford Jr./Pahrump Valley Times DeAngelo Brown is seen with a clear field ahead of him. He also had a big night with 75 yards rushing against Cheyenne. 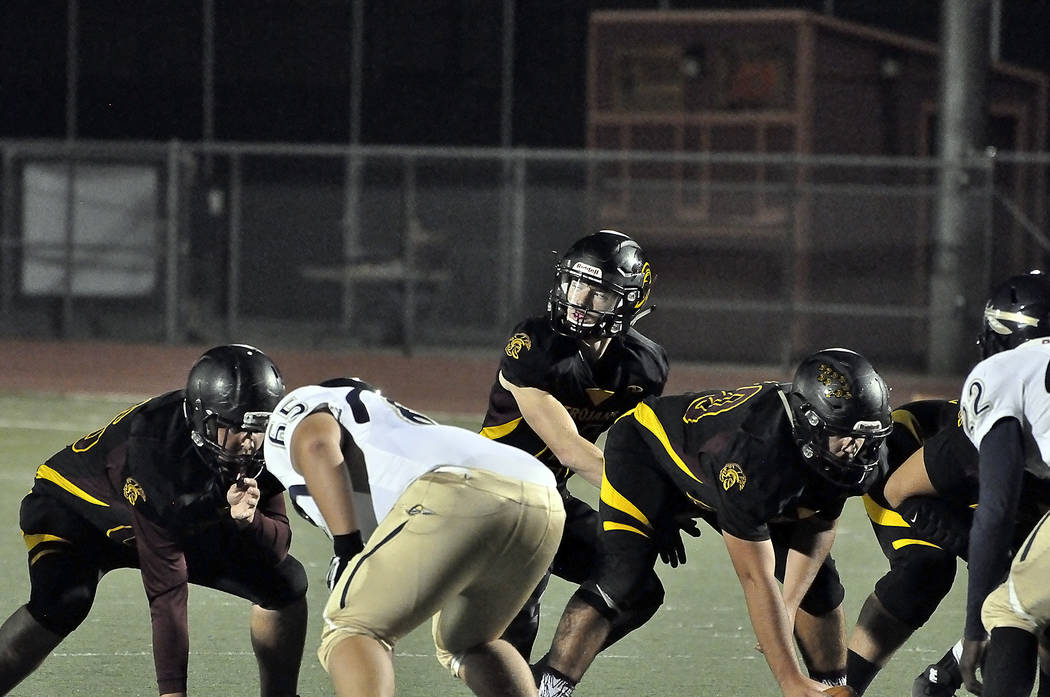 Senior quarterback Dylan Coffman, seen under center, had only 34 yards rushing but he fought hard for every yard and scored two touchdowns on quarterback keepers, running up the middle. 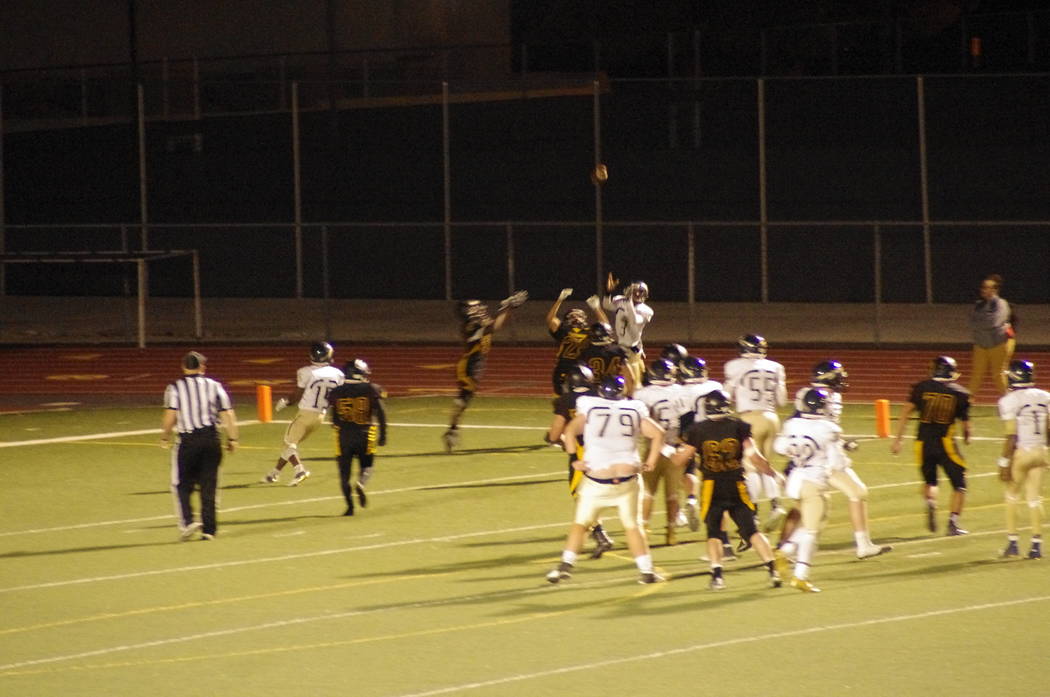 Pahrump Valley did it on the ground Friday night, dominating in time of possession and garnering 355 yards rushing on 61 carries for 5.8 yards per attempt.

The coach was excited about how the defense played. He praised the defense after the game.

“That defensive stand in the fourth quarter was awesome, our defense grew up there a little bit. That is a big league win going into Sunrise Mountain next week.”

Clayton was happy to end a two-game losing trend to Cheyenne. In the last five years, he was the only coach to beat Cheyenne in 2014.

“It feels good because it was our first league win,” Clayton said. “We played really well against Desert Pines last week. We knew if we continued to play like that against Cheyenne that we would have success.”

Clayton said the key to beating the Desert Shields was the defensive and offensive lines.

“The guys up front won this game,” he said. “On both sides of the ball our guys man-handled them for sure. They couldn’t compete with us up front. We knew that going into it and we just told the boys if they just fired off the ball that we would dominate up front. That is what we wanted them to do.”

Trojans running back DeAngelo Brown agreed with his coach.

“Great blocking by the offensive line,” DeAngelo Brown said. “I practiced all summer reading blocks and seeing the holes. We had some new guys step up, sophomore Armani McGhee filled in for Brandon Bunker when he left the game in the first half.”

Coffman also praised his linemen. He ran a lot of quarterback keepers during the game because of them.

“I trust my linemen,” he said. “The guys make good blocks and give me big holes so we can get the yards and the touchdown.”

The Trojans got beaten once or twice on the outside run against Desert Pines and Clayton wasn’t going to let that happen during the Cheyenne game.

“We have seen speed all year long and we were prepared for speed along the edge,” Clayton said. “We knew that kid was a tough runner. When they started running between the tackles, we just stopped them. We knew we would not have issues on the perimeter.”

“I started off the year with an injury and when I came back I was kind of unproductive,” Velazquez said. “Tonight I just exploded. I had great blocking and feel that I am back now.”

In the first quarter the Pahrump defense set the tone early in the game with an interception by senior safety Cory Bergan, on the Desert Shields’ second possession of the game on the Cheyenne 34-yard line, which gave the Trojans great field position in Desert Shields territory.

On the Trojans’ second possession, Pahrump scored again on the seventh play. It was second and goal from the eight-yard line. Velazquez ran the ball in for his second TD of the night to make the score 14-0. The extra point was no good.

Still in the first quarter, Cheyenne scored on their third possession of the game, making it 14-7.

The Trojans started their third offensive series, which ran into the second quarter from their 27-yard line with one minute left in the first quarter. They then drove the ball down the field to score their third TD on a Dylan Coffman quarterback sneak, to make the score 22-7.

Once again the Trojans defense held Cheyenne to a three-and-out. Pahrump took over on the 50-yard line after a short punt.

The key to that drive was Coffman’s only completed pass of the game.

Senior Dylan Coffman had a 36-yard completion to Bergan, who caught the ball on the 12-yard line and ran down to the four-yard line. Two plays later, Coffman ran the ball into the end zone for his second TD of the game to make the score 28-7 at the half.

The game was all Pahrump in the second half. The Trojans dominated the time of possession in the third quarter, running 21 plays and taking 10 minutes off the 12-minute quarter, which gave the Desert Shields only one possession in that quarter.

Cheyenne ran only four plays in the third, having 2:14 to do so.

The Trojans scored their final touchdown in that long third-quarter drive. Junior running back Casey Flennory scored his first TD of the game on a one-yard run into the end zone with 2:53 left in the third to make the score 34-7.

Cheyenne scored its only TD of the third quarter on a screenpass, a 29-yard run after the catch to make it 34-15.