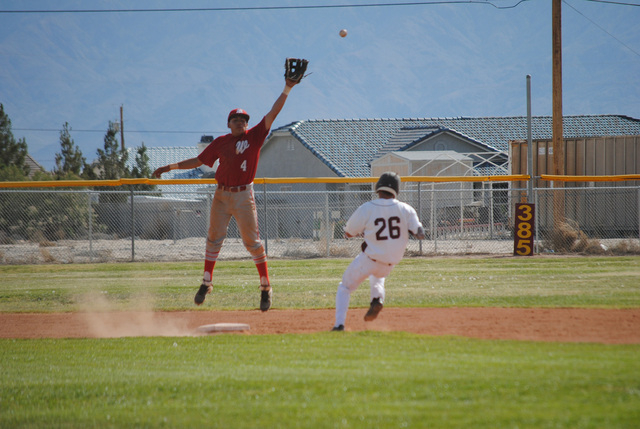 The team traveled to play the Desert Pines baseball squad and beat them 13-7.

Against Desert Pines, the team had 1 error. Josh Mortensen, “Yoshi”, pitched 4-strong innings to pick up the win and also added 3 hits and scored 3 runs. He was named player of the game.

Hayes wants his team to focus on each road game coming up because they can’t afford to lose any more games (5-1).

“Although we have the Faith game coming up, we are focused on the next game, which is Clark. We can’t start thinking ahead because if we lose one of the next two league games, our shot at a league title and the number one seed is gone. We don’t expect Faith to lose another league game. We are focused on Clark today, Western after today, then we get a practice game against Chap (the #1 on the other side), and we will get the kids tuned up for Faith at practice on Saturday,” Hayes said.

In order for the Trojans to have a chance of beating Faith in their second meeting, which is next week on Monday, the team has to be hitting.

The Trojans put pressure on the base pads and try to make other teams make the errors. The team likes to run the ball and has 98 stolen bases as a team with Yoshi leading the team in stolen bases with 31 stolen bases.

Going into Faith Lutheran on Monday of next week the Trojans have a .336 batting average, a 3.8 ERA, and .916 fielding percentage.

Faith Lutheran has similar stats. They have a team batting average of .372, and ERA of 1.43 and a fielding percentage of .949. Faith makes few errors. The interesting aspect about Faith is that Josh Mortensen has almost more stolen bases then the entire Faith team. Faith only has 37 stolen bases, but Faith has a different style of play. They win games on their good pitching and superb defense.

Liberty soundly beat Faith 11-2 and did it with the bat and the solid pitching of Dan Skelling who had an ERA of 2.33. Liberty hit Faith with 14 hits. Basic and Liberty are rated the 2 and 3 respectively in the Southern Nevada Coaches poll. In the game against Coronado the Crusaders committed 2 errors.

“No matter who we play, the goal is always the same, score 7 or more and allow 5 or less. When we do one of these two (or both), we will win games. We don’t have a set rotation for this upcoming week, but we expect to start Uyeno, Gonzalez, Rily, and possibly Mortensen,” the coach said.