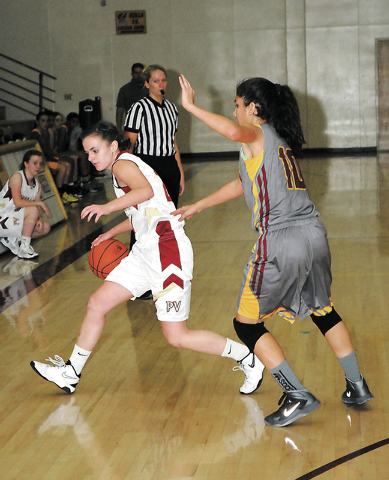 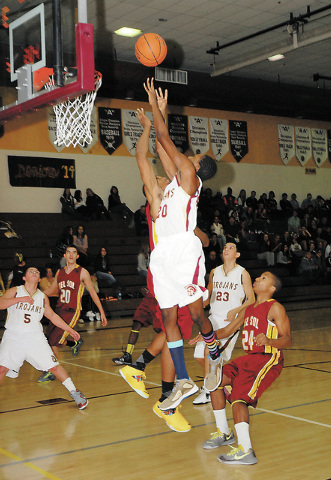 This week both Trojans basketball teams will be playing Clark on Wednesday and Cheyenne on Friday in intense away action. The Trojans will definitely have their hands full in competing against two of the toughest teams in the conference.

The Lady Trojans enter conference play with a 7-7 record which happens to be one of their best starts in the past couple of years.

The Clark Chargers are coming off a decent preseason winning 5 of 6 games and averaging 46 points a game. They scored 71 points against Virgin Valley and Eldorado.

Hagstrom feels this team is second only to the Faith Lutheran team.

“Clark is a very strong team this year. Coach Moulchin has almost his whole team back, and Bobbi Floyd has had an amazing early season thus far. I believe that she’s scored in the 30 plus point range 2-3 times. They are extremely athletic, they trap and play great team defense. From what I’ve seen, their outside shooting is much improved and I think that they will finish 1-2 with Faith this season,” Hagstrom said.

Cheyenne has a record of 2-3 and is also averaging 46 points per game. Hagstrom said they have a lot of new faces this season.

“Number three is a very strong player for them. They like to shoot the three and run, and their toughness on the boards should be an interesting match-up for us. Of the two teams Clark is stronger right now, and will be a tougher match-up for us personally,” she said.

Rebounding and defense will be key points the coach and her team will focus on for the first conferences games. Look for Shayla Dance of the Trojans to have her hands full in the inside. Dance has shown considerable improvement on the inside this year along with the always aggressive Alyssa Murphy.

During the preseason, Pahrump averaged 26 points per game. The team also has played 14 games and has a stronger defense than last year.

“I feel that the biggest difference this year is improved ball handling and shooting the ball more proficiently overall as a team. We still turn the ball over obviously, but we have been able to fight through that adversity as the offense has improved significantly,” Hagstrom said.

Trojans Coach Jennifer Hagstrom also feels her offense is coming along and improving.

“Against Del Sol the girls knocked down shots and hit free throws at a much higher percentage. The coaches feel that game could give us a good push into the league season, and we are hoping that the girls are as excited as we are about the upcoming league schedule.”

Trojans Men’s team will have their hands full against Clark and Cheyenne. For the Trojans they enter conference play with a preseason record of 2-7 and averaging 46.9 points per game.

The Clark Chargers are one of the best teams in the conference entering the regular season 8-4. The Chargers are averaging 59.4 points per game and have a field goal percentage of 48 percent with 13 assists per game. The Chargers are looking to repeat as conference champs and hope to make a run at the state title after a disappointing loss in the title game last year. This team has five players 6 foot 5 inches and above and one player that is 6 foot 9 inches tall at 330 pounds.

The Cheyenne Desert Shields are 2-7 after the preseason too. They are averaging 52.9 points per game with a field goal percentage of 38 percent.

In a phone conversation with Trojans Coach John Toomer, he said the mood of the team is upbeat and he expects his team will go in and do their job.

“We have to work together better as a team and this has been kind of a problem,” he said. “Each game my team does not quit. They play harder and harder and there is no quit in them. It has been fun to watch them mesh together as a team. They all have the desire to win. They understand that they will be out-sized in all the games we play, but the desire is there.”