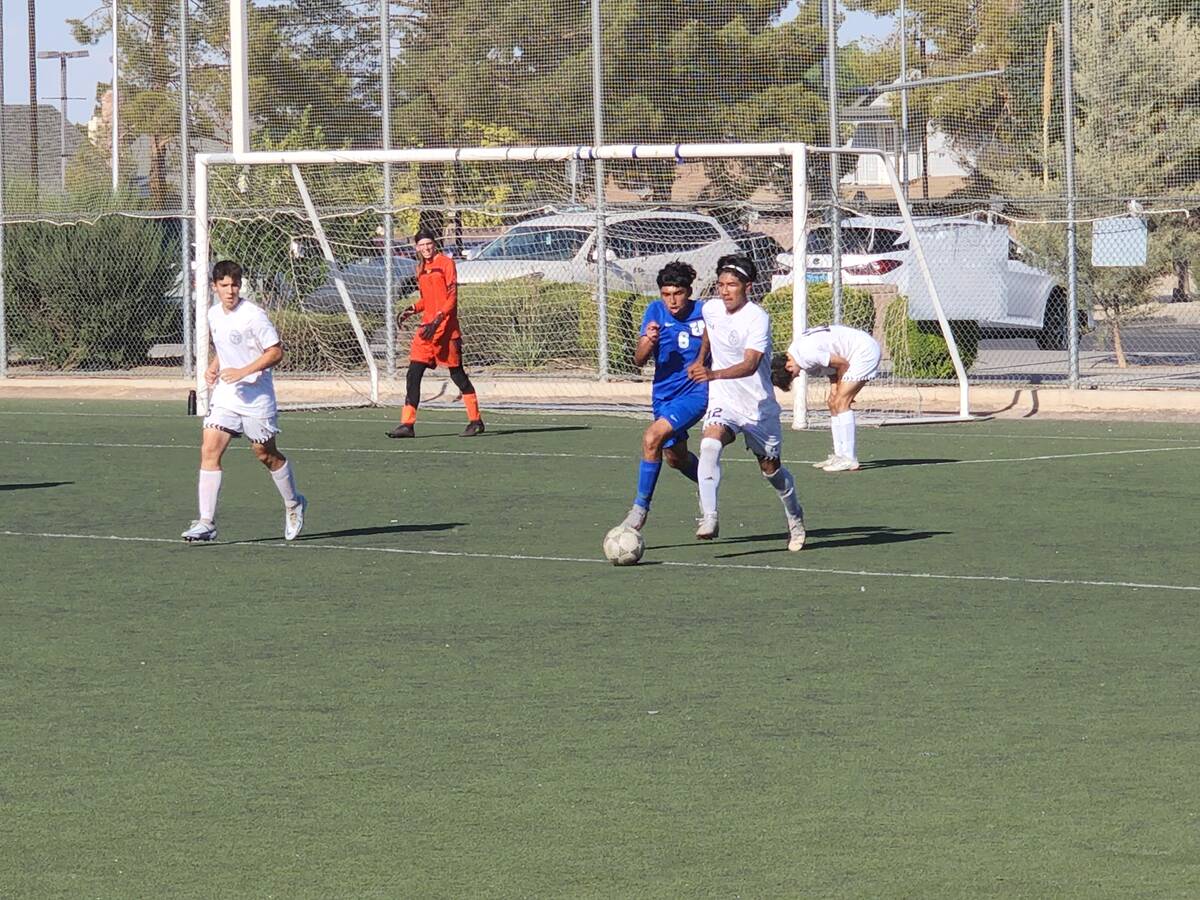 Danny Smyth/Pahrump Valley Times Pahrump Valley defender Jonathan DeLaLez Reyes (12) dribbles the ball away from the Trojans' net after stealing it from an Equipo player.

The Pahrump Valley boys soccer team is still trying to get their first win of the season after being shut out in back-to-back games for the second time this season.

In addition to wins, goals have been hard to come by for the Trojans offense.

They have managed to score just four goals in their seven games this season, with two of those goals coming in a 4-2 loss to Equipo Academy last week.

At 0-7 on the season, this is the longest losing streak to begin a season in the last 10 years for Pahrump Valley.

In their losses this week, the Trojans were defeated 4-0 in a road game at Basic High School on Monday night and 4-0 in another road game Wednesday night against SLAM Nevada.

Senior midfielder Winston Nunfio currently leads the Trojans with two goals and he is the only Pahrump player to have recorded an assist this season.

Nunfio has already surpassed his season total of one goal from last year.

Pahrump Valley will be at home for their two games next week.

They’ll begin with a non-league matchup against Cristo Rey St. Viator on Tuesday, Sept. 20, followed by a league game against Somerset Sky Pointe on Thursday, Sept. 22.

The St. Viator Royals are currently 1-8 on the season and will have another game this Friday against Equipo Academy before playing the Trojans.

The Royals are in the middle of a five-game losing streak, with two of the losses being forfeits against Boulder City and Pinecrest Sloan Canyon.

This matchup could give the Trojans a good chance at breaking their losing streak and getting their first win of the season.

The Somerset Eagles have a 3-3 record on the year after defeating the Boulder City Eagles on Wednesday night by a score of 5-2.

The Eagles will face off against the Basic Wolves on Tuesday, Sept. 20, before heading over the hump next Thursday.

Pahrump Valley’s game against St. Viator is scheduled to kick off at 5:30 p.m.