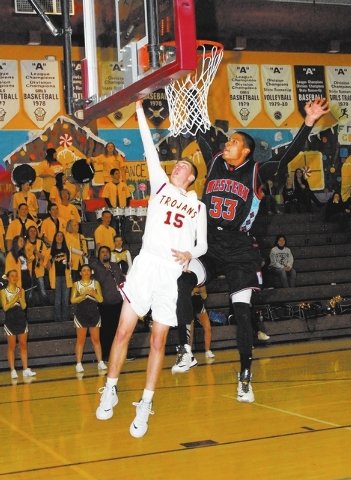 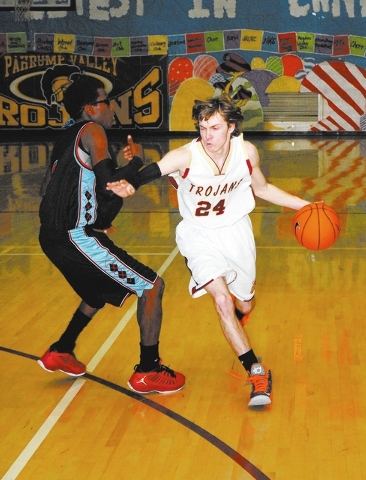 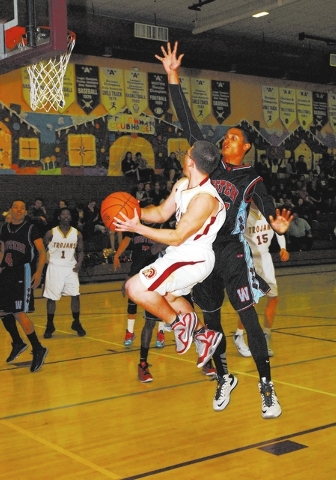 The Trojans men’s basketball fought hard for their first league win in double overtime on Tuesday night. The game was a real roller coaster ride as the team fought for the lead, got it, lost it, tied it and finally won it in the second overtime period 67-64.

The Trojans were behind the entire first half. It was 13-10 Western at the end of the first quarter and 29-22 at the end of the second. During the whole game both teams struggled with making shots and free throws.

Trojans Coach John Toomer must have said something to his team in the third because by the end of the third quarter the Trojans had taken the lead 43-39.

In the fourth quarter, the boys had a 48-43 lead with 3:20 to go in the game but could not hold on. In the final minutes, they had a chance to ice the game with some clutch free throws but could not do it and the game went into overtime tied at 50.

To make matters worse for the Trojans, by the end of regulation the Trojans had to play without Jesse Crain, Rudy Uresti and Devon Montgomery due to foul trouble.

In the first 4-minute overtime period, the two teams fought for a lead but could not make any headway. Again, it came down to free throws. The Trojans sunk a few and so did the Warriors but neither team sunk enough to win it. The overtime period ended in a tie, 54-54.

The second overtime period saw the Trojans aggressively attack the basket. Within the first two minutes, the Trojans had a five-point lead. Toomer told his team to give it their all.

“I had told them before the second overtime that every man had to get their man and they had to be more aggressive than they had been during the whole game,” Toomer said.

The crowd felt the energy of the team and was thinking it was going to be an easy win from there, but within a minute the two teams were tied again at 60-60.

With less than a minute to go on the clock, the Trojans were tied at 64-64 and it looked like the team was going to have to suffer through another overtime period.

Just before the last few seconds of the game the Trojans took their final time out.

There were 10.3 seconds on the clock and the Trojans had the ball. They drove down the court with time ticking off. The crowd was chanting loudly, “Trojans.” The ball went to No. 24 Uriel Ramberg-Wiley, who had made numerous shot attempts from the three-point line all night (he was 1-5). He was wide open just to the left of the top of the key and took the shot and he sunk it to win the game.

“I did not think I was going to get the ball,” Ramberg-Wiley said. “It just happened and it was there and I took it. I was wide-open at the pass. There was nobody in the way so I took the shot. I was a bit nervous. It really did not matter how many I missed before. It just has to count at the end of the night.”

Toomer was in disbelief at first as the ball traveled to the basket.

“When Uriel shot that shot I said, ‘Oh no, no, no … good shot.’ To me he was out there quite a ways and I thought, ‘Holy crap.’ He is one of the better 3-point shooters if he has time to set up,” Toomer said. “He had plenty of time and nobody came after him. He was 2-6 on the night. Of the six he took, most of them were right on line and they were all quality shots. That last one was wow!”

Free throws were crucial during the second overtime for both teams. The Trojans did kick it in to make some clutch free throws which kept them in the game in overtime and probably won it for them.

“I had to tell them, ‘Guys, these are free throws. No one is guarding you. Use your legs and follow through and take your time. Jerrod was 3-4 in overtime and it all worked out and this was crucial to winning the game. “

The Trojans play three straight games at home starting with non-league game against Bonanza on Monday and then two straight games against Faith Lutheran on Wednesday and Clark on Thursday.

The Lady Trojans had a disappointing loss to Western, 43-30. The girls will go for their first league win next week, starting with Faith and finishing with Clark on Wednesday and Thursday of next week.