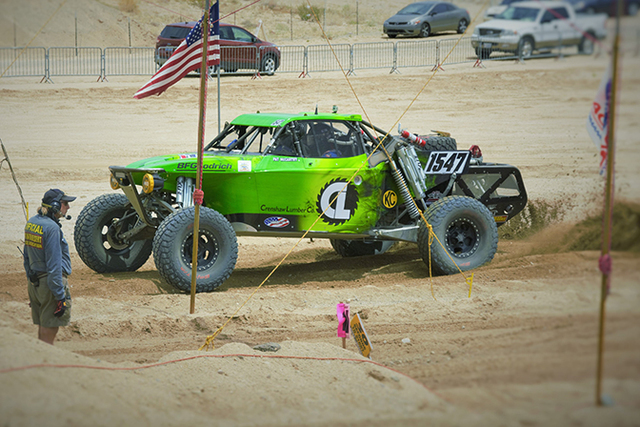 Special to the Pahrump Valley Times Pat McCarthy’s “Jimco Champion” at the start of a desert race. The Jimco Champion has 750 horsepower under the hood. 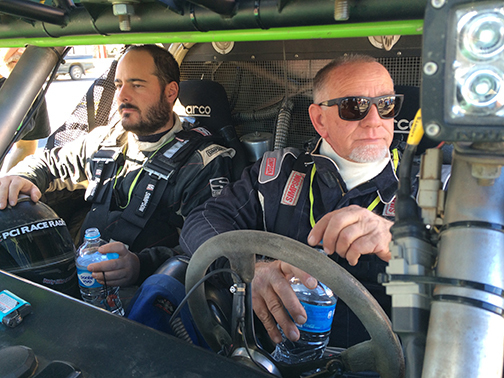 Special to the Pahrump Valley Times Above, racer Pat McCarthy (driver), getting ready to race his off-road 1500 Class car in the desert. McCarthy has only been racing for the past six years and has enough points to win the Best in The Desert Championship in his class. 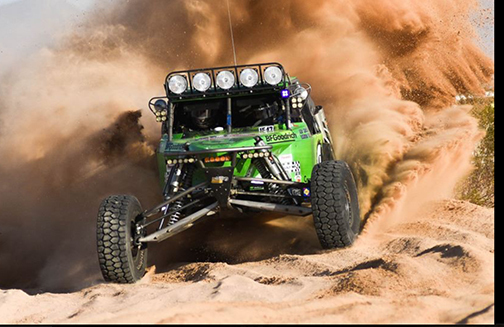 Special to the Pahrump Valley Times Pat McCarthy’s Jimco racer eating dust as it travels through the desert. McCarthy should make a strong showing in his class in the upcoming two-day General Tire Vegas to Reno Race on Aug. 17.

One probably has heard all the senior citizen driving jokes in Pahrump by now.

But no one is joking about this senior citzen, General Tire Vegas to Reno racer Pat McCarthy, who could be the next Best in the Desert Class 1500 Champion this year. According to him, to win the championship he just has to finish the Vegas to Reno race on August 17.

As a senior citizen at 62, hes taking the Best in the Desert racing circuit by storm and just starting his race career at the time most are winding down.

This racer looks at his off-road racing as something he gets to do at this time of his life. Its not work. He did that. He provided for his family and now he feels its his turn to have fun.

I worked to give them a good life, he said. And now I am living a dream.

The racing just came natural to him. It was something that came from just tooling around in the desert for fun.

I love the desert, and got started in off-road racing with dune buggies, McCarthy said. I just basically started in the sport enjoying the desert and just playing around.

The playing around led to serious racing as a sportsman class driver, but his first races were nothing to write home to mom about.

I remember my first race in Barstow (California), he said. It was with Mojave Desert Racing and I just wanted to race as a sportsman but this old-timer had different plans. Were not racing sportsman, he told me. Go get a professional class number, he said. I remember paying the extra $800 to change classes and I did all that and we didnt even finish the race but we had a blast doing it.

The MDR racing got him started in off-road and he ran that for awhile before he got started with Best in the Desert racing.

McCarthy also got into racing in off-road in Mexico, competing in the Baja 500 and the 1000.

I blew my motor before the race two years ago and this year I qualified, but my car died on me again, McCarthy said. So for that race I never made it to the start line.

McCarthy said racing in Mexico is the ultimate in fun.

We would go down for the 1000 for 10 days, the racer said. We would prerun the course. We would throw sleeping bags in the car and just have a blast. Its just a different feel to it than the Best in the Desert Racing.

Racing in Best in the Desert

McCarthy loves both Mexico and Best in the Desert. He feels they both have their place in off-road racing.

How would he define his chances of winning the Vegas to Reno race?

Basically, winning the race, so much is talent and so much is luck, he said. The class I race is unlimited. You can put a lot of money into the car. Some say its about the money and what you put into the car, but even the best drivers and cars out there can get flats too and also can break down. If our car is there, then we have a chance.

McCarthy said he feels he can hang with the best, and in this case this means Cody Parkhouse, who is a two-time champion of the Baja 500 and trailing in second to McCarthy in Best in the Desert points for the class championship.

Parkhouse has the same car as I do and I beat him at Parker, McCarthy said. This was a race where he finished third in his class.

I feel my skill level is well below his, but with every race I still get better. McCarthy said.

For the Vegas to Reno race, McCarthy wants to finish in the top 10.

Its a long way to go, he said. If I just finish it will be successful.

McCarthy drives a lightly-used Jimco Champion Class car. When he bought the car it had never been raced.

His car has 760 horsepower, Fox shocks and 37-inch tires.

What he likes about racing is the speed and the technical aspects of racing.

I love opening the vehicle up at 130 miles per hour, the racer said. When you make those giant jumps, thats the moment you have to make sure everything is right.

According to McCarthy, there is never a dull moment while you race if you are driving.

Your adrenaline pumps, you are alert the whole time you are driving because you are so excited to be out there, McCarthy said. Someone could be on your tail, or you could be on someones tail, you try to catch them and thats where the excitement is.

McCarthy believes he has a few years left in him and he definitely will be a contender and said the key to winning is being consistent.

I am first in points now and I will keep running with it, McCarthy said. There are guys that are so much better than me. The key is finishing in every race. We can finish. I am getting luckier.