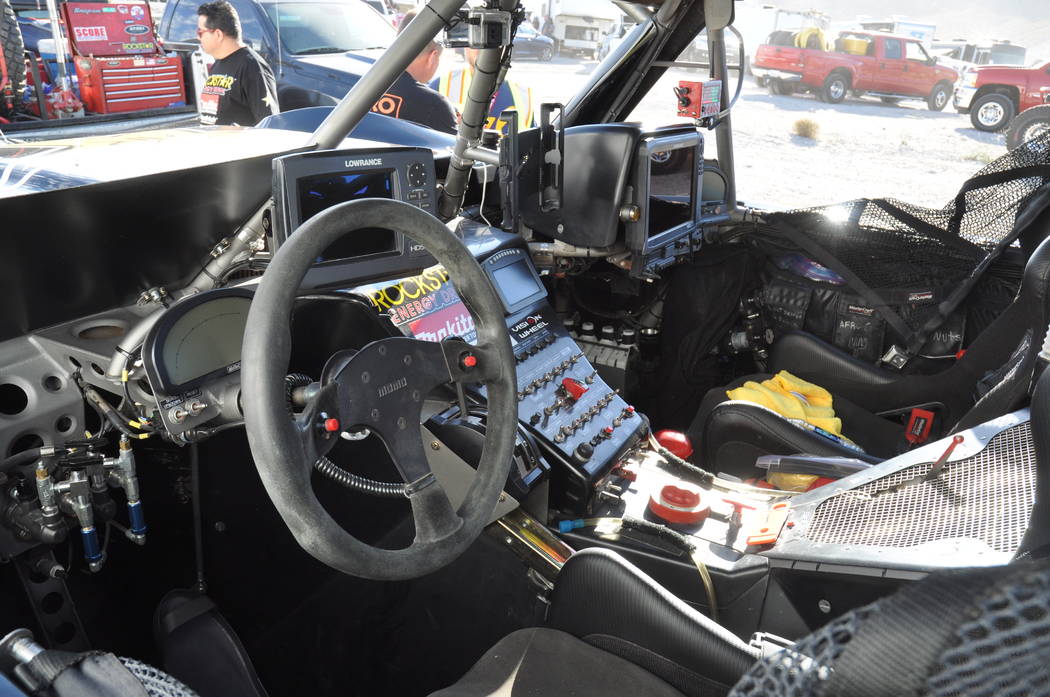 Horace Langford Jr./Pahrump Valley Times The cockpit of Rob MacCachren’s Trick Truck on race day. The inside looks more like a jet cockpit than it does a race truck. 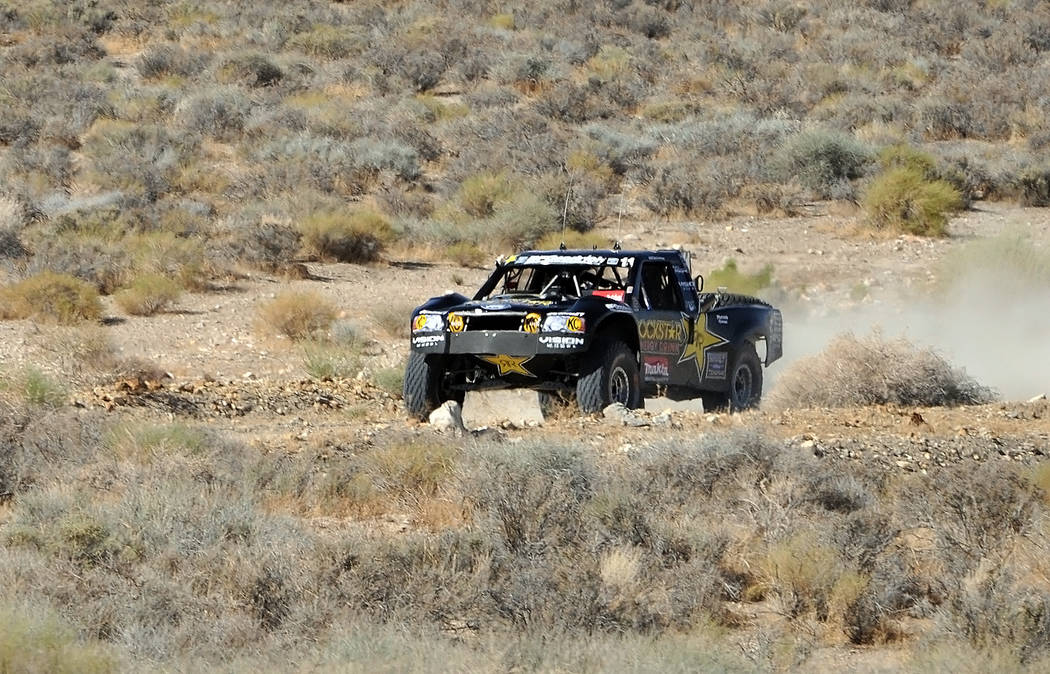 Rob MacCachren’s Rock Star Energy truck, No. 11, a couple of miles into the race at high speed outside of Beatty. 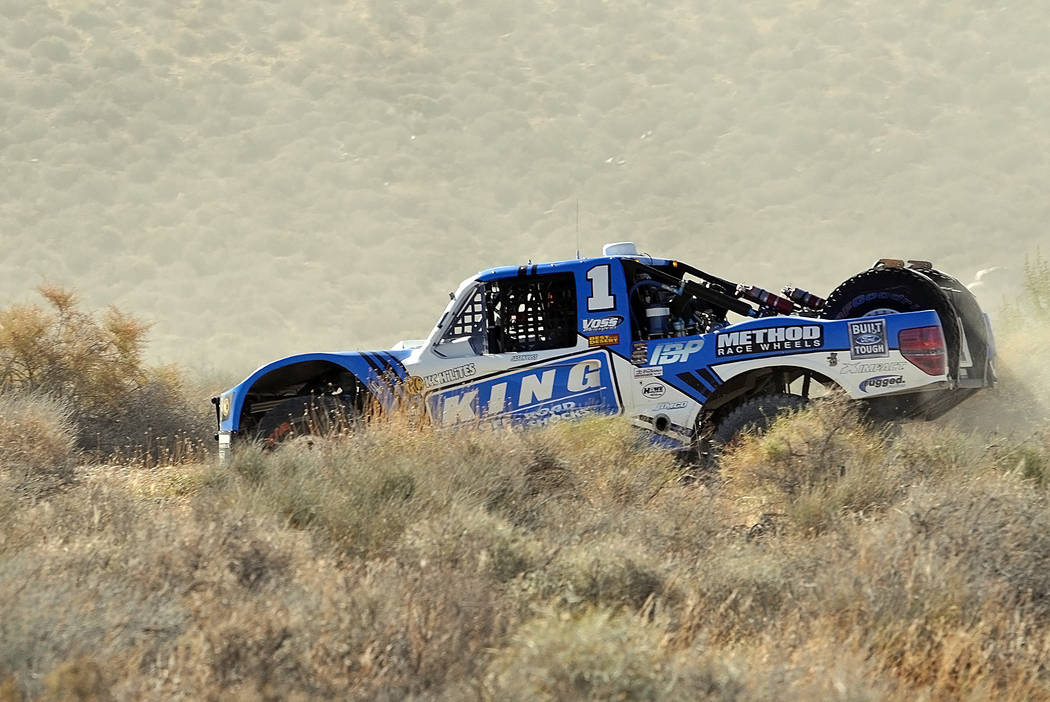 Jason Voss, the winner of Vegas to Reno in his No. 1 King Shocks truck outside of Beatty traveling near full speed. Voss won his fourth Vegas to Reno race in five years. He should be appearing in the Tonopah 250 and the Pahrump Nugget 250 because he is in contention for the Best in the Desert championship. 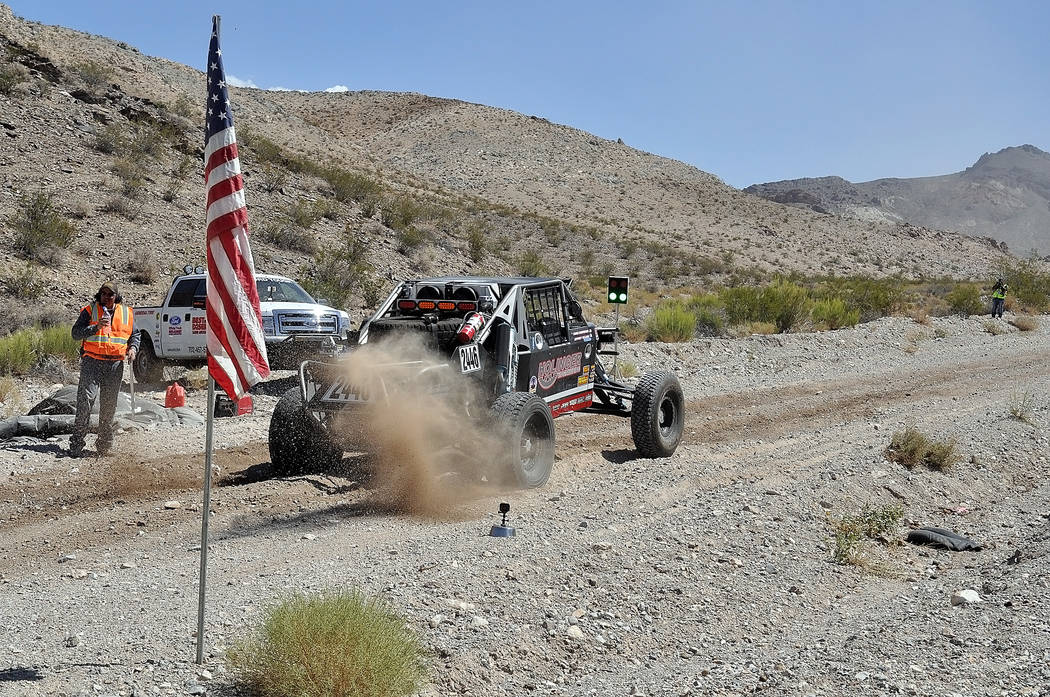 Horace Langford Jr./Pahrump Valley Times A Vegas to Reno UTV starts at the starting line for the race in Beatty. The town of Beatty was slammed by thousands of racers and their support crews. The town was prepared though and only ran out of ice.

This year he started from the third qualifying position and quickly got out in front of the pack and at the halfway point remained in position to take the win with a time of 9 hours, 2 minutes and 27 seconds.

The win keeps Voss in the lead for the Best in the Desert Series Championship, a series he has won previously.

MacCachren was going for his first Vegas to Reno win, but fell short of his goal, finishing in sixth place due to mechanical issues.

“We had issues with the rear hub seal leaking at pit 10,” Amber Maloy, MacCachren’s significant other said. “This then caused a small grease fire and held Rob up at the pit until it was under control. Once he got back into the race, already six trophy trucks had passed. So he was 15th on the time, but he was able to make up some time and pass some guys to end up the fourth truck to finish and sixth place overall on time.”

His crew chief, Jim Blackmore, said before the race that any issues would keep them from winning.

Blackmore said mechanical problems had kept MacCachren from winning before.

“We had some part failures that cost us a win,” he said. “We should have won Parker (race) and salvaged a second. We pay attention to that stuff and we try to make it better. We are always trying to inspect parts. Even if the part finishes the race we inspect it.”

Blackmore said that despite the length of the race, that “the pace is higher now.” He said this 500-mile race is like the 250 used to be.

“Before on a 500-mile race you would take it easy a bit at the start,” he said. “Now it’s go. It’s like if you have a flat tire you might not win the race. It is incredible. I have been doing this a lot of years and so has Rob. Before it was like saving the truck and now it’s —you still have to save the truck but the parts are way better.”

According to Blackmore if a team wants to win Vegas to Reno, the team can’t afford any mistakes or issues with the truck.

“If you get a gap, it is hard to make that up,” Blackmore said. “Sometimes a guy will take off, and if you don’t stay near him it’s hard to make up the time. There is a lot of good teams out there. And they are hungry to beat us. At the 1,000, we will have a target on our back. And there is a lot of pressure.”

MacCachren’s next big race will be the 50th anniversary of the running of the Baja 1000 on Nov. 16. At last year’s Baja 1000, Voss split time behind the wheel with MacCachren for the win. The two will combine their efforts again this year according to Malloy. A win at Baja for MacCachren will be his fourth consecutive win at the Baja 1000.