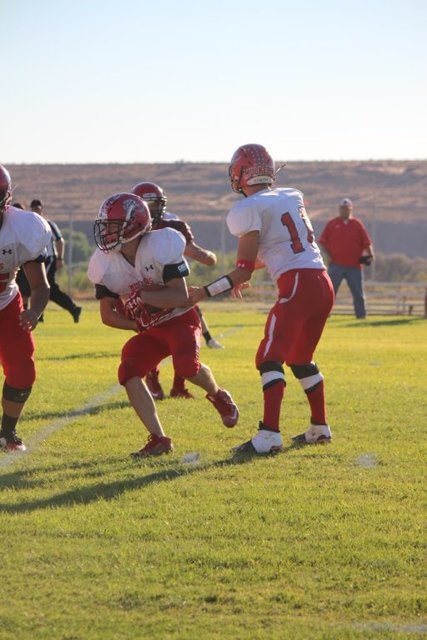 Kade Bunker gets the ball against Spring Mountain last week. The Muckers will try to reload their running game against Beatty this Friday. Penny Otteson / Special to the Times-Bonanza & Goldfield News

The Muckers football team suffered its second loss of the season, losing 61-6 to Spring Mountain, but have to pick up the pieces because they have to face their rival to the south, Beatty this Friday.

In the game against the Golden Eagles (4-2 overall, 4-1 Class 1A Southern), turnovers and penalties played a significant role in the loss.

“We had two false starts through six games and in this game we had seven false starts,” Muckers coach Duffy Otteson said. “Mental errors have hurt us in the last two weeks.”

The lone touchdown for Tonopah was scored by Tanner Otteson on a QB keeper.

The Tonopah (5-2, 3-2) defense has been very good this season at stopping the run and holding teams to an average of 50 yards per game, but against Spring Mountain this wasn’t the case.

“We didn’t have the speed to keep up with them and we gave up too many long plays,” the coach said.

Defensively, Brendon Eason had a nice game, leading the Muckers with 10 tackles, a blocked kick and a forced fumble, followed by Otteson with eight tackles. Freddie Lopez had four tackles; Jordon Berkowitz had three tackles and a fumble recovery. Tonopah will look to Eason and Berkowitz to stop the Hornets’ run game.

The Muckers offense also had problems and was held to just over 120 yards total in offense.

Otteson completed three of 10 passes for 18 yards and had one interception.

“Our quarterback had no time to throw the ball,” Otteson said. Their defensive line was in our backfield all day long and it was hard to even get a play off.”

The offense can keep up with Beatty’s (6-1, 4-1) run game. The Muckers have some speedsters. This season the team is averaging 307 yards per game on the ground. The running attack is led by QB Tanner Otteson with 677 yards, followed by Kade Bunker at 532 yards per game.

This game will come down to which team has more speed in the rushing game since both teams like to run.

“We need to play a mistake-free game to beat the Hornets, they are a good team with a lot of speed,” said Otteson.

Running is all Beatty will do. They pass maybe one or two times per game and that’s it. The Hornets also average around 300-400 yards per game rushing. Their lead rusher is Michael Olson, who scored three rushing TDs in their 58-0 shutout of Round Mountain. They also have Jhon Paul Adajar, who is very quick.

The Hornets like to keep it simple with its power I football. They play mostly seniors on both the offensive line and defensive line. Hugo Mendoza, the senior fullback, is a great blocker.

Beatty also lost to Spring Mountain 41-0. The Golden Eagles ran for 147 yards against Beatty and beat them on the pass with 259 yards in the air. This might be a weakness that Tonopah can exploit. Tanner Otteson might have to go to the air to beat the Hornets.