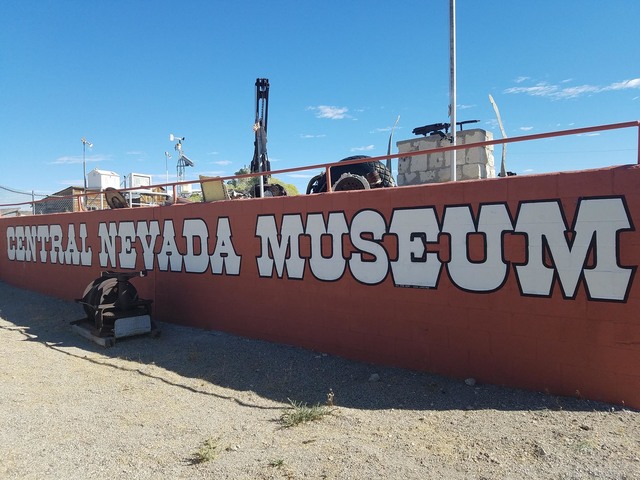 The Central Nevada Museum in Tonopah as shown in a photo earlier this year. As the result of budget issues, concerns are being raised about the museum’s future. David Jacobs/Times-Bonanza & Goldfield News

TONOPAH – Funding concerns are being expressed about the Central Nevada Museum’s future, prompting the museum to look at additional non-government funding options.

“We are applying and searching out grants to possibly keep it open,” said Allen Metscher, president of the Central Nevada Historical Society, which operates the museum in Tonopah. “But we can only do so much. What I’ve found in the searching for grants is that there are plenty available, but they are all for museum projects, not operation. That is an issue of its own.”

He indicated cuts could be felt soon at the museum located at 1900 Logan Field Road.

“It will be probably in February or January,” Metscher said. “That would be when the employee may be laid off.”

Metscher said he was “deeply concerned” about the prospect of the museum having to close.

“We are not sure on that,” he said when asked if the museum would remain open for at least a few more months in a worst-case scenario.

Metscher’s comments were made in response to emails from museum supporters to the Times-Bonanza, urging the newspaper to look into the situation.

Funding from Nye County is in place for the 2017 fiscal year. That totals $45,000, with the museum covering its own utility costs for more than a year, Metscher said.

Options for additional county funding are not in the immediate future.

Metscher spoke of the museum’s financial challenges in the context of other county issues such as Tonopah not having a hospital since Nye Regional Medical Center’s closure in August 2015.

“I do realize it’s very insignificant when the county hospital shuts down and other entities,” he said.

“I know that the county provides enough to keep one individual employed, but the county doesn’t provide the budget to operate the museum,” Nye County Commissioner Lorinda Wichman said. “We provide some funding, and it is funding that is not mandated by law.”

“As you know, going through the last few years with Nye County budget cycles, you have already seen where we have cut things like the animal shelter, the senior nutrition program and things like that because they are not state law,” Wichman said. “They don’t require the county to pay for those items.”

So far, the museum has been able to get some Nye County funding.

“But by all means, there is a threat,” Wichman said of future funding challenges. “As our revenue is reduced, and we have less and less revenue to work with, any service that is not mandated by state law is at risk.”

“As long as Nye County has diminishing revenues and continued budget challenges, there’s always a threat of any non-mandated service being cut,” she added.

Wichman urged that the museum issue be put in perspective.

“Right now our entire (county) emergency services is operating on what they can collect from the people who are using the services. It’s an enterprise fund. We are not supporting them hardly at all. And our emergency services is to the point now that all of our volunteers are just dropping like flies because they can’t do it without medical services and an emergency room in Tonopah.”

Those crews now have to take patients more than 100 miles away to the nearest hospitals, round-trips that take several hours and keep the volunteers away from their jobs, homes and families.

Wichman said she has “a personal passion for history and our museum.”

“My husband and I and a group of friends have been helping for several years to keep the old courthouse in Belmont intact, so it doesn’t deteriorate any longer. We have personally donated money and stuff to keep windows in it to keep the weather out. I was able to get the commissioners to use some of our capital funds to put a roof on it with the help of some grants.”

“My passion is in history and our museums, but when you stack that up against our emergency services or our senior nutrition program,” Wichman said, “I am very grateful that the museum has held together as long as it has from the county coffers, the monies that were sent to the museum from the county.”

“Reach into their pocketbook and make some contributions,” she responded. “They’re tax-deductible.”

Wichman said she understands the concerns of museum supporters.

“Those folks when they email me and say ‘Oh my God. How could you possibly let the museum go?’ My response is the taxpayers of Nye County would love us to be able to step up to the plate. But we are capped by the state. We can’t charge any more on our taxes… If you want that museum there, and you are that passionate about the museum, then step up with your checkbook and do something about it. Do some fundraising.”

Metscher spoke of the museum’s significance to Tonopah.

“The popularity of this museum, its value to Tonopah and all, too, is of prime importance to the town,” Metscher said. “After 35 years of operation, and three years named the Best Rural Museum in the state of Nevada, it would be sad to see it shut down.”

“Whatever happens in the future regarding the museum, the research library and exhibits will be kept together as one entity by the Central Nevada Historical Society,” Metscher added later via email. “For the last 35 years the museum has been utilized and enjoyed by researchers, history lovers and the general public from around the world.”