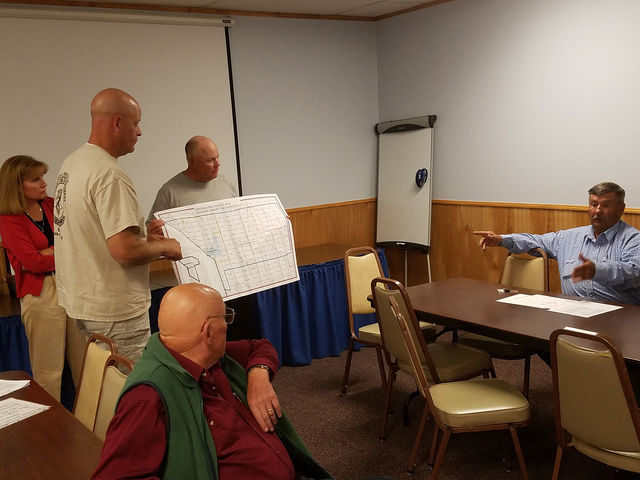 Longtime rancher Joe Fallini, seated at table on the right, of the Twin Springs Ranch, speaks to the Tonopah Town Board on Sept. 14. Fallini expressed concerns about open grazing through a proposed annexation by the town. A public hearing on the proposal is planned for Oct. 12. Shown standing by the map are Town Board Chairman Duane Downing and town officials Chris Mulkerns and Joe Westerlund. David Jacobs/Times-Bonanza & Goldfield News 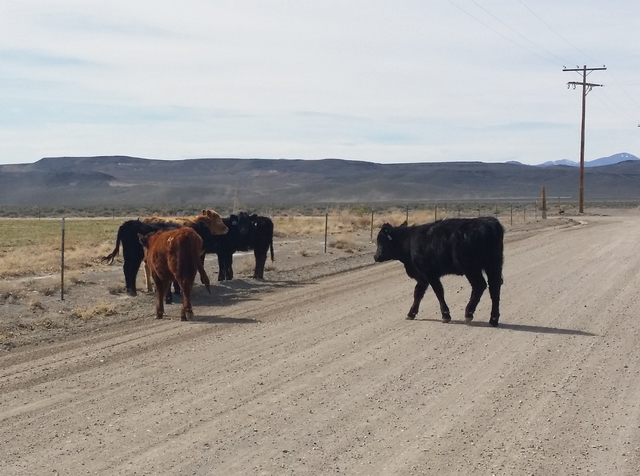 Cattle are shown on a road earlier this year in rural Nye County. Open grazing concerns are being raised as Tonopah considers an annexation proposal that would increase the town’s boundaries. David Jacobs/Times-Bonanza & Goldfield News

As Tonopah considers an annexation that would expand the town’s territory to more than eight times its current size, livestock grazing is a concern in the ranching community.

Joe Fallini of the Twins Springs Ranch expressed those concerns ahead of a planned Oct. 12 public hearing. The proposed expansion would see Tonopah grow from 67 square miles to about 583 square miles, the Nye County Assessor’s Office reports.

“I got real nervous because the town ordinances say that you can’t have open grazing,” Fallini said. “That would automatically put everybody out of business.”

Fallini, who said he is interested in anything involving livestock grazing, highlighted his concerns at a recent Tonopah Town Board meeting. “I’ve seen this happen before,” Fallini said, mentioning changes that start small.

“And it just keeps multiplying” and involves grabbing “a little bit and then a little bit more,” he said.

Different interpretations of existing grazing rules and other issues surfaced in a back-and-forth discussion between Fallini and town officials. “The town ordinance says you can’t have open range,” Fallini said. “You have to confine your cattle.”

By confining cattle “that takes away the grazing,” he said. “It prohibits anybody running any cattle.”

But members and staff said they were unaware of a town ordinance outlawing open grazing. Fallini, however, maintained his concerns that such as rule was on the books. He expressed a willingness to locate the paperwork supporting his understanding. Town officials did, however, point to two on the books.

One pertaining to Tonopah says, “No person shall keep any livestock on any parcel of land which is less than 10 acres in area, or within 250 feet of any residence other than his own, except within the Horseshoe Heights area. The (Town) Board reserves the right to exclude specific parcels by resolution duly made and passed.”

Horseshoe Heights is the area off U.S. Highway 6 in the vicinity of the Tonopah Rodeo Grounds and animal corral area.

Another Nye County ordinance, located after the Sept. 14 meeting, mentions that animals cannot run at large on public or private property.

More information could be presented during the upcoming public hearing set for 7:10 p.m., Oct. 12 in the large room of Tonopah Convention Center, 301 Brougher Ave.

Starting in July 2015, Tonopah gave up 20 cents per $100 of assessed property valuation for the hospital district, reducing overall funds available to the town for other items.

By expanding Tonopah’s footprint, the town is seeking to recoup those tax dollars, which earlier this year were calculated at $69,000 annually.

The majority of parcels in the current proposed annexation area are owned by the U.S. Bureau of Land Management, Tonopah Solar Energy LLC, Liberty Molly LLC, and patent mining claims among others, the assessor’s office said.

Officials stated that private property owners would not be affected by the annexation if it were to be approved.

Fallini, however, maintained his concerns.

“Whenever you put the restrictions on like the Tonopah ordinances where you can’t have grazing in the Tonopah area, that takes that area out of the grazing use,” he said. “That is the reason that I am here.”

“All around that area is grazing,” Fallini said after a large map was displayed, showing the proposed annexation area.

Town Board Chairman Duane Downing added, “There is nothing that says you can’t” have cattle graze.

“Nothing is going to change with grazing because it is currently here within this area already,” Downing said.

Fallini, however, said that by expanding town boundaries “you’ve got grazing in there.”

“That is what my problem is,” he said.

Seley said, “You have a good point, Joe. We need to make sure that we reconcile the part that would currently fall underneath that.”

Fallini responded, “If you guys put a stipulation in there that grazing is recognized, then I have no problem at all.”

Town board member Jerry Elliston said the action leading to the public hearing only marked a starting point.

“We’re just saying we want to start the process so we can define what we’re going to do, the legal language,” he said.

“We understand that because it’s your livelihood,” Kaminski said.

“I would not vote for anything that would impose on grazing rights,” Kaminski added.

Seley, a former official with the U.S. Bureau of Land Management, said, “I don’t want grazing rights taken. That’s part of the livelihood of this town.”

IN CASE YOU MISSED IT

In calculations provided to the Times-Bonanza, the Nye County Assessor’s Office said:

This proposed new area, the assessor’s office said, would extend from the current town of Tonopah boundaries: