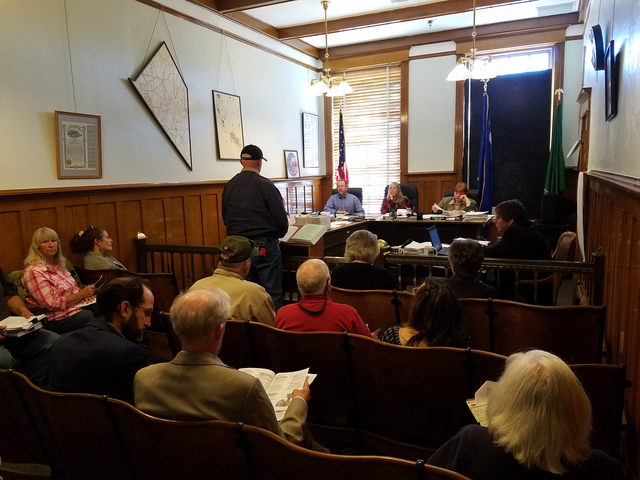 The Esmeralda County Commission meets as shown in this Oct. 4 photo in Goldfield. A draft of a bill establishing land uses and regulations for land development in Esmeralda County did not move forward. Widespread opposition was expressed by area residents. Nancy Boland, commission chairwoman, seated center at the long table, requested the agenda item to encourage public discussion about local government issues. The other commissioners shown in the photo are Ralph Keyes and Michelle Bates. David Jacobs/Times-Bonanza & Goldfield News

Depending on the point of view, a land-use draft plan that didn’t make it out of Esmeralda County Commission chambers marked a victory for small government advocates, a lost opportunity, a chance for community members to engage on the issue, or all of the above.

The draft, which eventually could have become a county ordinance, called for “establishing land uses and regulations for development” within the county.

Opposition was gathering strength prior to the Oct. 4 commission meeting in Goldfield.

The crowd, estimated by one person at around 70, vehemently opposed the agenda item, which never came to a vote.

The only commissioner to express any support for the agenda item was Nancy Boland, commission chairwoman.

“I wanted to have a sincere conversation about this whole land planning thing,” she said afterward. “That was part of it. I knew that wasn’t going to go anywhere when I put it on there (the agenda),” Boland said, describing the measure as only a draft. “I was not going to probably ever propose it …But I wanted to get them (residents) out there and have a talk.”

Bill Kirby, an Esmeralda County commissioner from 2002-2012, detailed the opposition to the plan.

“The main objection is that it intrudes into the freedom of people to use their property the way they see fit without the government intruding,” he said in summarizing those opposing views. “The way that it was set up is that if somebody saw something that was inconsistent with the new code requirements, that they could complain.”

“That complaint would go to the building and safety people, who would then come out and formalize the complaint and give people a certain amount of time to take care of the problem, or they could be subject to civil penalties and could be subject to a fine of up to $1,000 or up to six months in jail for not complying with the requirement to take care of the so-called nuisance,” Kirby added.

He counted the proposed draft at 204 pages, a document that mentions creating land use districts, development standards and administrative procedures.

Kirby, of Fish Lake Valley, also had concerns about unknown costs to put the plan in place through a potential additional department of county government. Those could include items such as costs for additional government employees, vehicles and equipment.

“They want to stay in the 19th century,” he said. “They don’t want to be brought into the 21st century.”

Kirby described a potential government expansion as not needed.

“Most of the people feel that we have laws in place that cover the real big problems,” Kirby said. He mentioned the U.S. Bureau of Land Management looking out for “health and welfare” on federal land, citing a figure that 96 percent of property in the county is federal land.

“The Bureau of Land Management already has the federal EPA and other regulations that protect people who live adjacent to the BLM for their safety and welfare,” Kirby said.

Kirby also noted the county’s separate, newly updated master plan that he worked on as a county commissioner, efforts that continued after he left office.

That plan is described as in line with the small government approach for the county known for its historic features and heritage.

“The master plan was designed to meet only the minimum state requirements and use the ‘Code of the West,’” Kirby said. “Meaning that we’re still the Wild West, and we’re not interested in having all these regulations that are extended by a big-city mentality to a place that doesn’t require them.”

Kirby said that under the updated master plan “the Code of the West was used, and we only met the very minimum requirements of the state of Nevada to have that plan in place. So we would be compliant with the state law and only as compliant as we had to be.”

Boland, a commissioner for nearly 12 years, expressed a desire in getting people more involved with their government. She cited a concern that “our people are really apathetic,” including on federal land issues.

“We don’t see people at our commission meetings,” she said. “Sometimes, I don’t think they understand just how welcome their input is.”

“I wanted to solicit the public comment on these things, and so we did listen to that,” Boland said of the land-use agenda item. “Everybody who wanted to speak got to speak. But I think it’s a very important thing that they showed up, expressed their viewpoints and also learned a little bit about what Esmeralda County is currently doing on these projects. Most of them don’t know.”

She emphasized that she was only trying to promote a discussion.

“I wasn’t so dead serious about getting the thing passed because it was way too comprehensive to do that, but it certainly got people thinking,” Boland said. “Some of them actually said that they might be willing to talk about certain components of it in the future, when we got done with the public comment…”

Boland indicated that, in turn, could prompt a local committee to eventually offer consideration. “They may want to go forward with certain things like special use permits.”