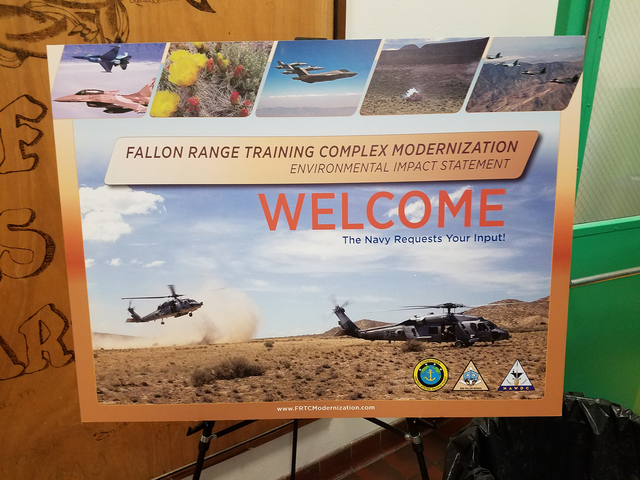 An informational graphic is displayed in Gabbs on Oct. 7 for a public meeting on the proposed expansion of the Navy’s Fallon Range Training Complex, which would include Nye County. As part of the proposal, the Navy seeks to add 604,789 acres of additional public land and acquire 65,160 acres of non-federal land for training. The training complex currently includes 202,859 of public land. David Jacobs/Times-Bonanza & Goldfield News

GABBS — As the Navy pushes for more than tripling its Fallon Range Training Complex into Nye County, regional residents are offering mixed views, including concerns over the economy and access to public lands.

“I support the Navy,” lifelong Gabbs resident James McKinnon said. “I think it’s going to take a lot away from the hunters, the outdoorsmen, the rock hounds (collectors), those type of people.”

“I think they’re asking for too much, but at the same time I understand that they have training that they have to do,” McKinnon said. “But there’s got to be a compromise where they don’t take away everything.”

The Navy seeks to renew its existing arrangement for 202,859 acres in addition to seeking for military use another 604,789 acres of public land to expand the existing range. The Navy also seeks to acquire another 65,160 acres of non-federal land.

The Navy proposal is separate and unrelated to an Air Force plan to expand the Nevada Test and Training Range by more than 300,000 acres of public land elsewhere in the state, including Nye County.

Speaking of the Navy proposal prior to an Oct. 7 public meeting, McKinnon said the outdoor enthusiasts who currently use the public land help the Gabbs economy.

“They come in, they get fuel,” he said. “They stop at the local store. If they take away all that area, that cuts down on the amount of (hunting) tags that are given out there. They won’t be coming into town, so that eliminates that money there.”

Steven Smith, with residences in Gabbs and Silver Springs in Lyon County, said that as a result of the Navy’s plan, he’s started a petition on Facebook.

“That is a very massive chunk of American soil,” Smith, a prospector/elemental engineer, said of the Navy’s proposed expansion.

“What upsets me on it is the military already owns a lot of ground in Nevada. I’m not understanding why they need more. If our technology is advancing, they would need less. A lot of things don’t add up to me.”

“My biggest concern, my biggest issue with all of it is no longer being able to set foot on a large amount of American soil being an American citizen,” Smith said. “I do not agree with that. I understand if we need it for war. If we are at war, I’m fine with it, but we’re not.”

In seeking more land, the Navy says technology and changes in combat tactics mean pilots need additional space for “dynamic training” so they are fully ready when they’re called to action.

The Navy remains a key part of active U.S. military operations around the world, including in Iraq and Afghanistan. In Iraq this year, 12 U.S. military members have been killed, according to the icasualties.org website. In Iraq, another nine U.S. service members have died this year.

“It’s the whole backyard of Gabbs, if they actually do this,” Smith said. “You have kids who were walking on these hills when they were (small), and in 2020, they’re going to be told they can’t do it anymore.”

In summarizing the petition effort, Smith said the petition says, “Please leave our public grounds alone …We do not wish to be restricted to access to American soil.”

“We get to see more airshows,” he said referring to Navy fighter-jet training. “In addition, it is very comforting to look up and know that they’re ours (American). We don’t have to worry about who they belong to. That’s huge.”

“We’re getting more and more important in this world we live in,” Higbee said of Gabbs.

■ A decision on the Navy’s expansion proposal is not expected until around 2021, pending actions such as an environmental review, review of public comments, further public meetings and congressional action.

■ See the Tonopah Times-Bonanza & Goldfield News for an upcoming stories, looking at what the Navy is saying about environmental concerns and land issues that could affect ranching and more.

■ See the Facebook page of the Times-Bonanza for more photos from the Navy’s plan presented in Gabbs.