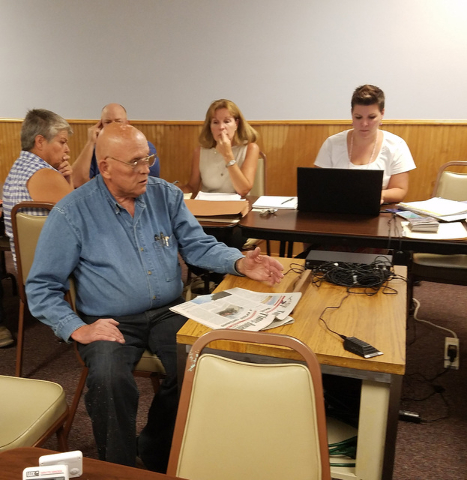 Horace Carlyle speaks to members of the Tonopah Town Board on Aug. 24 at the convention center. The town and Nye County are facing challenges to the ambulance service resulting from the closure of Nye Regional Medical Center in August 2015. David Jacobs/Times-Bonanza & Goldfield News

TONOPAH – Faced with no hospital and staffing/financial challenges with the ambulance service, the Tonopah Town Board soon could be taking a closer look at funding options.

The possible action is the result of a request by former Town Board member Horace Carlyle, citing “public health and safety” concerns.

Carlyle suggested that the town looks at the fire department budget as part of addressing EMT issues, including what Nye County describes as the small $50 stipend for its volunteer ambulance crew members.

“We have the ability to have local remedies in the short term that will save lives,” he told the town board at its most recent meeting Aug. 24.

“I believe that we need a town workshop where we look at alternatives,” Carlyle said, adding that Tonopah cannot wait for multiple other Nevada counties and the state Legislature “to come up with a solution.”

“What’s your liability?” Carlyle asked the board. “So I would try to save lives.”

“I think the town board, its first duty under the unincorporated Town Charter issued by Nye County, is that we have a fire department,” he told current board members. “We have to maintain and support that fire department, which includes EMTs, as well as firefighters.”

With the closure of Nye Regional Medical Center in August 2015, ambulance staff now take the ill and injured more than 100 miles away to the nearest hospitals in Bishop, California and Hawthorne in Nevada’s Mineral County.

The round-trips can keep the ambulance volunteers away from their homes, families and jobs for at least four to six hours at a time. That, combined with the low stipend, makes it difficult to retain ambulance staffers.

It’s not immediately clear what Tonopah’s options would be in terms of providing supplemental ambulance funding, how it would work if approved and the county’s role if Tonopah sought to act.

Town board member Janet Hatch asked the two other board members in attendance, Don Kaminski and Jerry Elliston, about the issue presented by Carlyle.

“I wanted to see how the board felt about increasing the compensation for those that are the EMTs, and is that something we determine,” said Hatch, also the board’s clerk.

Elliston, appointed to the town board Aug. 16, replied: “For me, it’s definitely an interest. I think it’s very valid. I think it’s one of the biggest issues we have in the town.”

“I would like to know more about this, and I would like to understand the issues a lot better and possible solutions and things we can do,” Elliston added. “I think it’s a very serious issue, and I’m willing to spend time on it.”

Kaminski said: “The bottom line is it’s not our ambulance service. It’s not our volunteers,” since the service is Nye County’s.

“Right now we have no hospital, no emergency room, nothing that we can take an ambulance call to, except for six hours away or eight hours away,” Kaminski said. “We have to rectify that problem first…”

He cited the need for a “facility that we can take a 911 call with the ambulance and bring it into our own town instead of transporting it six or eight hours away,” including the return trip to Tonopah.

Kaminski also suggested starting to work on some arrangement with other towns with hospitals, “where maybe they’ll come meet us halfway” — reducing Tonopah ambulance travel times.

“Because we’re killing our (ambulance) volunteers,” Kaminski said. “Everybody works, and they can’t afford to take off every time there’s a run, eight hours.”

“A lot of the companies they work for do not reimburse them for that,” he added. “So it’s going to start playing against their personal lives.”

Chris Mulkerns, Tonopah’s administrative manager, responded that the question should be an agenda item for a future town board meeting or be the subject of a public workshop so that “we can have an open discussion about it.”

“I’m just thinking that we should schedule something where we can sit down and try and come up with some things,” she said. “We can invite other people to the meeting who may be able to answer some of those questions.”

“I think it would be beneficial to try and get as many people there who can answer or give us some substantial information, not just us throwing out our wish lists and talking to each other about that,” Mulkerns said.

“We really need to have it be meaningful, have people there who can help us with it or give us some guidance with it,” she added.