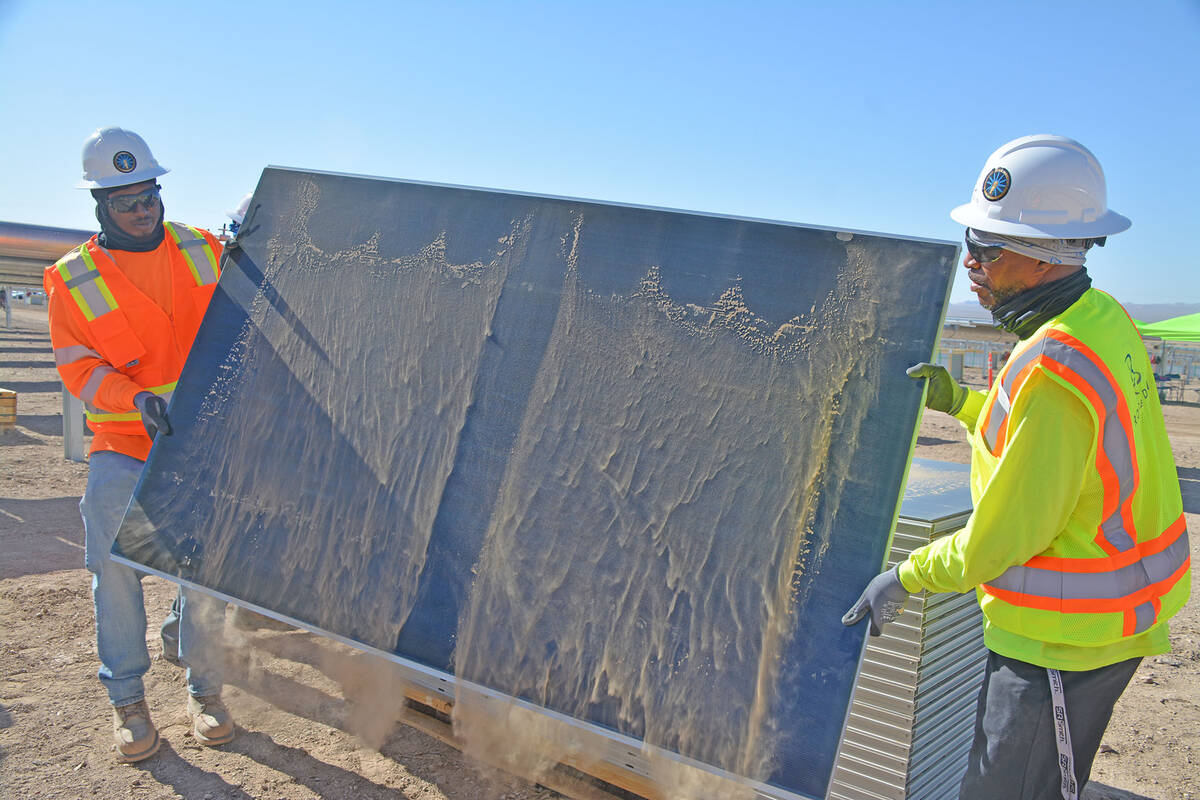 WASHINGTON — President Joe Biden invoked the Defense Production Act on Monday to bolster U.S. manufacturing of solar panels to protect clean energy projects and jobs in states including Nevada, where officials claimed the fledgling industry was threatened by tariffs and a trade investigation.

The White House announced a tariff waiver on solar components that are the subject of a Commerce Department investigation into illegal trade practices involving Chinese materials assembled in Asian countries to evade U.S. regulations.

Nevada Gov. Steve Sisolak, U.S. Sen. Jacky Rosen, D-Nev., and a bipartisan group of governors and lawmakers from Sunbelt states had complained directly to the White House that the Commerce Department probe had disrupted importation of components — halting local projects.

Commerce Secretary Gina Raimondo warned Congress against political pressure on the investigation by federal agencies, which are following strict statutes into determining whether trade dumping of Chinese goods through Malaysia, Thailand, Cambodia and Vietnam has occurred.

That investigation will continue, according to the administration.

But Biden also announced a tariff waiver on products from the four Asian countries under investigation, but not on China, due to U.S. concerns over forced labor involving Uyghurs and ethnic minorities.

The actions were taken to make available solar modules that are crucial to the installation of residential and commercial panels and protect the thousands of American jobs in the fledgling clean energy industry.

Rosen said in a statement that the “risk of additional tariffs on imported solar panels would have been devastating for American solar projects, the hundreds of thousands of jobs they support and the nation’s clean energy and climate goals.”

Nevada boasts that it is one of the fastest-growing producers of solar energy and an important ally in the Biden administration’s push to lessen the nation’s reliance on coal and other fossil fuels.

“Solar energy is the leading renewable energy resource in Nevada and many other states, and Nevada has the largest solar economy in the nation,” Sisolak said in a statement issued from his Carson City office.

A majority of the roughly 6,100 solar jobs in Nevada are in installation, distribution and maintenance, according to the Solar Energy Industries Association.

Rosen said the administration’s use of the Defense Production Act and the tariffs waiver “will save American solar jobs and invest in our long-term domestic solar manufacturing capabilities.”

A bipartisan group of senators and House members, including Rosen, U.S. Sen. Catherine Cortez Masto and Reps. Susie Lee, Steven Horsford and Dina Titus, all had urged the administration to take action after the Commerce Department investigation halted local projects.

Sisolak was one of 18 governors who asked the White House to act quickly.

Another bipartisan group of senators, however, had argued that the administration should follow through with the investigation and crack down on illegal trade practices designed to undercut U.S. development and manufacturing of solar cells and panels.

The investigation was launched in March after a complaint was filed by Auxin Solar, a San Jose, California-based manufacturer of solar panels.

Investigators have until Aug. 29 to determine if trade action is warranted.

But the probe immediately disrupted the supply of components.

Ulozas said the disruption has led to delays or cancellations of solar projects in the state, “including disrupting four of our projects totaling over 600 megawatts of low-cost solar power.”

As a result of the investigation, Rosen said 83 percent of domestic solar companies have been notified of canceled or delayed panel supply. Cutting off this supply could risk the loss of 100,000 jobs nationally, including 16,000 in domestic manufacturing.

The investigation also has blunted the Biden administration’s clean energy goals, which were promoted by Energy Secretary Jennifer Granholm during a recent stop in Las Vegas to highlight various projects.

Granholm told a Senate Energy and Natural Resources Committee in May that reaching the Biden administration goal of 100 percent clean energy by 2035 is at risk if the issue under investigation by the Commerce Department is not resolved quickly.

Tariffs on Chinese solar components were first imposed by the Trump administration in 2018 and later extended by the Biden administration over concerns of trade dumping that undercut the development of U.S. manufacturing of components.