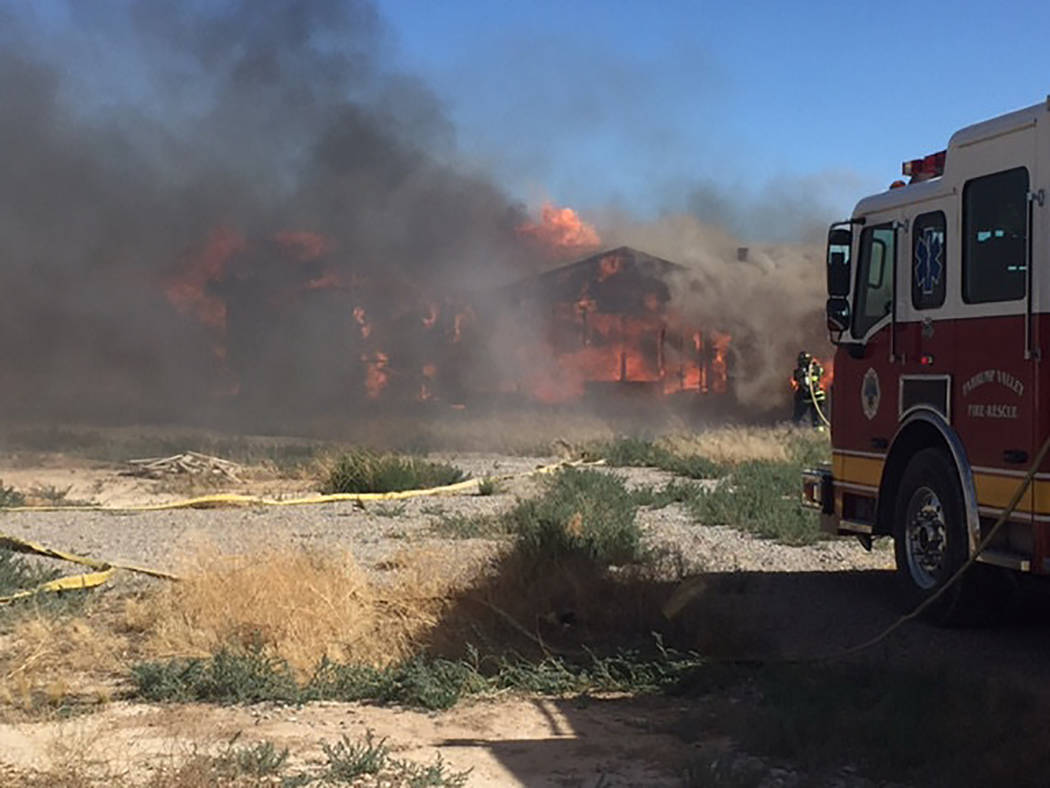 Special to the Pahrump Valley Times Arson is suspected in a fire which destroyed multiple structures along West Galley Road on May 24. No injuries were reported. Nye County sheriff’s detectives are investigating leads. 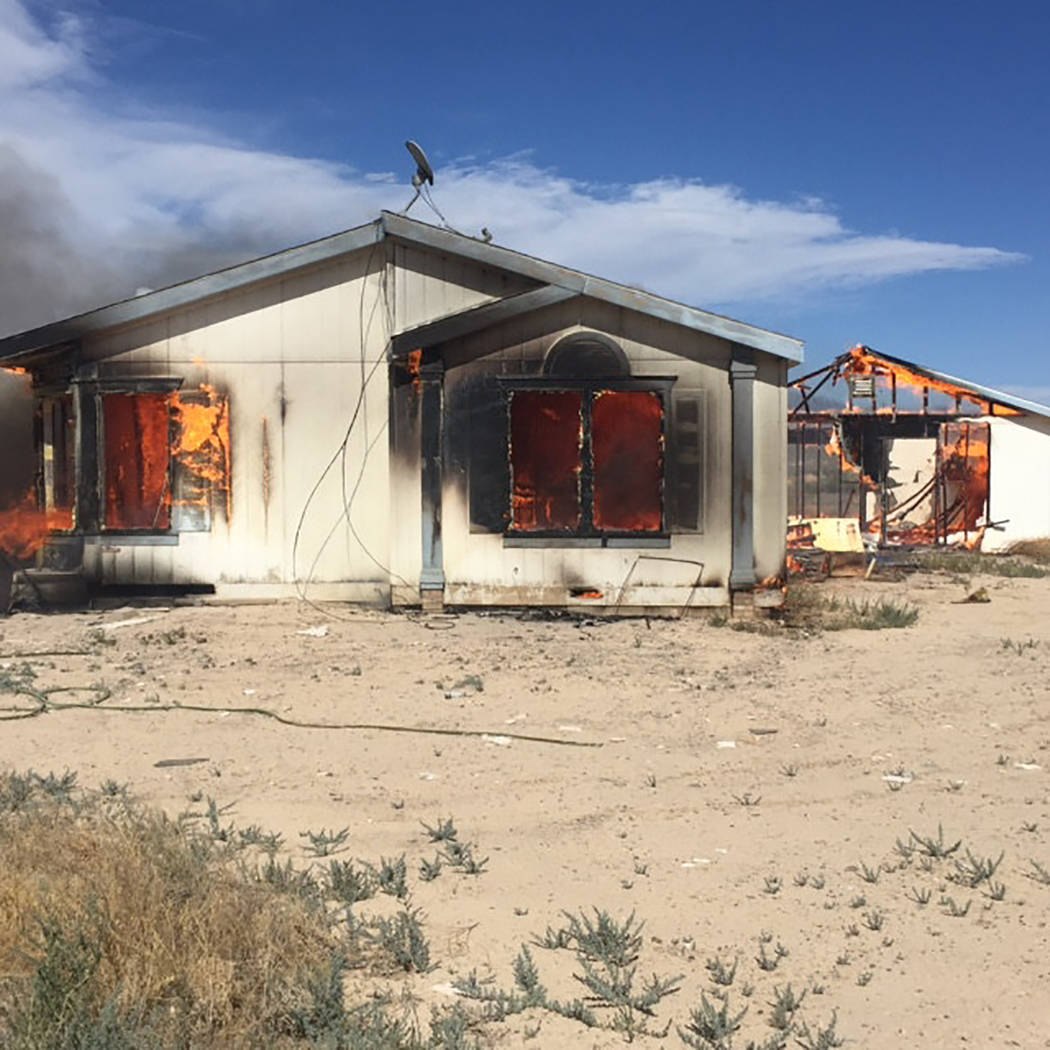 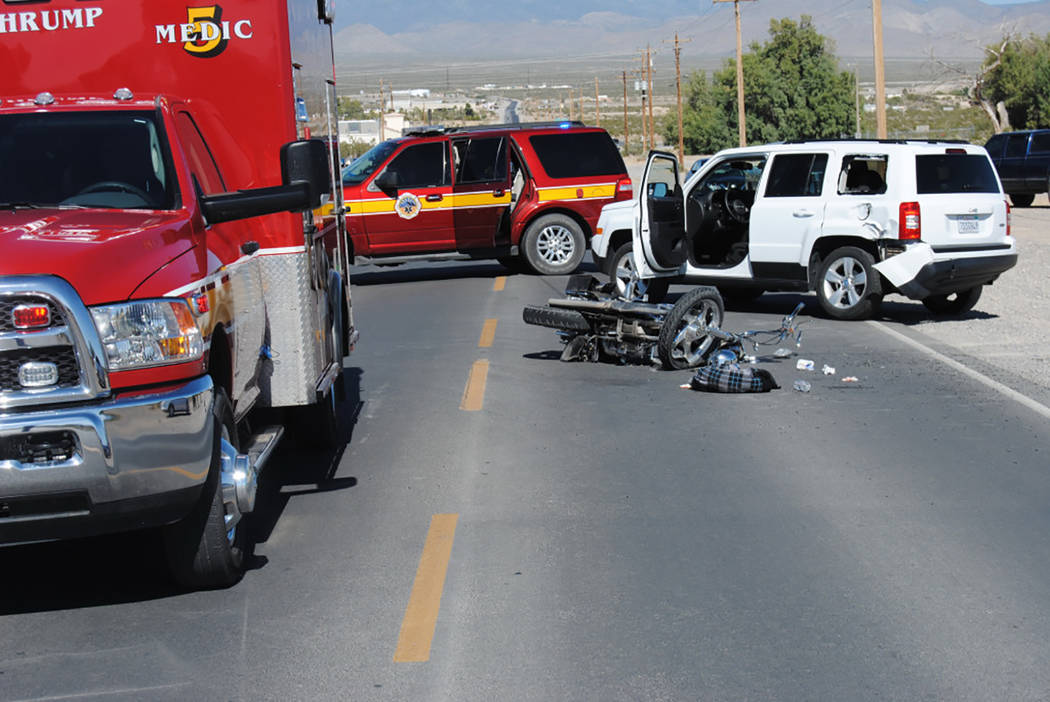 Special to the Pahrump Valley Times One person was transported to UMC Trauma following a two-vehicle collision involving a motorcycle at East Mesquite Road and Chiquita Lane on Friday. That patient was flown from the scene by Mercy Air.

A man is dead following an off-road vehicle accident on Sunday just after 6 a.m.

Pahrump Valley Fire and Rescue Chief Scott Lewis said fire crews were dispatched for a mutual aid assignment to the area of the Amargosa Dunes.

“Upon arrival, we found that the rider was deep within the dunes which required our off-road vehicles to access that patient,” Lewis said. “It was very loose sand and very dicey conditions as far as getting to where the patient was located.”

While responding, Lewis said crews were notified that the injuries sustained were very critical in nature.

“We placed Mercy Air on the assignment, so as we were responding, Mercy Air was responding at the same time,” Lewis said. “Mercy Air 21 landed in the general area where we transported the patient, however, that patient sustained fatal injuries.”

The name of the victim has not been identified.

A series of suspicious brush and structure fires also challenged local first responders during the past week.

On Wednesday, May 24, crews were dispatched for a report of a brush fire just before 4 p.m., in the area of Glencove Avenue and Capa Lane, where upon arrival, firefighters were met with an approximate one-acre ground-cover fire.

“The fire was in proximity to two residential structures,” Lewis said. “The fire was contained without incident and subsequently controlled with no extension. The fire was determined to be intentional in nature. A suspect was developed while on scene and that suspect was arrested and placed into the care and custody of the juvenile probation office. The suspect was approximately 11 years old.”

Roughly 24 hours later on Thursday, fire crews were dispatched for a report of a structure fire along West Galley Road, just west of Leslie Street.

“Crews were able to control the fire within about 30 minutes after arrival, however, we were also challenged by gusting winds, dry materials and additional vacant structures filled with discarded materials,” he said. “That fire is suspect in nature and a suspect has been developed. The sheriff’s office is investigating. There were no injuries.”

On Friday, May at approximately 10 a.m. fire crews were dispatched for a brush fire in the area of Linda and Iron streets.

“Upon arrival, we found a ground-cover fire alongside the roadway and that fire was quickly contained with no extension,” Lewis said. “The investigation developed two suspects that were in the area immediately preceding the fire.”

“It was determined that the two individuals, ages were approximately 10 and 13 years old, were responsible for starting that fire,” Lewis said. “They were arrested and placed into the care and custody of the Nye County Juvenile Probation Office. There were three fires within 36 hours last week.”

Hours later, fire crews were dispatched to the area of East Mesquite Road and Chiquita Lane for a report of a two-vehicle collision just before 4 p.m.

“Upon arrival, we found a motorcycle versus an SUV,” Lewis said. “There was significant damage to both vehicles where the motorcycle rider remained on the ground. A quick assessment revealed the rider sustained injuries consistent with a trauma center.”

Lewis noted that Mercy Air 21 was brought to the scene where a landing zone was established on Mesquite Road.

“Patient care was transferred to Mercy Air and that patient was flown to UMC Trauma in Las Vegas,” Lewis said.

Also on Friday fire crews were dispatched for a mutual aid assignment in Clark County just before 7 p.m.

“It was an off-road accident near where the Wheeler Pass Kilns are located,” Lewis said. “Crews responded with our off-road vehicles where they found the accident in the general vicinity as described.”

On Tuesday, crews were dispatched to the area of Barney Street just north of Mesquite Avenue for a rollover accident.

“Upon arrival, we found a vehicle had apparently barrel-rolled several times where it took out a tree and ended up landing upright in a mesquite grove,” Lewis said. Crews checked the vehicle and found that it was unoccupied.

Concerning the mechanism of the accident, Lewis said crews completed a search of the area to make sure there was no ejection, but found no evidence.

“Approximately 15 minutes after our arrival, another vehicle pulled up to the scene, at which time the driver of the rollover exited that vehicle,” Lewis said. “While that patient was scraped up, they decided to decline medical treatment.”