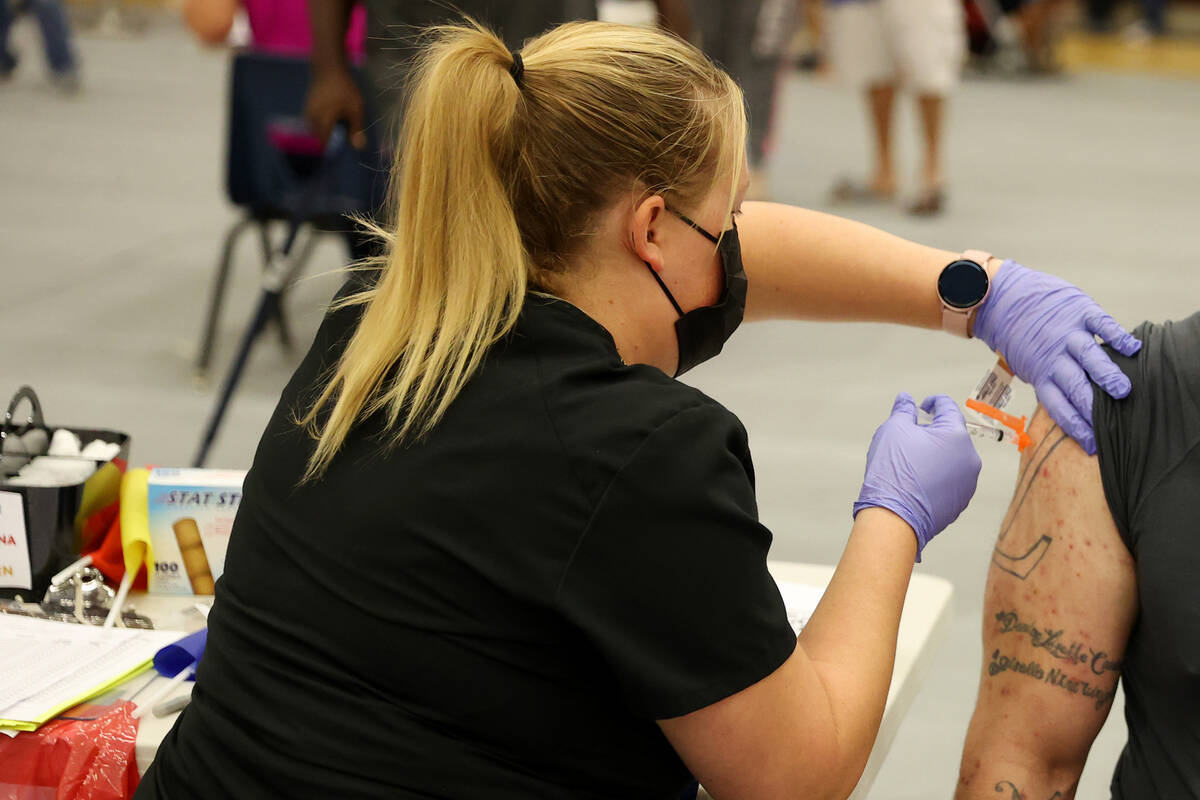 The Biden administration is expected as soon as this week to authorize a fourth dose of either the Pfizer or Moderna COVID-19 vaccine to people ages 50 and older, according to reports published over the weekend. In this file photo from Sept. 18, 2021, Steve Cancino, right, receives his second dose of the Moderna COVID-19 vaccine from registered nurse Jessica Johnson during a pop-up vaccination clinic. (Erik Verduzco / Las Vegas Review-Journal) @Erik_Verduzco

The Biden administration is expected as soon as this week to authorize a fourth dose of either the Pfizer or Moderna COVID-19 vaccine to people ages 50 and older, according to reports published over the weekend.

The move is driven by fear that there could be another surge of disease in the next few months and a desire to get out in front of it, according to a Washington Post story citing anonymous administration officials. The backdrop is that that the BA.2 variant currently is causing an uptick in cases in Europe, where some countries already have authorized a fourth dose. In the U.S., as in Europe, some protection from a first booster has begun to wane in many people.

However, two advisors to federal regulatory agencies told the Review-Journal on Monday they believe such a move would be premature.

“Where’s the evidence that that recommendation is supported by the science?” said Dr. Paul Offit, a member of a vaccination advisory committee to the Food and Drug Administration.

“We talk endlessly about how we want to follow the science, but I feel like here the recommendations sometimes precede the science,” said Offit, director of the Vaccine Education Center at Children’s Hospital of Philadelphia.

Dr. William Schaffner, a non-voting member of a vaccination advisory committee to the Centers for Disease Control, said he will be concerned if the administration makes a recommendation without public debate or input from his committee. The committee is not scheduled to meet on the issue.

If steps are cut from the process, what will be lost are “transparency and careful consideration,” Schaffner said.

Currently, the CDC recommends a fourth shot only for those with compromised immune systems, such as organ transplant recipients taking immune-suppressing drugs. For immunocompromised individuals, the initial shots may not have stimulated an adequate immune response.

Other countries already give fourth shots

Other countries already are moving forward with a fourth dose for larger swaths of their populations.

Israel has been giving a fourth shot for several months. The U.K. has begun administering a fourth dose to those 75 and up, and Germany to those over 70.

A study by scientists in Israel that has not yet been peer reviewed found that after a fourth dose, the rate of infection was two times lower and the rate of severe disease was four times lower in those 60 and older, according to epidemiologist and biostatistician Dr. Katelyn Jetelina.

“A fourth booster had a meaningful impact for older adults,” Jetelina, an assistant professor at the University of Texas Health Science Center at Houston, wrote last week in her newsletter, “Your Local Epidemiologist.”

However, both Offit and Schaffner said that most evidence suggests that one booster continues to adequately protect against serious disease, which is the goal of vaccination.

“If the goal is to protect against … all symptomatic illness, then we’re going to be boosting frequently, which is not a reasonable public health strategy,” Offit said

“That’s it, you’ll buy three months of protection” with a second booster, he said. “I think people need to understand that.”

Whatever evidence there is for a fourth shot, Schaffner believes the American public ought to get a chance to hear it.

“One of the wonderful things about the ACIP is that the meetings are completely transparent,” Schaffner said. “Any person in the United States can tune in on their computer, watch them in real time, see the discussion, see the data being presented and understand how the recommendations are made.”

According to the Washington Post, Biden administration officials believe that offering a second booster to those over 50 is an incremental change that doesn’t need to go before advisory committees.

“This is not a trivial decision,” Schaffner said. “And I think it deserves careful discussion.”

Offit believes that there may be a misconception that “it’s OK to get as many boosters as you want.”

However, there is always the risk of the side effects associated with the immune response, such as fever and headache, and also of diminishing returns. It is even possible that the body will lock into its response to the virus and respond less effectively when a new strain appears, he said.

Schaffner said that concerns about a new and dangerous variant of the coronavirus emerging and causing a new surge are valid.

But if a new variant appears that is “very serious and very contagious and could evade the protection of our vaccines,” the move ought to be “development of a new vaccine, not a fourth dose of what we’ve got,” he said.