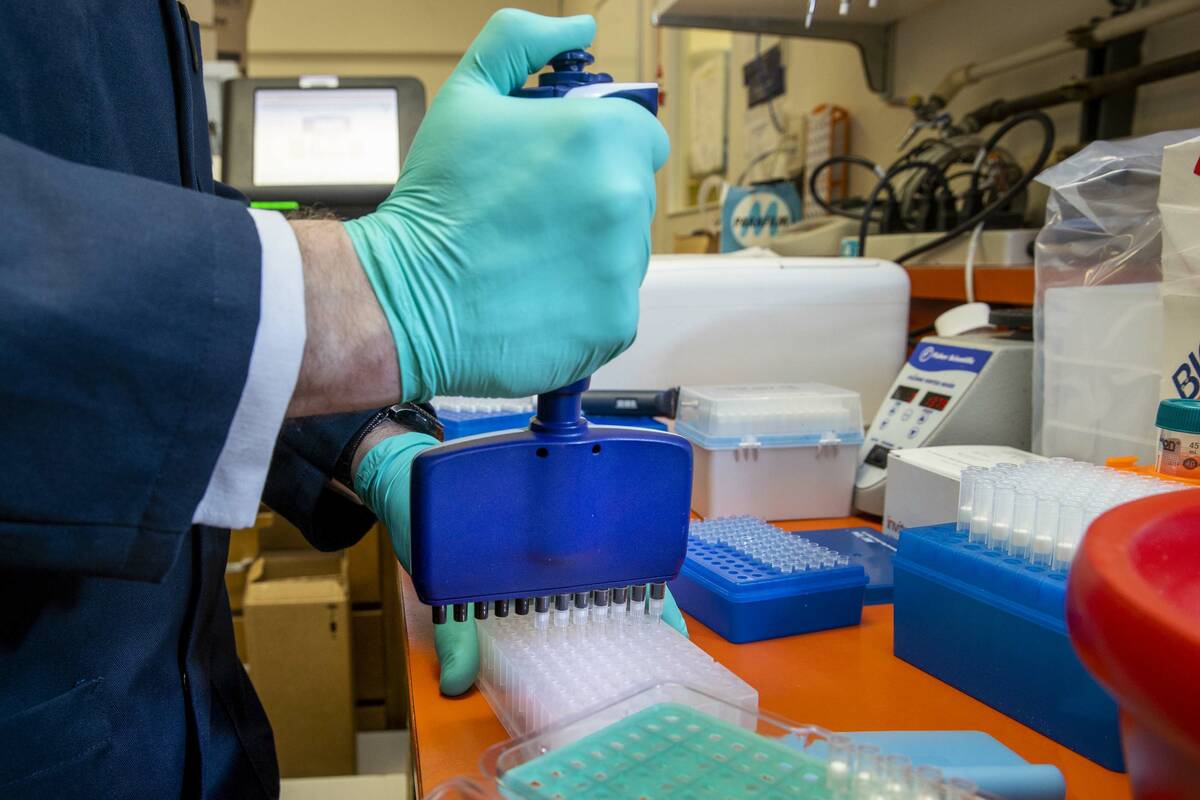 Dr. Andrew Gorzalski of the Nevada State Public Health Lab prepares a library for genomic sequencing in their lab based out of UNR School of Medicine on Thursday, April 8, 2021 in Reno. (L.E. Baskow/Las Vegas Review-Journal) @Left_Eye_Images

Scientists see little evidence so far that Nevada will face a surge in COVID-19 cases from the BA.2 coronavirus variant that is causing cases to rise in Europe.

BA.2’s presence in Southern Nevada has increased since the variant of concern was first detected here two months ago, yet overall levels of the coronavirus remain low, according to a UNLV scientist who monitors wastewater for early indications of disease spread.

Coronavirus levels in wastewater are low across both urban and rural Southern Nevada, said Edwin Oh, an associate professor of neurogenetics at UNLV.

“This is a fantastic thing,” and corresponds with the low number of COVID-19 infections in the community, Oh said in an email.

Yet this trend could begin to change at any time. “Given what we are observing in Europe now, we are definitely monitoring the viral levels closely,” he said.

Scientists such as Oh analyze levels and strains of coronavirus that have passed through the body into sewage. This analysis allows them to detect disease trends sometimes as much as weeks before patterns can be discerned from testing individuals for COVID-19.

Dr. Anthony Fauci said Sunday on ABC’s “This Week” that he expects to see an uptick in cases in the U.S. from BA.2 similar to Europe’s, but not a surge. Like the U.K. and other countries seeing an uptick, the U.S. is experiencing waning immunity against the virus as well as the loosening of pandemic restrictions, he said.

BA.2 spreads more easily than omicron, and as a result has become the most prevalent strain globally, said Fauci, White House chief medical advisor. However, he said it does not appear to cause more severe illness than omicron, which was characterized by generally milder illness than the delta variant that triggered the summer surge.

Levels of coronavirus also remain low in wastewater from Northern Nevada analyzed by the Nevada State Public Health Laboratory. They have dropped to their lowest levels since September, when the lab began its analysis of wastewater, said lab molecular supervisor Andrew Gorzalski.

Throughout the pandemic, the state public health lab, located at University of Nevada, Reno, also has genetically analyzed a sampling of Nevada’s positive COVID-19 test results.

Of Nevada samples sequenced by the lab or reported to it by public and private labs, about 2.5 percent in the past 30 days have been the BA.2 variant, Gorzalski said.

Last week, BA.2 represented about 35 percent of cases genetically analyzed in the U.S. according to the Centers for Disease Control and Prevention. A map on the CDC website shows that the prevalence of BA.2 is higher in the northeast region of the country. Regions have been hit by the virus with varying degrees of severity at different times.

Although BA.2’s prevalence in the U.S. has been increasing, “It has not risen to prominence as quickly as countries in Europe and Asia,” CDC representative Jasmine Reed said in an email.

Watching out for ‘deltacron’

Nevada authorities expressed relief that BA.2 also is not behaving like either delta or omicron, whose presence in the state quickly resulted in a surge of cases.

“At this current pace, I don’t see a surge in cases just based on BA.2,” said Gorzalski, who couched his comments as being his opinions and not the lab’s.

Nevada hasn’t seen an increase in cases despite a loosening of restrictions, he noted, including the lifting of an indoor mask mandate on Feb. 10.

“I don’t think BA.2 is the next variant we should be worrying about,” he said.

The pattern of BA.2 in Southern Nevada is “clearly different” than that of omicron, which caused a rapid surge of cases in December and January, said Oh, the UNLV scientist.

Despite BA.2’s growing prevalence, “The fact that we are not seeing this translate to more infections could be due to immunity from the recent BA.1 (omicron) infections, recent vaccinations, and/or lifestyles of those who have been infected,” he said.

Much of the local population is currently immune to the coronavirus, in part due to the high number of infections occurring this winter during the omicron wave, said Brian Labus, an epidemiologist and assistant professor at UNLV’s School of Public Health.

The omicron surge peaked in Nevada in mid-January. This means that a sizable percentage of the population will have natural immunity from infection at least through the middle of April, he said.

“For the next couple of weeks, things look great,” Labus said. “We’re seeing low numbers, (and) we haven’t seen any indicators that things are moving in a bad direction. So for the near future, we’re in a good place.”

He believes it is inevitable, however, that Nevada and the U.S. eventually will see another spike in cases, but not necessarily another major surge, as new variants appear. “Hopefully, we won’t see them take off because of this combination of natural immunity and people who are vaccinated.”

Like all viruses, the coronavirus is constantly mutating into new variants, many of which are not of concern. One new variant attracting some attention is so-called “deltacron,” a cross between delta and omicron.

This variant is rare, isn’t spreading significantly and has not been spotted in Nevada, Gorzalski said.

But the lab continues its genetic analysis so that if “deltacron” or another new variant appears in Nevada, “we are monitoring it and can get on top of it,” he said.