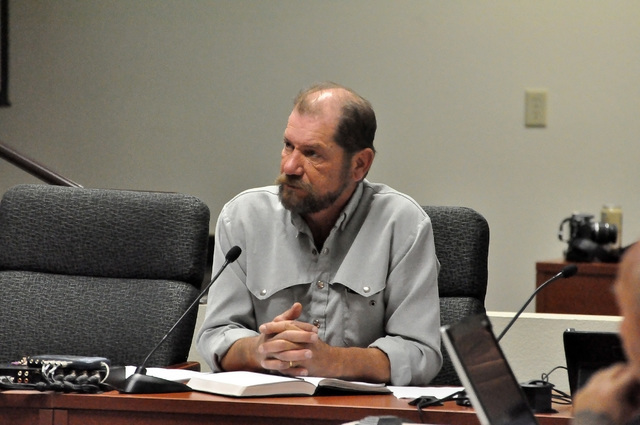 Officials are looking for a permanent replacement after the districts general manager, Darrell Lacy, submitted a 90-day resignation notice at the July 12 Nye County Water District Governing Board meeting.

I have been doing six jobs for the last several years, this was supposed to be temporary and it was finally time to get things working more toward a permanent solution and organizational structure, Lacy told the Pahrump Valley Times. Now I am down to five but I expect more changes in the coming months.

Officials will discuss Wichmans responsibilities and salary at the boards next meeting.

Wichman said that he doesnt want to fill the position permanently and said officials should look for a replacement in Pahrump.

I will do what it takes to get us through to the point if you got a GM. But, frankly stated, I dont think that Im the right man for the job, Wichman said.

Because of interplay within different agencies and the length of time that officials have been dealing with issues in the district, they said it would take two to three years before a new person would be up to speed to fulfill the obligations of the general manager.

Water issues are complicated. They have a lot of interactions both statutorily, court case history, as well as practical operations and coordination with other agencies, utilities as well as the county. Its not an easy situation, Lacy said.

And to hire a GM and to expect him to snap his fingers or twinkle his nose and get up to speed in six months, frankly stated, is a fantasy, Wichman said.

The Nye County Water District Governing Board acts as a stand-alone unit of local government and the general manager runs its day-to-day operations.

Nye County staff assistance for the past fiscal year included Lacy, geoscience Manager Levi Kryder, who departed in 2015 and geoscientist John Klenke. Lacy said his salary as a general manager was approximately $50,000.

Darrell has got a background in law. Being a lawyer and a chemical engineer, if you take those out of the equation, we are going to have to pay somebody else to give us support in those areas, Hall said.

Right now, as far as I know, we are about the most underfunded water district in the state of Nevada and probably would be hard-pressed to find one thats working on less of a budget than we are for the size of area that we cover and all the issues and all of the diversity between Pahrump, Beatty, Amargosa and Tonopah that we deal with, Hall said. So, its just a lot of stuff out here thats a lot different than a lot of other people have to deal with and its going to be really tough.