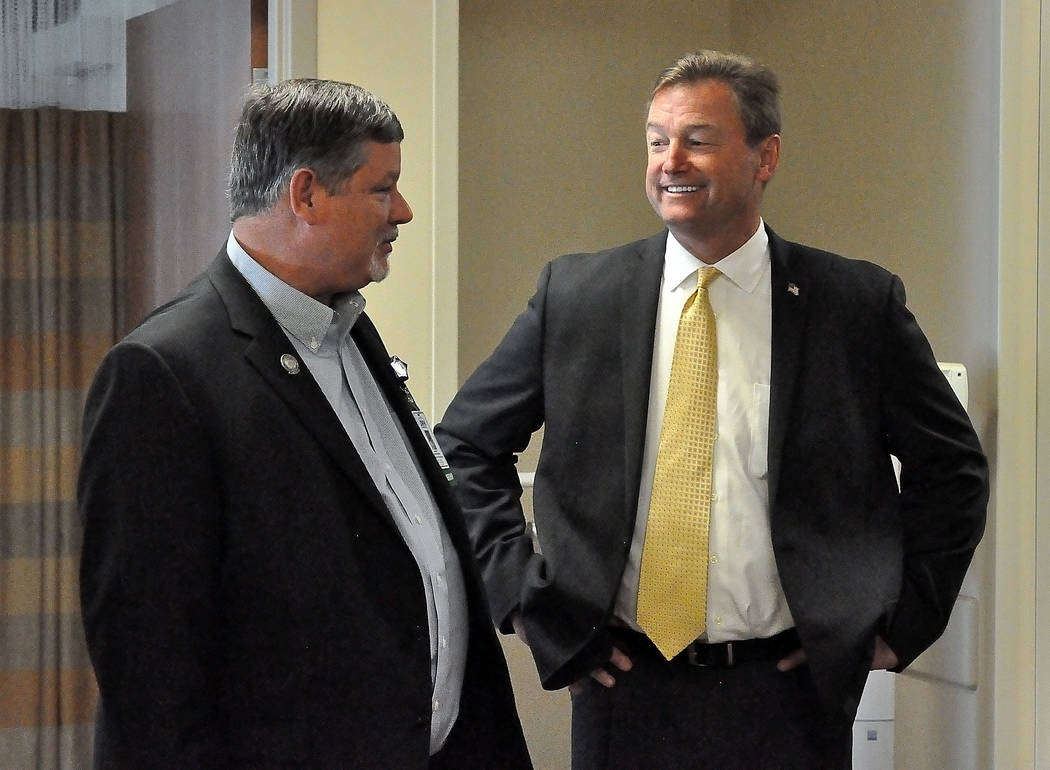 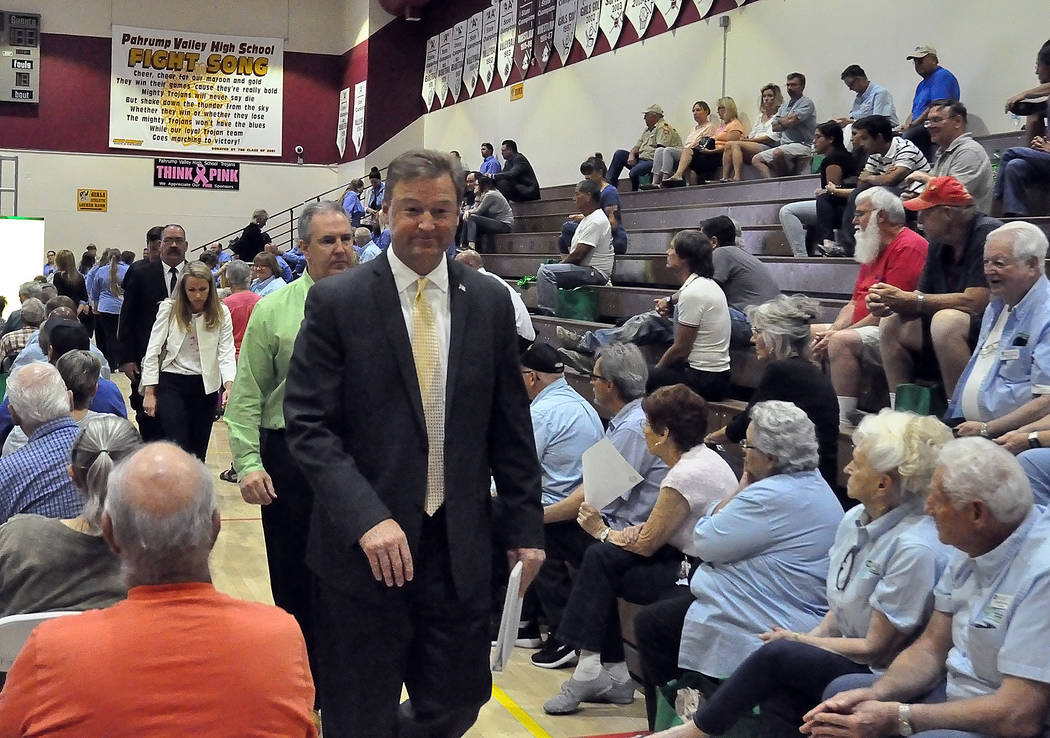 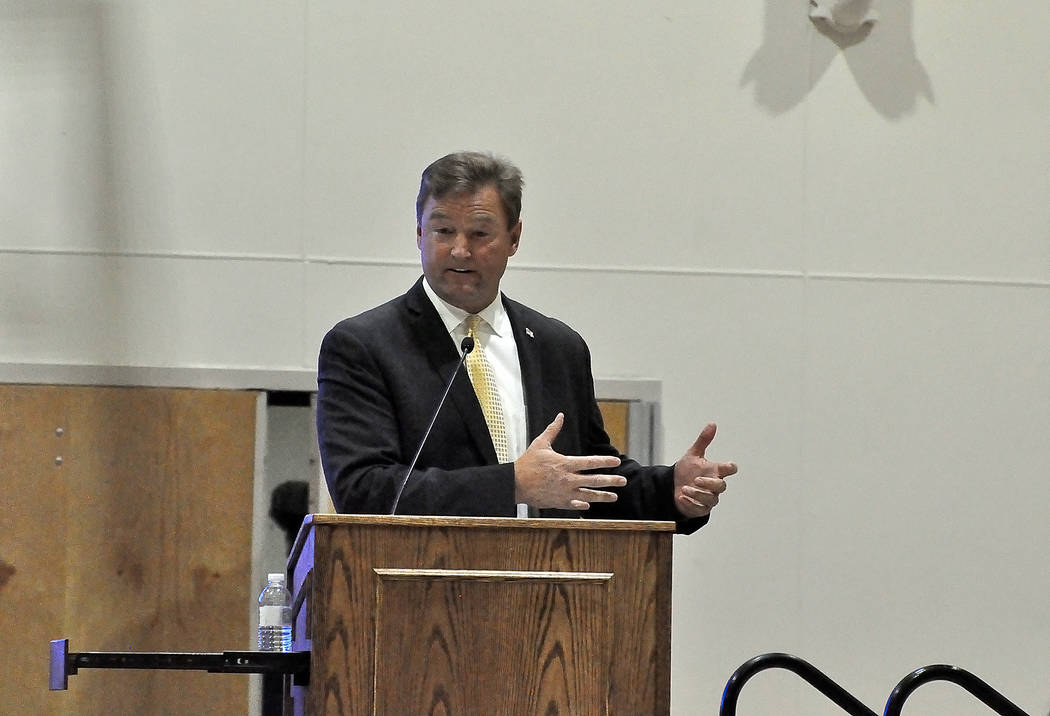 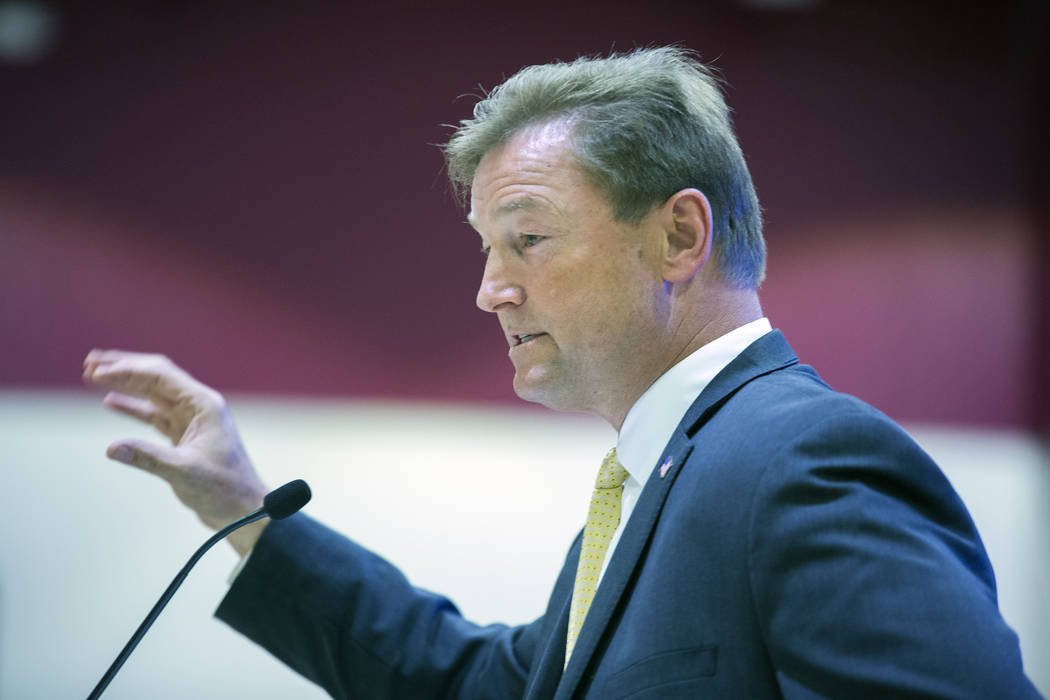 Special to the Pahrump Valley Times Sen. Dean Heller speaking at the VEA meeting on Saturday. 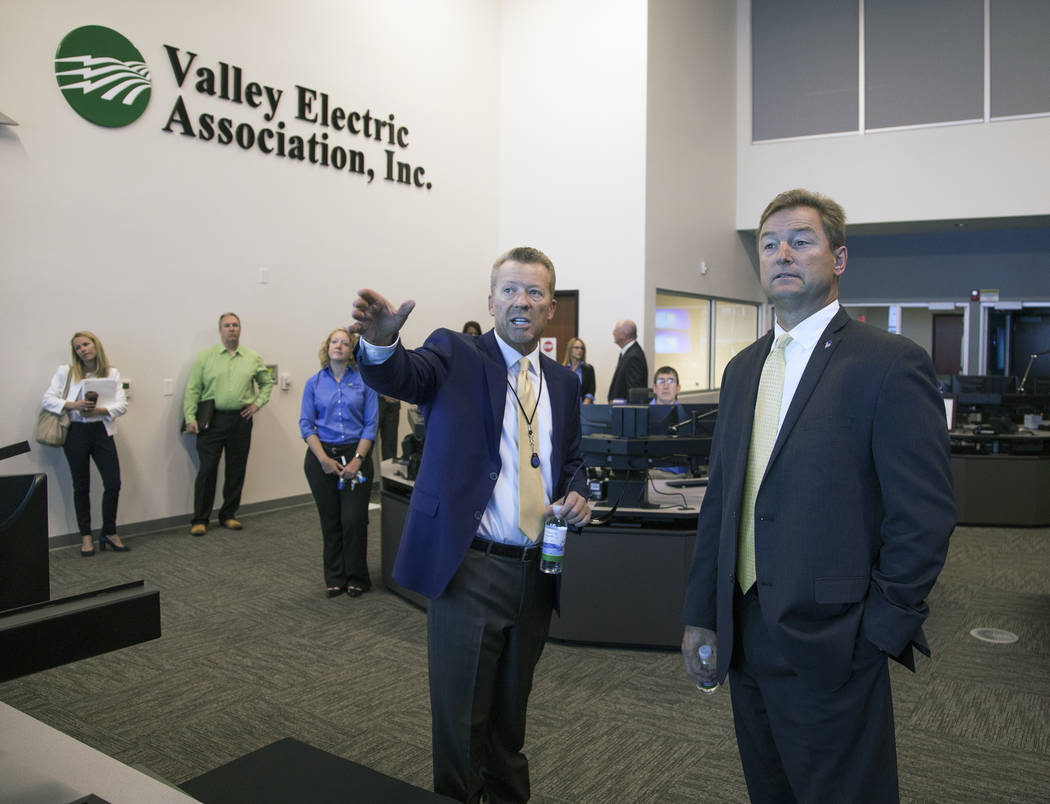 The evolution of the Valley Electric Association, Inc. and the question of how the co-op will meet its members’ changing needs took the center stage at its annual meeting on Saturday.

In his address, CEO Tom Husted said that 2016 was an extraordinary year for the Pahrump-based co-op.

“We owe the success of 2016 to our directors, employers, ambassadors, our members, active, past and present,” Husted told the crowd at the Pahrump Valley High School.

He compared the VEA to a young child, that can “be anything it wants to be.”

“Fifty-two years ago, this young company was asked, ‘What do you want to be?’ At that particular time, Valley Electric just wanted to to be a distribution electric cooperative,” he said.

From powering the communities more than half-a-century ago, the company is embarking on a multi-faceted journey, Husted said.

“Technology is forcing exciting changes inside the industry and outside of our industry. The cost of current distributed generation is coming down dramatically,” Husted said.

In addition, Husted said the company is looking at changes in its consumers.

“The consumer of today and tomorrow, they want flexibility. They want choice and flexibility,” he said.

Although the economics change, the co-op sees its consumers put in a lot of solar power backed up with batteries, wind generators and other gadgets, which changes how the utility operates.

“We have a company that we are setting a stage for with the consumer that is rapidly changing, a big cross-representation of choice, flexibility, affordability,” Husted said. “As a company, that’s what we have to prepare for. And when do we start preparing for that?”

A keynote speaker at the event, U.S. Sen. Dean Heller, R-Nev., talked about the importance of renewable energy.

During the last legislative session, Heller co-sponsored the Energy Storage Tax Incentive and Deployment Act that established investment tax credits for business and home use of energy storage.

Heller said that he wants the renewable efforts to continue.

“I certainly want to see expansion of solar energy in my state,” Heller said at the event.

Heller also talked about the shift in attitude toward green energy and technology in the younger generation.

“Has this world changed in the last 20 years? The question is what’s going to happen in the next 20 years,” Heller said.

VEA provides service to more than 45,000 people within a vast 6,800-square-mile service area along the California-Nevada line, with the majority in Nevada, officials said.

At the District 3 annual meeting at the Beatty Community Center on March 8, Husted announced that Beatty will be the first all-fiber-optic community in Nevada.

“Today, we are still dreaming,” Husted said. “Our fathers dreamed of a better community for electricity and today, we are still dreaming how we continue to evolve this company for the betterment of the communities and member-owners that own us,” he said. “And our continued evolution is an acknowledgment of the lessons that we learned, and then, it’s our gift to the future member-owners of this company.”

The technology and new memberships are ushering in different tasks and journeys at VEA, Husted said.

“But we are still dreaming, and our gift to the future then is dare to dream, be courageous, have your conviction and your commitment to make your dreams the reality, that’s what Valley Electric is doing today,” Husted said.

Heller also reiterated his opposition to Yucca Mountain at the VEA meeting.

During the question-and-answer session, Heller was asked about what’s going on with the stalled project about 90 miles northwest of Las Vegas.

“All I know is Washington, D.C. is doing it wrong,” Heller said under a loud round of applause.

In an interview with the Pahrump Valley Times, Heller said that his goal is to get out of the budget the $120 million that was allocated by the Trump administration for the Department of Energy to restart the licensing process for Yucca Mountain.

“If your sole purpose for nuclear waste is to ship it to Nevada and bury it in the ground, I’m against it,” Heller said.

Today, the House Energy and Commerce subcommittee is to have a hearing to begin the legislative process to revive the project that was mothballed by the Obama administration. The hearing is an initiative of John Shimkus, R-Ill., the leading proponent of Yucca Mountain in Congress and subcommittee chairman.

“I believe that the sole purpose of Shimkus being in Washington, D.C. is to try to figure out how to get nuclear waste to Nevada,” Heller told the audience.

Heller criticized the legislation titled the “Nuclear Waste Policy Amendments Act of 2017” that will be discussed during the hearing.

Heller said through the bill, Shimkus plans to eliminate permits to test the water, test the air, “stripping the state of any opportunity to be able to push back” to Yucca Mountain.

“That’s what he is trying to do,” Heller said about Shimkus.

Heller said he plans to be at the hearing on Wednesday. Reps. Titus, Kihuen and Rosen also said they will testify at the hearing.

Heller also toured VEA’s headquarters and Desert View Hospital in Pahrump where he cut a ribbon for a new fiber-optic line that went into operation last week.

“If we have traumas that come into our emergency room, it’s really important that those images get to a radiologist,” said Susan Davila, Desert View Hospital CEO.

The new connection is especially important as those images sometimes need to be transferred to hospitals in Las Vegas when no radiologist is available at the Desert View Hospital in the after-hours.

“That can make a difference in a patient’s life, so it’s really important to have this,” she said.

VEA established broadband connection to the hospital in July 2016. The speed of service provided by the VEA to the Desert View Hospital is 500 megabits.

Heller lauded the partnership between VEA and Desert View Hospital.

“I believe that the platform that Valley Electric has, what they are able to express and show, what they can do in this community is something that needs to be copied and is being copied around the country,” Heller said.

The expansion of VEA’s services in the area and the Desert View Hospital “is second to none” in Nevada, Heller said.

“I believe VEA is at the forefront of all these initiatives,” he said. “We are looking at the expansion, watching what they do at the hospital, and how Valley Electric has allowed them to be a full-service hospital for this community.”