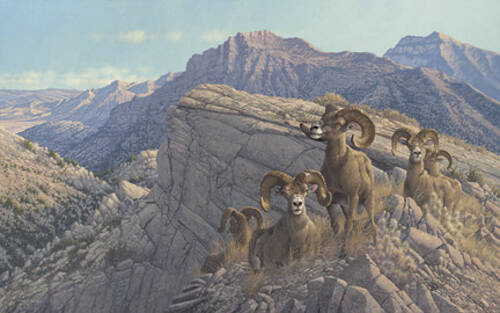 Special to the Pahrump Valley Times The inspiration for hunting artist Michael Sieve's painting, "Desert Kings" came on a scouting trip with this author. 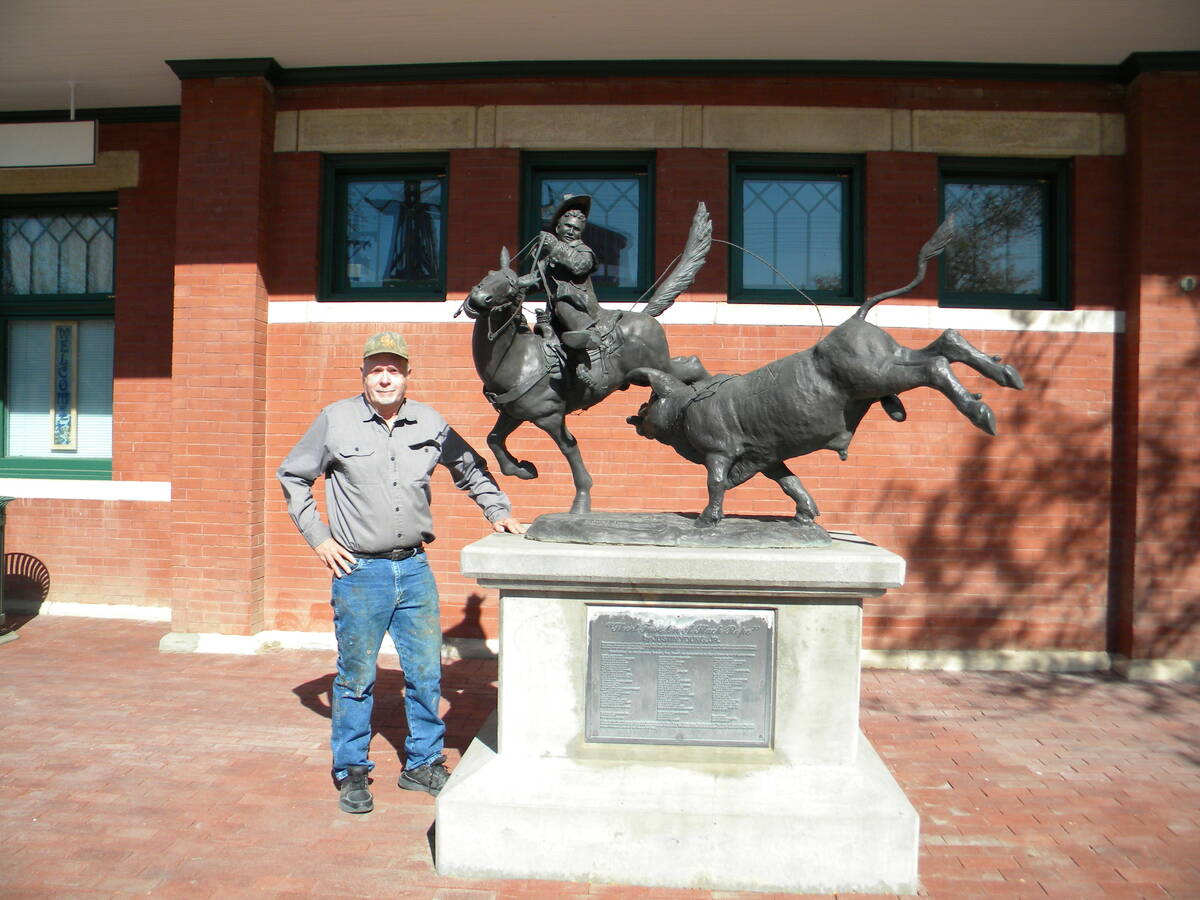 Special to the Pahrump Valley Times “Short Fuse on a Slack Rope”, a three-quarter life-size detailed depiction of a rider and a roped bull that gored his horse during an annual round-up, stands in front of a rail depot.

While sitting at my desk, having just returned from a Colorado elk hunt, and eating a plate of elk track stew, I was reflecting on great wildlife artists and hunters.

Yes, the elk won this time.

It was, however, a great hunt, even though it didn’t help fill the freezer.

The goal of every hunt is to bring home the harvest; the reward for the hunt is being away from the crowds, the busy lives and distractions and visiting with friends old and new. This elk hunt was great. I shared the campfire with my friend, artist and sculptor Justin Young, and the stories flew of great hunts both locally and around the world, with many shared experiences.

However, Justin Young is not only a world-renowned sculptor and artist, he has also studied wildlife in Africa, Asia, Australia and New Zealand. He has a lifetime of hunting in his native North America from Canada to Mexico, but his heart is at his home in Colorado and the West.

During all of these hunting expeditions Justin always took time to accurately measure the animals he had taken, including the length of their legs, ears, body, horn and antlers. All so that he could recreate their precise dimensions in his paintings and sculptures — a true scientist and artist.

His scientific and art background began at an early age from his family of artists. At age nine his grandmother prepared an area, with art materials, in her studio for him and said, “This is where it begins.”

During this time his uncles and brother began teaching him the finer points of hunting ducks and rabbits. The stage was being set.

I was reminded that many great artists, sculptors, painters, and writers share a true passion for conservation, hunting, fishing and exploration. Their experiences end up in bronze, on canvas or paper; all are story tellers. Of course hunter writers are well represented by Hemingway, Ruark, Capstick and many others.

While in camp Justin told of an experience he had while participating in a cattle round-up with some of his rancher/hunter friends. The topic of roping a bull came up and one of the cowboys told of how he roped a bull which then turned on him and going under his horse gored and threw the rider and horse in the air. All survived, but a lesson was learned the hard way. A second cowboy chimed in with the story of roping a bull, wrapping the rope on a trailer and dallying-up; the bull then ran, pulling him hard against the trailer.

He survived, but learned a lesson.

A third told of losing a thumb after taking a double wrap on his hand; he had the proof on his right hand. All of the “oldtimers” had a story and learned the lesson.

Justin’s “Short Fuse on a Slack Rope” a three-quarter life size detailed depiction of a rider and a roped bull that has gored his horse during the annual round-up stands in front of the Lamar Rail depot, a heritage site. The rider surely knew that you never rope a wild bull, but several friends of Justin have tried this experience. The lesson learned is, you never control a wild bull or control other natural phenomena. In Justin’s words, “It’s a life lesson on surviving the West.” This piece is a monument to that belief.

Another of my favorite hunting artists is Michael Sieve. While on a scouting trip with Michael in an area where I successfully hunted a Desert Bighorn sheep he envisioned something beyond my hunting story which resulted in his painting, “Desert Kings.”

He was able to visualize and bring this adventure to life because of his decades of hunting experiences in his native Minnesota as well as adventures in Africa, India and South America.

Michael creates award-winning paintings not only because he has seen much of these countries, but because he has become part of them and their wildlife, as our forefathers also became one with nature and shared experiences of its beauty and dangers.

The painting “Ivory Hunter” is a fine example of how he could imagine and capture the feel of danger and depict the life of an early ivory hunter of the late 1800s. These are both included, with stories, in Michael’s new book, “An Artist’s Life.”

Bottom line, we need our great wildlife artists like Justin, Michael, Hemingway and many others who can share their insights through their works. I hope you are able to search out some of these works and become inspired as I and many others have.

For more information on these artists go to: www.justiniyoung.com and Michaelsieveart.com

Dan Simmons is a columnist in Pahrump. His columns appears in the Pahrump Valley Times on the first Fridays of each month. Contact him at dansimmons@usa.net or visit us at www.sportsmansquest.org.