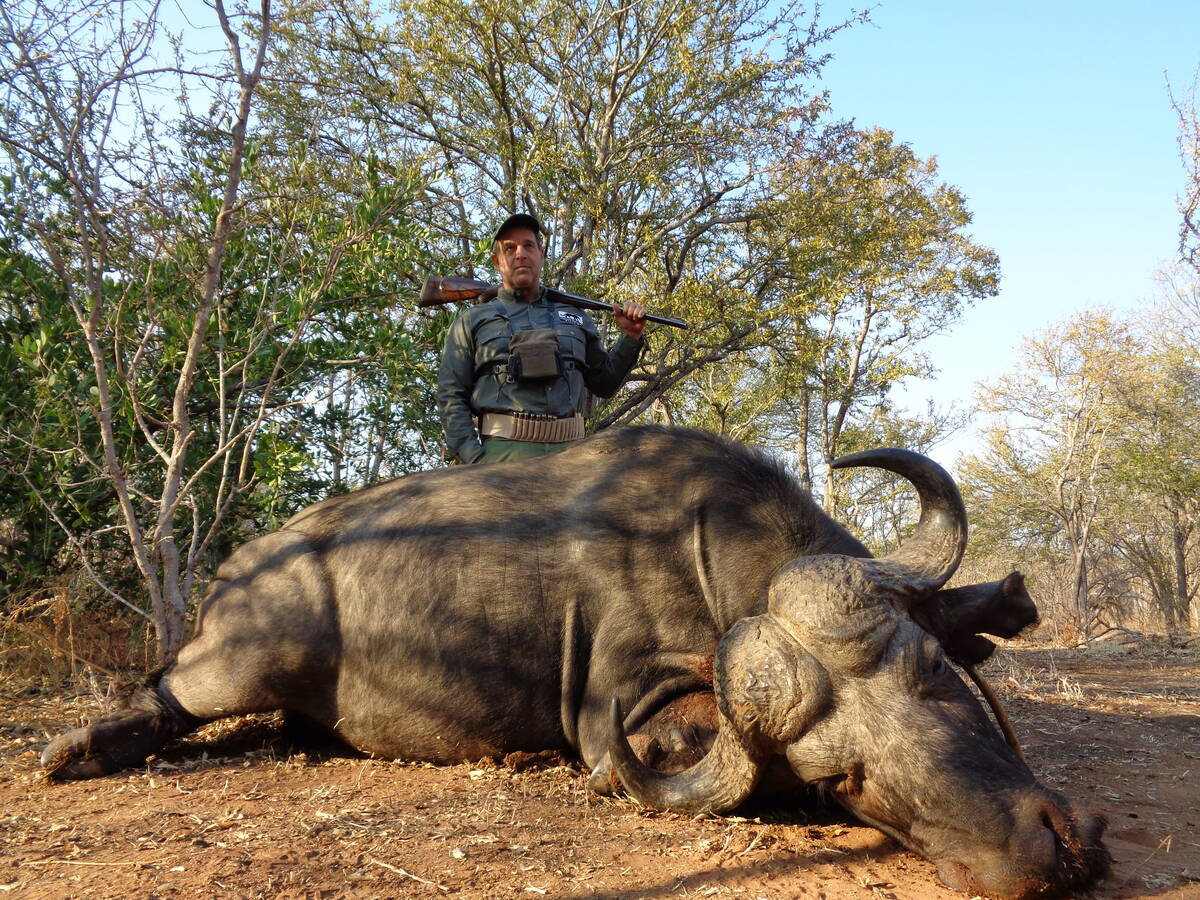 Special to the Pahrump Valley Times Bill Wilson fulfilled a life-long dream of hunting big game on a safari during his trip last year to Zimbabwe, where his prize was this 1,200-pound African cape buffalo. 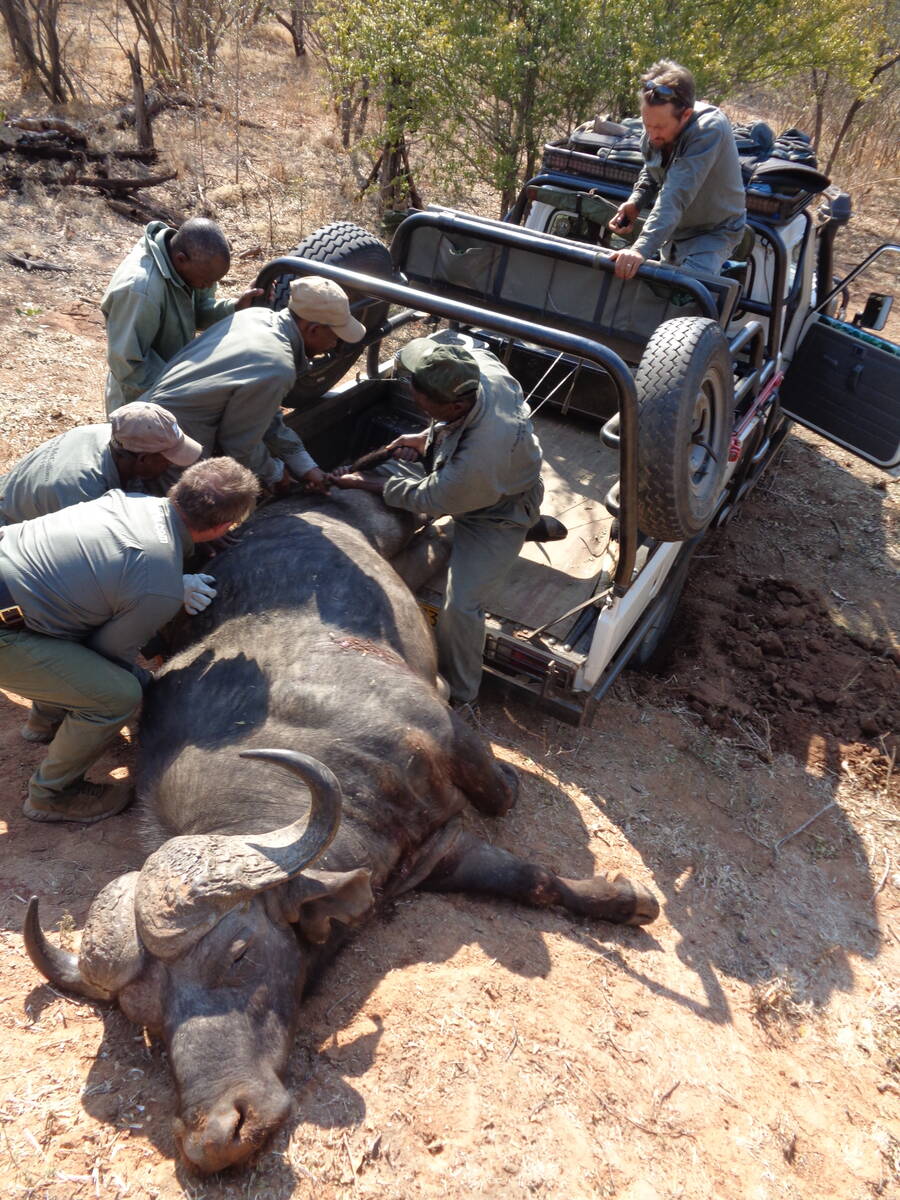 Special to the Pahrump Valley Times The team of trackers help get the cape buffalo into the back of a Land Cruiser for the trip back to camp to butcher and distribute the meat, some to local villagers.

It’s a new year with new opportunities and possibilities. Now it is time to set our priorities and make plans.

My friend Bill Wilson did just that this past year as he set his sights on an African Cape Buffalo safari in Zimbabwe.

As a former Navy Seal and commander of Seal Team One, he set out on a mission to fulfill a life-long dream of hunting Africa and its dangerous game.

It all started at a very young age with his pastor father and librarian mother moving often; books became his friends. One of his fondest memories was reading at the age of eleven Robert Ruark’s “The Old Man and the Boy.” It was followed by J.A. Hunter’s travels in Africa and Hemingway’s African hunting adventures.

He was hooked and the dream began.

His library grew through the years as he researched every aspect of hunting, beginning with deer and birds and grew to big game and firearms.

With his retirement from the Navy he finally had time to pursue his dreams. With the help of his friend Michael Tenny, an experienced international hunter and adventurer, he decided on a proper big game rifle to take to Africa and a premier PH (Professional Hunter) to organize the hunt for an animal known as “Black Death.”

They decided on a Holland and Holland Royal double rifle in .458 win. mag. as an appropriate firearm. Legendary P.H. Buzz Charlton would outfit and guide the hunt in Zimbabwe with his well-trained team of trackers.

It would be a ten-day hunt and as they were all in excellent shape they planned on hunting fast and hard with many miles of scouting and tracking. Bill benefited from his many years in the military throughout the Middle East.

They hunted from sunup until sundown and Bill lost 10 pounds the first week.

He became exceptionally respected by the native trackers for his stamina and stealth. He also benefited by learning a number of basic words in their language which he also found beneficial from his military experiences. It was appreciated and they became a tight team.

When they found a promising group of Cape Buffalo they stalked downwind with the goal of intersecting their movement. The trackers hunted like wolves and they admired Bill’s skills and training as they passed on several good bulls hoping to find an old “dugga boy”.

On the fourth day it was up at a cold 4:30 a.m. with the smell of a Mopani campfire and a quick, but well prepared, breakfast. It was then in the Land Cruiser at 5:30 a.m.

They soon found a good track, following it on foot they eventually found the herd and set up in a position 600 yards ahead of them. They passed on another nice bull because of their dedicated hunting ethics. Everything must be right: the animal, the shot and the time. It wasn’t about the killing, but about the hunt, the smell and the feel of Africa.

On the fifth day they found the “right bull.” He surrounded himself with other buffalo as they moved forward. The trackers, however, were able over the next six hours to follow the bull’s tracks in and out of the herd by anticipating its movements.

The hunters set up on a river bank and waited. The bull came with two others and Buzz whispered, “take him.” One shot from the 500-grain Holland and Holland spun the bull around twice and he was down for good.

Then the fun began, 1,200 pounds of Cape Buffalo in the back of the Land Cruiser with six people; they were headed back to camp. The animal was then butchered; all of the meat was used and distributed, including the stomach and intestines. The hide was made into leather which was appreciated by the trackers and local villagers who made the meat into Biltong (jerky). Bill enjoyed the back strap, cut into steaks and grilled over the campfire. He also enjoyed a pure and ethical African experience.

Bill attributed the success to Buzz Charlton, the PH who is known to wear only Crocks, with a portion of tire tread sewn to the sole while in the bush and of course, “The Princes” as he called his new friends, the trackers.

There was Nyati, a school teacher; Crayton, a master tracker who was able to find a fleck of blood under an out-of-place overturned leaf; and Eddie, the driver, mechanic and navigator.

Bill is no doubt planning his travel adventures for 2023. We will all be doing the same and have greatest hopes for the new year. Here’s wishing you and yours health, peace, safe travels and prosperity.

Dan Simmons lives in Pahrump. His outdoors columns appear in this publication on the first Friday of each month. 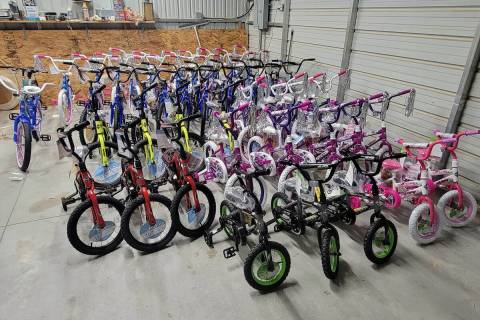 Avery Sampson’s 3rd Annual Bikes for Christmas drive is only a few short of its goal of 60 bikes this year.