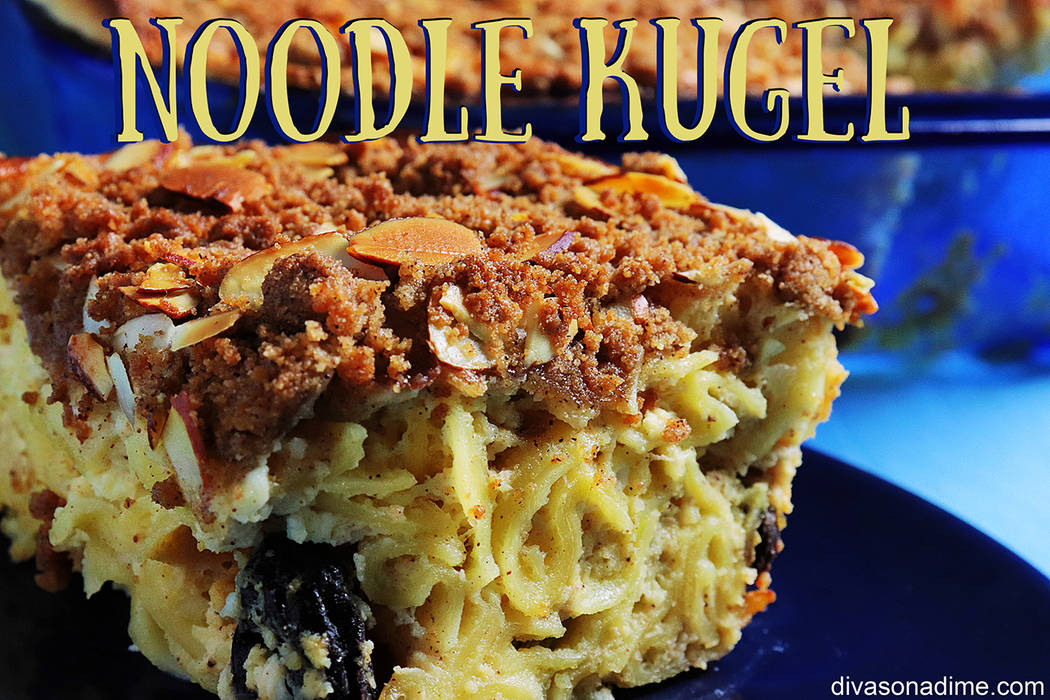 Patti Diamond/Special to the Pahrump Valley Times This is a sweet side dish often served alongside tender, juicy brisket. It’s great for brunch or dessert, too.

As I write this, my home smells divine, swirling with vanilla, cinnamon and the warm, cozy aroma of custard baking. I’m trying something new – Noodle Kugel. It’s been on my list of recipes to research for years and I finally did it. And boy, is my family happy I did!

Noodle kugel is a traditional Jewish holiday casserole made with egg noodles, baked in a sweet or savory custard. If you grew up eating creamy, rich kugel, you’ll bet that your family’s recipe is the best! And you’d be right.

Now, I don’t want to step on anybody’s toes, but I researched and found literally hundreds of variations.

I experimented and took what was consistent within the recipes, what I felt would be wildly, universally popular, creamy in the middle, crunchy on the top, and then worked to keep the cost down.

I am by no means an authority on traditional Jewish cooking. But I know what people like. My nephew described it as the creamiest bread pudding with noodles rather than bread.

I can’t disagree. This is a sweet side dish often served alongside tender, juicy brisket. It’s great for brunch or dessert, too.

The first time I had kugel was at Katz Deli in New York. Theirs had golden raisins, pineapple and mandarin oranges. I have friends who top theirs with crushed corn flakes or graham cracker crumbs. I’ve seen peaches, apple pie filling, apricots, even dried cherries. Safe to say, you can add what makes you happy.

Bring a pot of salted water to a boil. Cook noodles for 6 minutes, or until al dente. Drain well and return to pot.

Meanwhile; preheat oven to 325°F degrees. Butter a 13×9-inch baking dish; set aside. Into the bowl of an electric mixer with the paddle attachment or mixing bowl with a hand mixer; blend softened cream cheese and sugar until fluffy.

Add the sour cream, cottage cheese, melted butter, eggs, vanilla, cinnamon, salt. Remove from the mixer and stir in the raisins by hand.

Add the egg custard mixture to the cooked noodles in the pot, stirring to combine. Place the custardy noodles into the prepared baking dish. Cover the dish with aluminum foil and bake for 35 minutes.

Meanwhile, make the streusel topping. In a medium bowl, combine brown sugar, flour, cinnamon, and salt. Cube the butter and rub it in with your fingertips until the mixture has a crumbly texture. Refrigerate until ready to use.

When the kugel comes out, remove the foil. Sprinkle the streusel topping evenly over the top, and bake uncovered for 35 to 40 minutes more, or until the streusel is crisp and lightly browned. Cool for 20 minutes, cut into squares and serve.

If you’d like, you can soak your raisins before adding them to the custard mixture.

I, being the meshuggeneh shiksa (crazy non-Jewish woman) that I am, soaked my raisins in spiced rum. Delicious! You’ll need to decide if that’s appropriate for your holiday kugel.

My family came home while the kugel was in the oven and swooned at the perfume in the air. This holiday tradition, in families for generations, just became a tradition in mine.